What impact do humans have on the planet? How have we changed our home in unexpected and lasting ways.

The Anthropocene exhibition, presented by Scotia Wealth Management, documents how humans have changed the face of the planet. Viewers will be immersed through a powerful series of new photographs, including large-scale murals augmented by film extensions, film installations and augmented reality (AR) installations.

While every country they visited had fascinating moments, Burtynsky says that the most moving moment for him happened in Kenya. The trio attended the ivory burn at Nairobi National Park in April 2016, where 105 tonnes of confiscated elephant tusks and 1.35 tonnes of rhinoceros horn were publicly incinerated as a call to halt all trade in ivory and bring awareness to the risk of extinction of African elephants. The burned ivory and rhinoceros horn was estimated to be worth over 100 million dollars.

“Jennifer, Nick and I documented through photogrammetry the largest pyramid of tusks, horns and ivory carvings – the President’s pile – before it was burned. In the Anthropocene exhibition, using the AVARA app, viewers will be able to summon a near-to-scale rendering of this tusk pile in augmented reality on their phones, tablets or screens,” says Burtynsky. “This AR Installation in particular drives home the reality of human-caused extinction by allowing viewers to understand the scale in an experiential sense. Being present for this burn was something I will never forget.”

Burtynsky explains what he hopes people take away from visiting Anthropocene, “We have been saying for some time now that ‘the shifting of consciousness is the beginning of change’ and I think that’s what we hope comes out of this project - for these artworks to inspire awareness in our audience, and have that awareness turn into action.”

Anthropocene is organized by the Art Gallery of Ontario and the Canadian Photography Institute of the National Gallery of Canada, and in partnership with Fondazione MAST in Bologna, Italy, where the show will travel in the spring of 2019.

Anthropocene: The Human Epoch, an accompanying feature documentary from Baichwal, de Pencier and Burtynsky, will be in select theatres from September 28. More information here: https://theanthropocene.org/film.

Get a sneak peek at a couple of the pieces below: 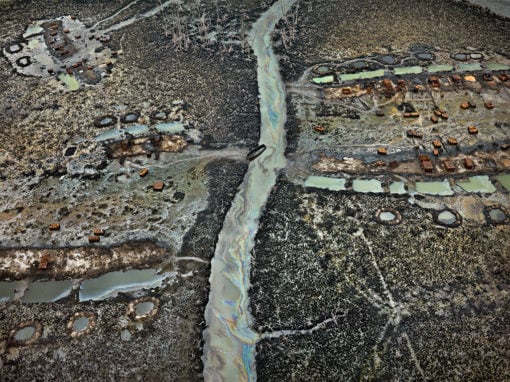