Canadian women artists in the spotlight at Washington, D.C. Embassy

(Monica Tap, pictured above, is one of the Canadian artists whose work is being exhibited at the Embassy of Canada in Washington, D.C. Photo by Augostino Soares.)

More than two-dozen Canadian women have embarked on a special assignment at the Embassy in Washington, D.C. — cultural diplomacy

Works by the 27 artists are being showcased in an all-female exhibition at the Embassy of Canada Art Gallery, now open to the public until April. After that, these 38 pieces — ranging from paintings to digital collages — will be installed in prominent locations throughout the embassy building, to be seen by key politicians, dignitaries and other visitors.

Monica Tap, whose oil painting Amnesia Garden (in another life) is one of eight works from the Scotiabank Fine Art Collection chosen for the exhibition, says being included in this showcase of Canadian female artists is "deeply meaningful."

"The fact that the work is a little bit of an ambassador makes me incredibly happy," said Tap, who is based in Toronto and teaches at the University of Guelph.

The Embassy of Canada on Pennsylvania Avenue has more than 180 pieces by Canadian artists on display throughout its offices, on loan from the Scotiabank Fine Art Collection and other institutions.

Robyn McCallum, Senior Manager and Curator at Scotiabank, said this latest exhibition, called A New Light: Canadian Women Artists, arose out of conversations she had with the embassy about diversifying the artwork as they renewed the partnership. The pieces on display at the embassy were largely by men and didn't represent all the provinces and territories as well, she said. 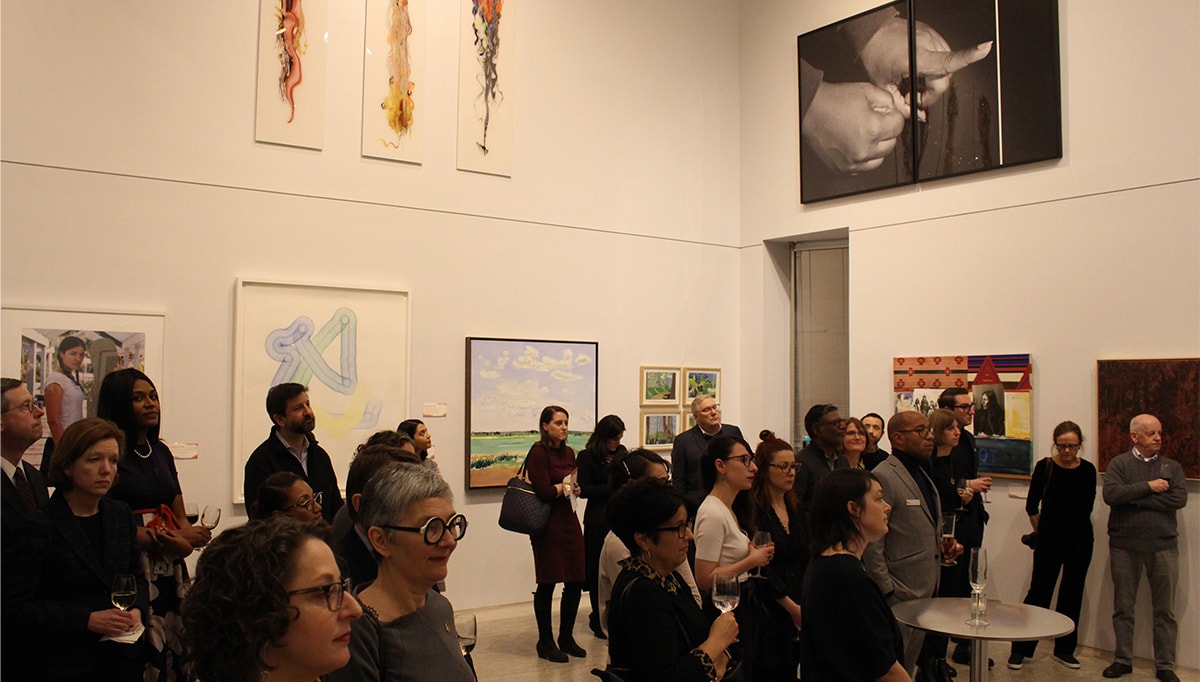 The exhibition called A New Light: Canadian Women Artists (pictured above), features 38 pieces in the art gallery at the Embassy of Canada in Washington, D.C.

"The conversation was initially about how can we bring more diversity into what's on display at the Embassy," McCallum said. "It mirrored what we are trying to do with the Scotiabank collection overall at the same time."

As they began looking to add more artwork by women, it presented a good opportunity to showcase it in an exhibition at the Embassy gallery, she said.

"It happened organically, as people became more excited about the idea," McCallum said.

The show, which opened on Feb. 7, features 13 artists from the Global Affairs Visual Art Collection, six from the Canada Council of the Arts’ art bank and eight from Scotiabank's collection, according to the Canadian embassy.

"It's all by women, but also we tried to be very cognizant of a broader diversity," said McCallum. "We have art by indigenous artists represented, and we have artists from the West Coast and the East Coast."

Scotiabank currently has 15 pieces on display in Washington, including the eight in the New Light exhibition.

"The artists are all so strong," said Tap. "You could have curated 20 different exhibitions. There are so many really amazing Canadian women artists. I am honoured that my work was included for this show."

While there are numerous accomplishments by female artists to celebrate as the world marks International Women’s Day on March 8, it’s also clear that there is much more work to be done.

Women continue to be underrepresented in art galleries globally, less recognized, and paid less than their male counterparts, said McCallum.

A recent analysis conducted by Michael Maranda, assistant curator at the Art Gallery of York University, found that although women make up 63% of the artist population, just 28% of women artists are represented by galleries, compared to 36% of male artists.

Also, using 2012 labour force data, Maranda determined that female artists earned 40 cents for every $1 male artists earned, based on the average hourly wage for artists, taking into account sales, grants and other ways to earn a living.

Works by women comprised just 11% of acquisitions and 14% of exhibitions at 26 major American museums between 2008 and 2018, according to a joint investigation conducted by publications artnet News and In Other Words.

This lack of representation is a key factor contributing to artist gender wage gap and highlights why it is important for work by women artists just to be seen, said McCallum.

"You need collectors to see the work and be exposed to work by female artists in order for them to thrive within the industry," she said. "Even though it seems like a small thing, just having your work put up on display in a context like this and being vetted by all the curators that put a show like this together signifies that this is important work as well, and it is worthy of attention."

The inspiration for and meaning of Amnesia Garden, in Tap’s own words:

"This piece was the first in a larger series on ornamental gardens, and drew especially from a garden that I visited a few years ago in northern Germany, a rhododendron garden that was in full bloom.

"I got there at dusk one night and it took my breath away how much like a painting that particular garden looked. I had never seen rhododendrons that large to begin with, and it was the way the light was that evening, and the way that everything glowed in the reflecting pond. It was like walking through a three-dimensional painting.  I took lots of photographs, and the photos also had this very strong romantic painterly feel to it. I thought I would just unapologetically dive right in into it.

“It also had a connection to someone really important to me in my life, my mother-in-law, who had recently passed. She was a wonderful gardener – so the painting is a bit of a tribute in that way too, or an elegy. She loved to tour us through her garden, and when she couldn't recall the name of a plant she called it like the 'amnesia this' or the 'amnesia that.' And because she knew the Latin names of everything else, it would normally take you a few beats before you would catch on.

“The term Amnesia Garden had a resonance to it that I liked a lot because of the relationship of gardens to time, the relationship of amnesia to time, the sense of remembering and forgetting that goes on, seasonally as well as metaphorically. I've been reading recently about how the idea of a garden can offer a way to think about this particular moment in terms of climate change, and ecology, and how we might cultivate our relationship as humans to the land as stewards rather than plunderers."