Tangerine CEO: A catalyst for change

Tangerine Bank CEO Gillian Riley was in her early teens when banking piqued her interest.

Automated bank machines were just being rolled out and her younger brother was so fascinated by them that he deposited, and immediately withdrew, $20 — 20 times.

“He couldn't get over the fact that that’s what a bank machine did,” she said. “And I was so fascinated with all the transaction slips that were in our house. I was like, ‘Wow, that is quite amazing. A bank isn’t just the place where money is stored, but they actually have innovations and technology.’”

Little did she know that both banking and technology would play such a key role in her future career, eventually, as chief executive officer of one of Canada’s first digital banks, with more than two million clients.

In addition to setting a strong example for the next generation of women business leaders as one of the relatively few women CEOs in Canada, Riley’s ongoing work to advance women and advocate for inclusive workplaces has been recognized by Catalyst, a global organization dedicated to accelerating and advancing women into leadership.

She was named a Catalyst Honours Champion for 2020 earlier this month for her efforts at both Tangerine and Scotiabank, including founding The Scotiabank Women Initiative™, which supports women-led and women-owned businesses.

“It takes a village to do these things, and people have been so amazing at getting behind this and bringing it to life,” Riley said.

Her journey began in Calgary, where her father worked for the railway, a job that would later see the family transferred to Montreal. She grew up with her two brothers, and sports were a key backdrop to her childhood, Riley says. She played competitive soccer, as well as basketball, tennis and skiing.

“I grew up in a very athletic environment,” she said. “Sports were a big part of my DNA. It taught me a lot about teamwork, leadership and decision making.”

The advent of the bank machine was a key childhood memory for Riley, but she wouldn’t begin seriously thinking about the industry as a career until later.

After she completed her economics degree at the University of Western Ontario, she did an internship at one of the high-street banks in the U.K., working on the foreign-exchange trading floor.

“I thought, ‘Wow, this is a fast-paced environment. There's lots of interesting things going on here’,” she said.

Riley later began working at another large Canadian bank, in a branch manager training program. After she completed her MBA at the Barney School of Business at the University of Hartford, Riley got her first role at Scotiabank. She worked her way up through various areas including commercial and corporate banking, retail products (mortgages, deposits and payments) and by December 2015, she was appointed Executive Vice President of Canadian Commercial Banking at Scotiabank.

“Every role I’ve had, it’s been with the customer,” Riley said. “Whether it’s retail, small business, commercial, corporate lending as well, I have a good understanding of the bank’s customer base. That's everything for me. I always want to view things from a customer lens.”

Even though it was banking technology that initially caught her eye about the industry, she had not been involved in that side of the business.

That is, until the opportunity to run Tangerine Bank came along. Tangerine, originally called ING Direct Canada when Scotiabank acquired it in 2012, was one of Canada’s first digital-only banks, operating without traditional bank branches.

For Riley, the job was very compelling.

She took on the new role in December 2018 and one of her first tasks was to hire a new chief technology officer. She sought help from Scotiabank Chief Technology Officer Michael Zerbs and others to answer her questions.

“It's such a big learning for people, to not be afraid to ask questions.” 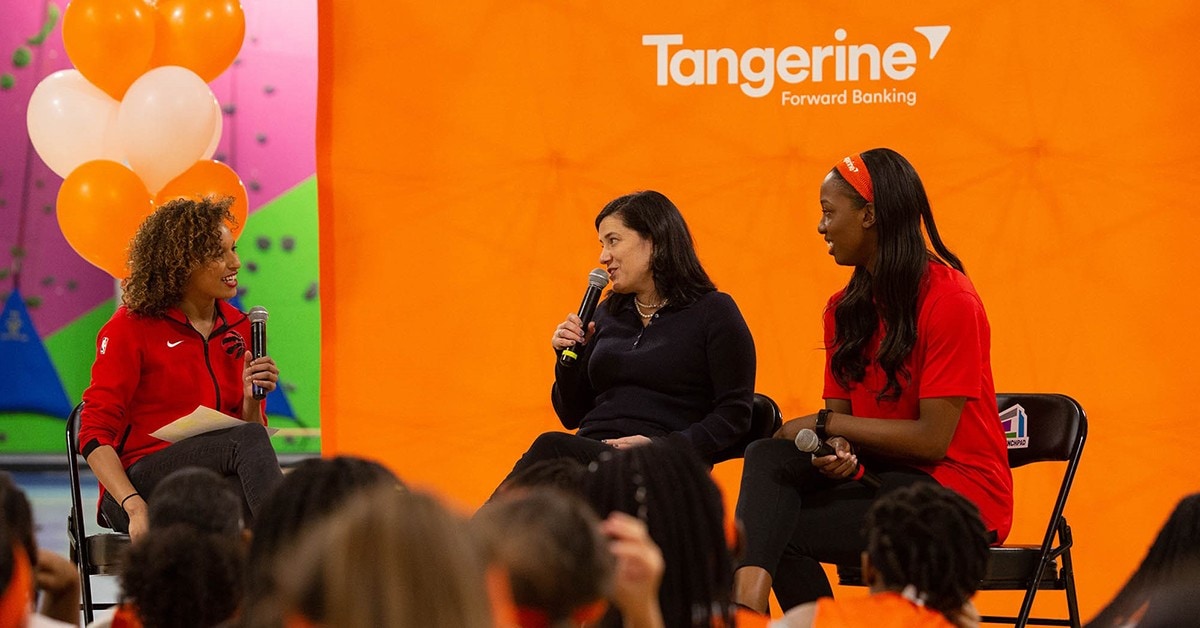 Tangerine CEO Gillian Riley shares her experience and reflections with young women and girls at the Tangerine Community Gyms event in celebration of International Women’s Day in 2019.

Among her first priorities at Tangerine Bank was to bring in more women into the employee base at manager level and above, and into the boardroom.

The long-time Scotiabanker implemented new hiring practices to ensure there was diversity in the candidate pool and on hiring panels. She also brought more women onto the Tangerine Bank board. Within her first year, she had moved the dial.

While embarking on a new chapter of her career, she also helped launch The Scotiabank Women Initiative.

The challenges Riley saw women entrepreneurs face in her previous role, in commercial banking, drove her to create the program and serve as its executive sponsor.

She remembers vividly one case in particular – a woman who had started a frozen food business.

“She was so keen to get going, and she had so much passion. You could tell she was going to be hugely successful, but she was having trouble getting financing,” Riley said. “I was so impressed by her that I wanted to support her, and we were able to finance her.” She has since sold the business and done very well.

Evidence of these hurdles for women would come up again and again. While on a panel discussion about international trade with several women business owners, for example, she heard them describe their frustrations in dealing with banks.

“I came back to the Bank and I thought to myself, ‘Okay, we really have to look at this’.”

The track record for women seeking financing was dire, she found. For example, just 4% of all venture capital goes to women entrepreneurs, she said.

“It was shocking to me and as we delved deeper and deeper, you could just see there were so many gaps,” she said. “It struck me as such an opportunity to help engage. And it wasn't just about getting capital, it was about how to put the plan together, how to network, how to build confidence for women to be able to get the financing they needed to grow their business, to take it to the next level.”

That idea grew into what would become The Scotiabank Women Initiative, which focuses on helping women-led and women-owned businesses get access to capital, mentorship and education.

Since it launched in December 2018, the initiative has engaged with 1,900 women through its Un-Mentorship Boot Camps and Mentorship sessions. As well, it has deployed more than half of the $3-billion in capital it earmarked for women-led businesses in its first three years.

In 2019, The Scotiabank Women Initiative expanded to Global Banking & Markets to help women leaders advance their careers and address the lack of women corporate leadership in Canada, as well as support the companies who stand behind an inclusion agenda. Later this year, SWI will expand again in Wealth Management – with a focus to empower women to be an active voice in important financial decisions for their family, their business and their future.

The initiative has also ramped up its programs to support women during the pandemic, including boosting access to expert advice for women entrepreneurs in Quebec and an educational podcast series focused on resiliency during these challenging times.

Digital banking on the rise

“We want to provide resources and tools that can help that digitization, which is going to change the way the world works. What would have taken 10 years probably happened in five months. Helping women do that will be really important. We want to make sure that women are supported.”

Riley is also exploring additional ways to make the workday more flexible for Tangerine Bank’s roughly 1,000 employees. One option on the table is to record meetings, so employees can watch them later and be more flexible with their schedule, she said.

“I'm just creating more flexible work opportunities for everyone, but especially for women,” said Riley, who herself has three children, who are now in their late teens and early twenties.

For Tangerine Bank, the COVID-19 pandemic has been both a challenge, with a large swath of its employees now working remotely, and an opportunity, as it has accelerated the adoption of digital banking.

Riley says she leaned on the lessons she learned playing sports to help her navigate these unprecedented times. She recounted how she learned resiliency and positivity as a soccer team captain, after losing a big game and picking herself, and the team, back up.

“Through COVID-19, that was really important,” said Riley. “My role is to be really calm, be really positive, help people do the things they needed to do. Keep going.”

Deposits are up as Tangerine and other banks have worked with the federal government to distribute billions of dollars in support payments via direct deposit to Canadians whose jobs have been impacted by the pandemic. As well, new client growth pre-pandemic versus post-pandemic is up by approximately 2.5 times more, and there is an uptick in transactions too.

“I'm very proud of what was accomplished. Getting all those government relief programs into the market, with such quick speed, it was amazing to watch. And the decision-making was very clear and concise, and people knew what they had to do. We were in this together, we were helping Canadians.”

How listening, and failing, lead to success: Scotiabank CHRO