Geena Jackson doesn’t call her new reality TV show a competition, she calls it a “co-opetition” – a combination of cooperation and competition. That better reflects the spirit of the show, she says, and of the people it puts in the spotlight.

Jackson is the executive producer of The Bears’ Lair, in which 18 Indigenous entrepreneurs vie for a share of $180,000 in cash prizes. Along the way, they receive group training and individual coaching to perfect their presentations and then make their pitches to the Bears, a panel of business experts. The premiere of the nine-episode series, of which Scotiabank is a leading sponsor, airs on the Aboriginal Peoples Television Network (APTN) on Sept. 6.

“I was so enamoured with shows like Shark Tank and Dragons’ Den, and I thought it would be great to have a show like that, but not where the judges take any stake in the business,” Jackson said. “Instead, there’s mentorship and guidance given right from the beginning. The contestants are collaborative, help each other and make connections. That’s why we like to call it co-opetition.”

A member of the Sechelt Nation on B.C.’s Sunshine Coast, Jackson has worked with Indigenous entrepreneurs for most of her career. She was the Small Business Officer for the Squamish Nation for 13 years, where she became very familiar with both the entrepreneurial potential of people in Indigenous communities, as well as the barriers they faced in becoming successful.

“There’s always a story. There’s always a pain point and there’s always something beautiful about someone who believes in themself,” she says. “Often they just need a cheerleader in the community, someone to help get over those first hurdles, and that has a ripple effect of encouraging other entrepreneurs.”

According to a 2020 report by the EDC, there are more than 50,000 Indigenous-owned companies in Canada, contributing more than $30 billion annually to the Canadian economy.

Tanja Perry, Scotiabank’s District Vice President for Alberta North/Northwest Territories, is similarly driven to help Indigenous communities access the resources they need to reach their goals. She recently helped develop the Indigenous Financial Fitness program, in which Scotiabank provides facilitators to help individuals and communities develop and sustain their financial knowledge in a culturally sensitive way. 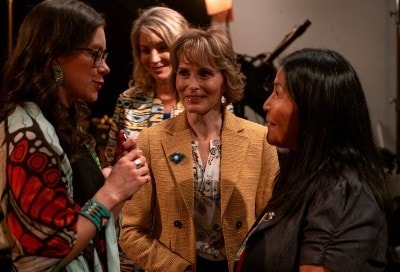 When she heard about The Bears’ Lair, she immediately saw its potential to spread the word about Indigenous entrepreneurship and help those entrepreneurs succeed.

“I saw it as a chance to celebrate the Indigenous entrepreneur and do it in a very organic way,” she said. Perry is not Indigenous herself, but her children are, and her allyship comes from many years of working with Indigenous communities in the Northwest Territories and through living out her children’s heritage.

“I’ve always been passionate about building community relationships with Indigenous businesses, nations and individuals and the show caught my attention right away as a way of doing that.”

Perry persuaded the Bank to become one of the leading sponsors of the program, which, among other things, gave Scotiabank the opportunity to have a representative appear as a guest judge on an episode. Suddenly, Perry was going to be a television personality. 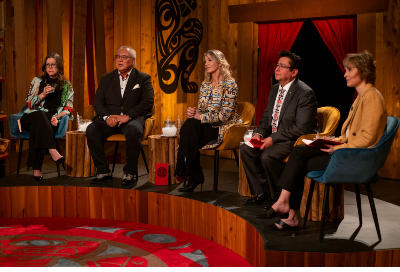 “I was just in awe of the judges and what they've accomplished in their lives and how they give back to their communities,” Perry said. “But then meeting the contestants and listening to their business models and seeing how their Indigenous cultures were deeply woven into that – I really felt privileged to be part of that journey, to share in their success, to celebrate their diversity, their resilience, their strengths.”

The contestants came from across Canada and ran businesses of many different kinds. Jackson couldn’t reveal much detail before the show airs but said one of the criteria judges used to pick winners was how much social impact their businesses were having.

“All of the judges’ decisions were based on, number one, are you hiring and training people in the community? What difference are you making for Indigenous people, not only in your community, but Indigenous people in general?” she said. “And it was a very difficult decision to choose because everyone had a story about how they were bettering their community and wanting to influence others. That’s what people are going to see during The Bears’ Lair, that this is what Indigenous people are about.”

Jackson is in conversations with APTN about doing a second season of The Bears’ Lair. In the meantime, she has other projects on the go with similar objectives.

One is the youth entrepreneur camps she organizes for Indigenous communities. In these three-day camps, with a graduation ceremony on the fourth day, 25 kids aged 12 to 17 learn the fundamentals of being an entrepreneur: what the business does, what it’s called, its core values, how to budget and make a business plan, e-commerce or bricks and mortar, and much more. Then they make a Bears’ Lair-type pitch, with their families and members of the community there to watch.

“We did one in Squamish, and 300 people showed up for the graduation for the 25 kids,” Jackson said. “It was crazy. Parents were crying, the pride that went with this, of hearing your 12-year-old talking about mission statements, or production, or how to source locally. The Chief and Council were blown away. And these kids, the pride that they showed when they were talking about their ideas— it was beautiful.”

Jackson is motivated by the social impact that entrepreneurs can have on their communities.

“There’s trauma from residential schools,” she said. “But educational opportunities and showcasing people and their successes is really going to change the Indigenous paradigm of where this is going with business and with employment and training and working with industry.”

Infographic: Year One of ScotiaRISE