A brief history of Scotiabank

On December 31, 1831, a large group of Halifax businessmen met in the Merchants Exchange Coffee House to discuss the need to create a public bank as an alternative to the privately owned Halifax Banking Company.

Three months later, on March 30, 1832, royal assent was given to the bill incorporating "the President, Directors, and Company of the Bank of Nova Scotia", with an authorized capital of £100,000 of which £50,000 had to be paid up before business could begin.

The Bank of Nova Scotia became the first chartered bank in Nova Scotia and held their first shareholders' meeting at the Merchants Exchange Coffee House on May 10, 1832.

By August 29 of the same year, The Bank of Nova Scotia opened for business in the John Romans's building. The original staff consisted of: Cashier (COO) James Forman: and Tellers Alexander Paul, Benjamin Carlile; and Messenger James Maxwell.

The Honourable William Lawson was elected as the Bank's first President.

On the eve of the 20th century, The Bank of Nova Scotia had a strong base in the Maritimes as well as the start of a national and international network.

In 1874, the Saint John, New Brunswick branch became the first Bank of Nova Scotia agency outside of Nova Scotia. Nine years later, The Bank amalgamated with The Union Bank of Prince Edward Island.

In 1882, the Bank began to turn its attention to markets beyond the Maritimes and an agency was opened in Winnipeg, Manitoba.

Western operations quickly shifted to the United States of America where agencies began opening in Minneapolis in 1885, and then in Chicago in 1892.

By 1889, The Bank of Nova Scotia's presence expanded southwards towards the Caribbean with the opening of a branch in Kingston, Jamaica, to facilitate the trading of sugar, rum and fish.

It was the first branch of a Canadian bank to open outside the United States or United Kingdom and formed the basis of what would become a thriving network spanning some 25 countries throughout the Caribbean and Central America - a footprint that established Scotiabank as the largest bank in the region and a continent-wide enterprise.

Eight years after The Bank of Nova Scotia ventured out to the Caribbean, the Bank opened its first branch in Toronto, Ontario in 1897.

By 1900, the Bank's General Offices were relocated from Halifax to Toronto.

Shortly after the turn of the century, the Bank turned its attention to Western Canada where branches began opening in Edmonton, Calgary, and Vancouver in 1903, followed by Regina and Saskatoon in 1906.

By the early 1900s, a coast-to-coast branch network had been established, which continued to accelerate through amalgamations with other major Banks.

With these amalgamations, The Bank of Nova Scotia firmly established itself as a national institution and major Canadian Bank.

By 1930, it had become apparent that the current Head Office and Halifax Main Branch (188 Hollis Street) was too small for one of Canada's fastest growing financial institutions.

On August 3, 1931, The Bank of Nova Scotia opened one of our most authentically Canadian buildings.

This jewel of Canadian architecture continues to house our Atlantic Regional Office, and Halifax Main Branch.

The many innovations pioneered by Scotiabank during this period include: Scotia Plan Loans, one of Canada's first consumer lending products; the public trading of gold; and the appointment of the first women branch managers in Canadian history.

In the 1960s and 1970s, Scotiabank began extending its network into Asia.

When the financial services sector was deregulated in the late 1980s and 1990s, the Bank further diversified its Canadian operations through major acquisitions, including investment dealer McLeod Young Weir (1988), and trust companies Montreal Trust (1994) and National Trust (1997).

During the 1990s, Scotiabank continued to expand its presence in Central and South America, making it one of the world's most truly international banks.

Today, Scotiabank has become Canada's most international bank and is known as Canada's gold bank.

From its establishment in a coffee house in Halifax, Nova Scotia, Scotiabank continues to grow and operate worldwide.

For more detailed information about Scotiabank, please contact us at archives@scotiabank.com. 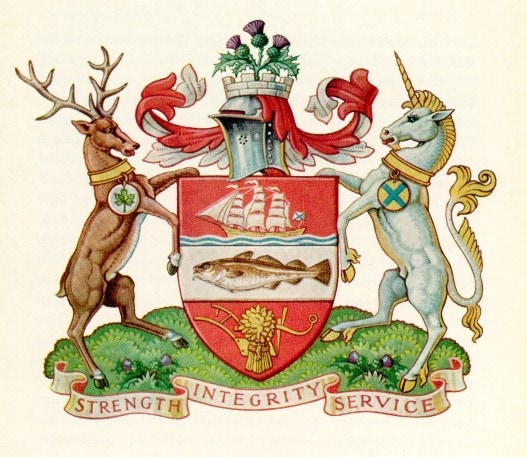 Colour reproduction of The Bank of Nova Scotia coat of arms. The Coat of Arms was designed by A. Scott Carter in 1921 and approved by the College of Heralds in 1951. Water colour of the John Romans' Building located at the corner of Granville & Duke streets in Halifax, where The Bank of Nova Scotia opened for business on 29 August 1832, its first location. 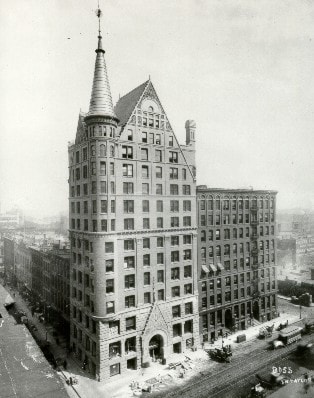 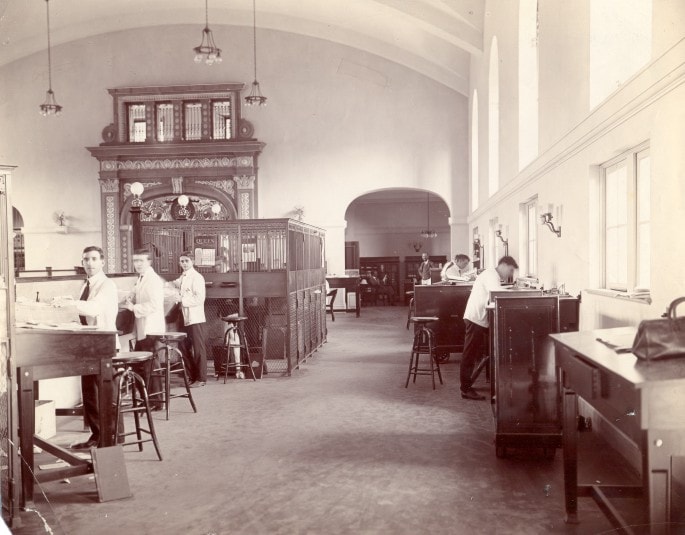 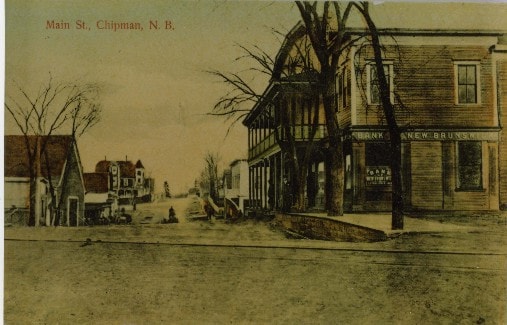 Postcard illustrating the exterior of The Bank of New Brunswick's Chipman branch, [14 July 1908 to 15 February 1913] 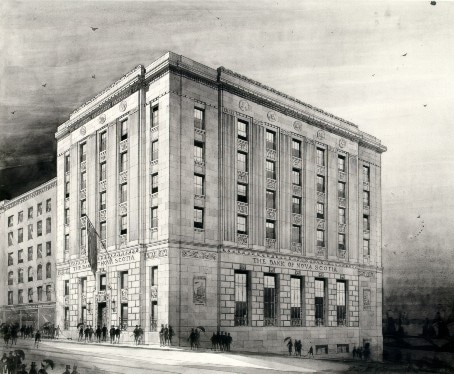 Exterior of building, at the corner of Hollis and Prince Streets. Ink drawing by John M. Lyle, Architect. [1930]. 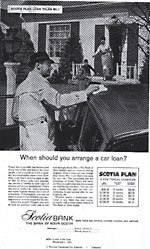 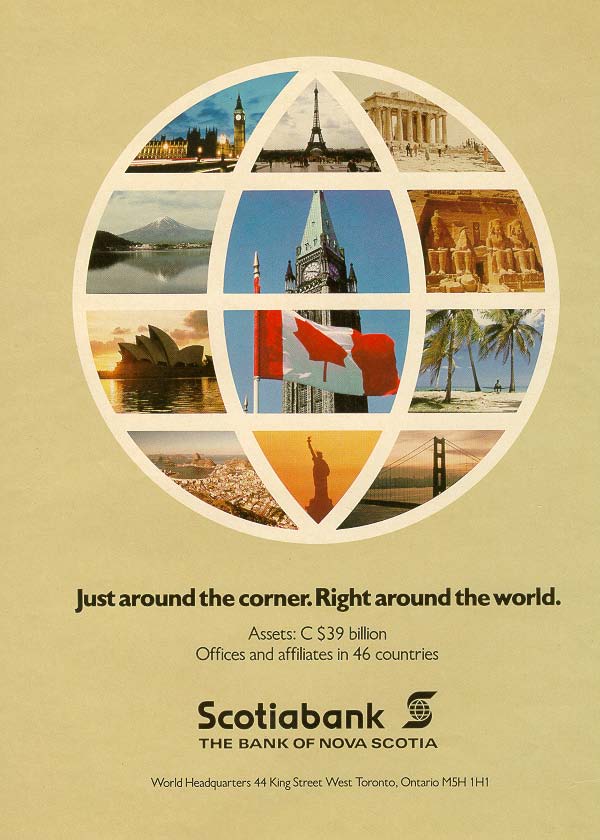 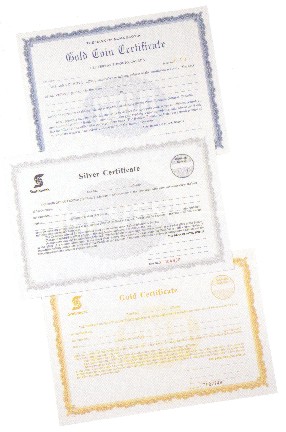