Softer headline growth on historical data revisions. Significant changes to April and May Canadian GDP data now make the 6%-plus national gains we had previously envisioned nearly impossible; as such, we have lowered our forecasts1 for all provinces this year (chart 1). We also assume a softer than previously projected expansion in the coming quarters, largely due to the effect of supply chain constraints on input costs and domestic production. The depth of by-province downward revisions reflect this effect, the relative strength of economic indicators in Q2, and the industry drivers of the April–June national-level GDP drop. The prospect of further significant historical data revisions remains.

Expansion still robust in 2021. While we have lowered headline growth numbers in light of significant unexpected revisions, we still expect all the provincial economies to bounce back nicely this year as they continue to reopen from last year’s COVID-19 lockdowns. Our forecast assumes that six provinces will witness real growth stronger than 4% this year—the first time since 2000.

Stronger commodity prices. We have revised forecasts for values of most commodities higher since our last Provincial Outlook. That appears to have already translated into production gains, hefty nominal export growth, and some sectoral investment activity. However, in the case of oil and gas, we do not anticipate a return to the peak levels attained before the last price correction given ongoing uncertainty about the transition towards clean energy sources.

Improvements in budget balances, still-supportive fiscal policy. To varying degrees, all provinces have embraced infrastructure spending as a means to bolster the economic recovery from COVID-19. Several have also reported better-than-expected budget balances in large part due to stronger-than-expected economic gains. Downward revisions to the outlook may alter the timing of future revenue gains, but early results put the provinces on firmer financial footing.

“K-shaped” recovery persists. “High-contact” sectors including tourism and accommodation and food services remain under pressure, while output from remote-capable services held steady even during the weaker-than-anticipated second quarter. The first group of sectors should eventually benefit from a release of pent-up demand, but labour shortages are present across Canada’s economy.

Slowing housing activity. The torrid and broad-based sales and price gains witnessed in the months after the peak lockdown period have given way to plunging purchase volumes and residential construction—though both variables remain historically elevated. The slowdown in residential investment is an established driver of the weak Canadian GDP flash estimate for July, and as such we incorporate early regional data in our H2-2021 provincial growth projections.

COVID-19. Canada’s high and broad-based vaccination rate minimizes the risk of severe fourth wave lockdowns, but there is clearly downside potential on this front at home and abroad given the recently observed spread of the Delta variant.

Quebec continues to top our 2021 provincial forecasts, largely due to growth already baked in. In Q3-2020, provincial output expanded by 59% (q/q ann.)—nearly 50% stronger than the national rate—which provided a very strong handoff for 2021. And while the Q2 StatsCan print has taught us that early data releases may be subject to change, there is little evidence at this time that La Belle Province’s GDP contracted in Q2. Most data points released for Quebec during that period—but especially those related to labour markets and household spending—continued to experience solid increases, likely a product of a relatively light third wave caseload and early reopening. Despite an apparent decline in by-industry GDP in May, Quebec GDP has been above its pre-pandemic level for the last three months (chart 2).

We assume Quebec growth below the national average for the rest of the year, in respect of its particularly sharp slowdown in housing activity so far in Q3 and expectations that supply chain issues will slow growth in its key manufacturing sector. However, infrastructure outlays should provide a partial offset—Budget 2021 planned increases of 10% this year and 19% next year—and the province recently reported a $2 bn improvement in its FY21 results, which leaves room for more support if needed.

Ontario is the source of a significant downward revision to GDP growth, and two primary factors underlie the changes. The first is its key automobile industry, where production guidance has been cut in response to the global shortage in semiconductors. That already seems to have impacted related exports—representing one-third of Ontario’s nominal shipments abroad—which fell by more than 20% y/y in each of the last two months and drove a significant national-level decline in Q2-2021. Gradual unwinding of this issue as the year progresses should create a strong handoff for next year, though effects are likely to persist well into 2022. The second factor behind the revision is the trajectory for residential investment which, like Quebec, has fallen off by more than the national average since late-Q2.

We see Alberta outpacing the national expansion in 2021 following a worst-in-Canada 8.2% contraction last year. Oil price increases have clearly lifted oil and gas sector activity over the course of this year, and last month anchored a nearly $11 bn improvement in projected budget balances for this fiscal year. Crude output has risen by more than 15% y/y in each of the last two months for which data are available, and the number of active drilling wells has surged so far in 2021, albeit from a very low level. The province’s export values have further benefited from price gains in forestry and agricultural products—also key trade commodities. Also positively, Alberta’s home sales, housing starts, and residential construction investment have thus far proved resilient to the downturn witnessed across most of the rest of the country.

Not all data points have been so sanguine. We expect Alberta investment to be more modest than could otherwise be anticipated in a year of 50%-plus crude price gains. That reflects lingering global uncertainty about fuel demand and the ongoing push to adopt clean energy sources. Labour market (chart 3) and retail and auto sales rebounds are also lagging, though H2 consumer outlays may get a boost from the easing of restrictions on July 1st, and a jump in Alberta wages and salaries in Q2.

British Columbia’s economy looks to be on strong footing relative to provincial peers. BC consistently ranks near the top of the provincial table in all the major monthly indicators we track, including a first place position on year-to-date total employment growth. Despite recent price normalization, softwood lumber continues to be in demand. Exports of nickel, zinc, and copper have also benefited from year-to-date price gains and should remain hot commodities as global green energy demand ramps up. Work on the LNG Canada liquefied natural gas export pipeline—while subject to timing uncertainty like any major project—should contribute to capital investment in the coming years. Tourism remains a risk, but may see improvements in the coming months as more data from the period of summer lockdown easing are released.

Saskatchewan is finally benefiting from a pickup in oil production after several months of lagging behind its western neighbour (chart 5). Potash output and shipments are also up, farmers are benefiting from strong canola and wheat prices, and the Cigar Lake uranium mine restarted in May. Also like Alberta, however, the province’s labour market and consumer spending appear to be lagging those of other provinces.

Manitoba is the only province where full-time employment is at pre-pandemic levels. Yet, its exports—though up over 10% y/y ytd as of July—are still being held back by softness in key pharmaceutical manufacturing trade, and this year’s drought presents significant downside risk for agri-food production and shipments.

In Atlantic Canada, immigration—which drove pre-pandemic expansions in all four provinces—remains below 2019 levels, but has gotten some support via the granting of permanent resident status to prior temporary permit holders (chart 6). Tourist activity may have recovered somewhat in the summer, with support from relatively low COVID-19 caseloads and the re-established Atlantic travel bubble. Regional base effects are less growth-inducing given relatively modest contractions last year.

Newfoundland and Labrador continues to grapple with the impact of the West White Rose project’s cancellation and the idled Terra Nova field that has weighed on crude production. However, production is set to restart at Terra Nova next year, and the province may have found a buyer for the Come By Chance refinery, which may ease its reliance on imports of upgraded petroleum products. An agreement in principle for federal government support for the Muskrat Falls hydroelectric project helps reduce downside risk to the province’s finances.

Prince Edward Island has had one of the softest employment recoveries of any province so far in 2021, but gains in wages and salaries and retail and auto sales suggest solid consumer spending to date. Exports are being held back by weakness in frozen foods—particularly to China and the US—and aerospace.

Nova Scotia’s economy looks to have bounced back somewhat from severe third wave lockdowns. With vaccination rates up and caseloads down, the province is in the fourth phase of its reopening plan. Looking ahead, further reopening is positive for continued recovery in high-contact sectors, while we see additional support for growth from planned infrastructure outlays and arctic offshore patrol ship construction.

New Brunswick benefited from hefty US fuel consumption and wood price advances in H1-2021, and led year-to-date provincial gains in nominal exports through July and manufacturing shipments through June. Those effects look likely to subside in H2, but further success with respect to COVID-19 containment and reopening should support more recovery in employment, which has lagged the other provinces. 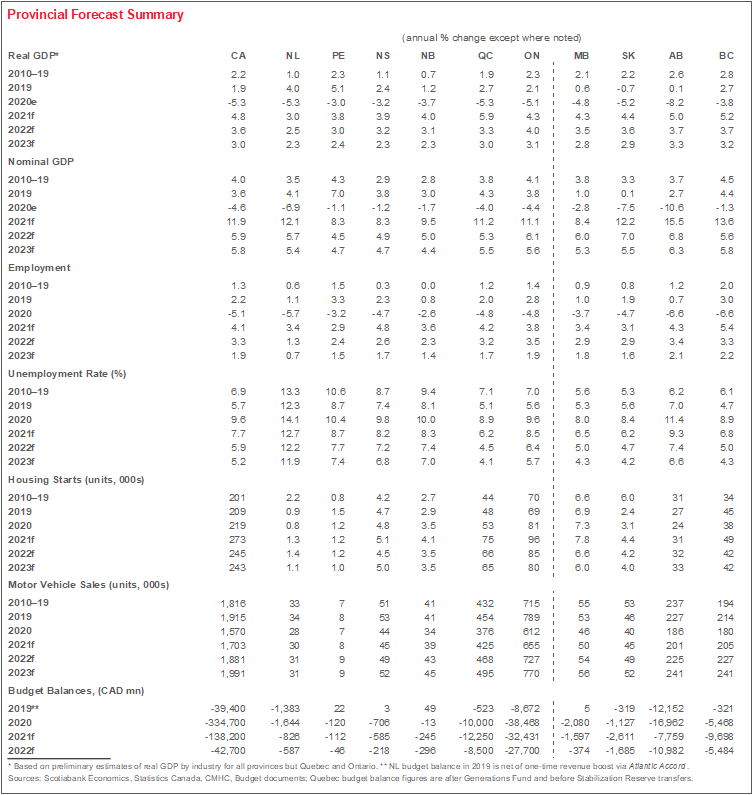