At the time of writing, Saskatchewan had the second-highest per-capita COVID-19 caseload of any province. We are encouraged by the downward trend in infection rates and rising pace of vaccination, though risks remain on this front.

Saskatchewan’s staple oil and gas industry has also gotten off to a somewhat soft start to the year. Crude production was down by 13.5% y/y ytd as of March 2021, though it did see a significant month-over-month improvement between February and March. While we expect output to rally as producers respond to stronger oil prices, the soft start should weigh on the annual growth rate—we assume a modest increase of about 3% this calendar year, in line with provincial government projections. Improving industry conditions to begin 2021 may have helped manufacturing and construction employment and hours, with robust homebuilding.

Yet the province’s other commodities still look set to contribute handsomely to the expansion this year. From January to April 2021, potash production was up over 11% versus the same period last year, and major producer Nutrien has revised H2-2021 potash output guidance by 500 kt, particularly at its Vanscoy mine. The Cigar Lake uranium mine restarted in April after two COVID-19-related work stoppages during the past year; output should ramp up more materially as we near 2022. Finally, prices for key crops wheat, canola, and soybeans are at multi-year highs—anchored by Chinese demand—and helped drive nominal Saskatchewan exports 15% higher than year-earlier levels as of April.

Eventual safe resumption of immigration flows is important for Saskatchewan just as in other provinces. For one, population outflows to other provinces had been steadily increasing before the pandemic, raising the need for an offset. As well, newcomers to Saskatchewan have historically had some of the highest employment rates among immigrants in Canada. Immigration to Saskatchewan has been helped by granting permanent resident status to workers already in the province, but overall admissions were still down 7% y/y ytd as of April 2021.

While Moody’s recently downgraded its rating of Saskatchewan’s debt from the vaunted AAA level, we still assess the province’s finances to be among the healthiest of any subnational jurisdiction in Canada. According to the latest government budget (read our take here), Saskatchewan’s net debt-to-GDP ratio is on track to be the lowest of any region through at least FY24. With low debt servicing costs relative to other provinces, this suggests debt levels are sustainable and leaves room for more fiscal policy intervention if needed. But more intervention may not be needed. Capital outlays across Crowns and government agencies are expected to rise by 12% and account for almost 4% of provincial output in FY22. Those figures are among the largest in Canada and should lend meaningful support to the recovery. 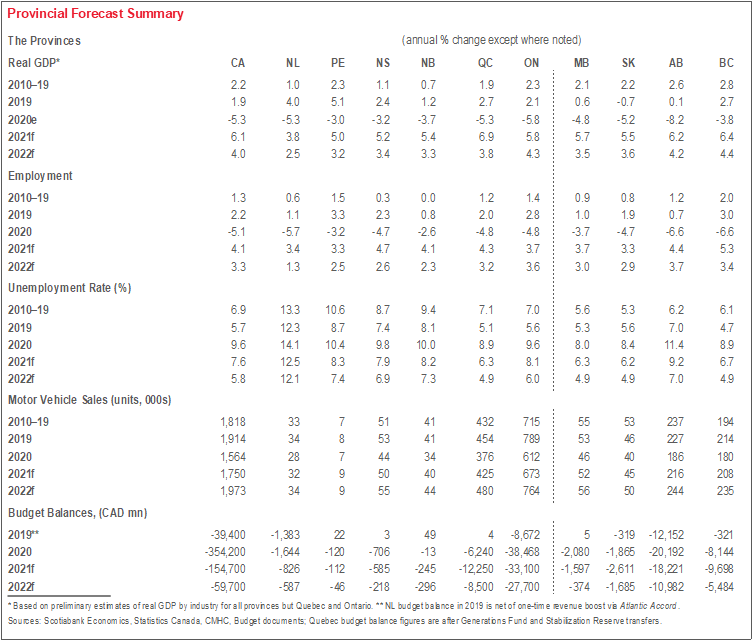