The economic recovery that is reflected in the projected path of real GDP (chart 1) and higher-frequency indicators of economic activity (chart 2) has raised employment and brightened prospects across the Latam region. But the pace of recovery, measured in year over year increases of monthly indicators, has slowed as base year effects wane. Mexico’s industrial production numbers for August, which increased 5.5% y/y as compared to 7.3% y/y in July, are the latest indication of that trend.

The rebound in economic activity has been accompanied by an unwelcome increase in inflation throughout the region and globally (chart 3).And while the steep rise in inflation is projected to be temporary, with price pressures abating to pre-pandemic levels over the near term, Latam central banks are grappling with the critical question of whether current inflation rates could prove to be more persistent (see Latam Weekly, October 8th). They are not waiting for a definitive answer to that question, however, as policy rates have been raised across the region (chart 4). In Chile, the BCCh surprised markets with a 125 bps increase on October 13th in the wake of September’s inflation report showing inflation rising by a blistering 1.2% m/m. With that increase, Chile’s real policy rate (adjusted for inflation) remains slightly negative, but far less so than only a few weeks ago. Real policy rates in Colombia and Peru remain further in negative territory; additional increases are needed to rebalance monetary conditions in the face of inflationary pressures. In this respect, they are joined by central banks around the globe (chart 5). Further increases by Latam central banks are coming, as Latam central banks move proactively to contain inflation consistent with their price stability commitments.

The prospect of less favourable external financial conditions is also a consideration in central bank decisions. And with the Fed signalling a tapering of bond purchases, and unexpected rate hikes a possible risk, the region’s central bankers must weigh the spillover effects of Fed and other advanced economy central bank policy actions. In addition to high inflation, fiscal imbalances (chart 6) and general government debt burdens (chart 7) are key sources of vulnerability to foreign financial shocks. External debt (chart 8), current account balances (chart 9), and reserves (chart 10) are other vulnerabilities. None of these indicators are signalling imminent alarm, but all warrant monitoring.

Exchange rate depreciation fuelling higher domestic inflation via pass-through effects is a further constraint with which central banks must contend. Regional currencies have depreciated since the start of the year (chart 3), animating such concerns. For the most part, Latam currencies have been broadly stable in recent weeks. The Peruvian PEN is the exception.

The currency suffered a pronounced depreciation leading up to and in the weeks following the presidential election as investors reacted to pervasive political uncertainty (chart 5). However, President Castillo’s recent manoeuvring to strike a moderate tone, including changes to critical cabinet posts, has led to a strong rally. That re-pricing effect spilled over to the equity market (chart 4), paring some of the earlier losses, and sovereign bonds (chart 6).

Elsewhere in the region, markets were relatively quiet in recent weeks, though equity markets in Chile have retreated in October as much higher inflation presaged an acceleration of monetary tightening. Meanwhile, 10-year CDS spreads on sovereign bonds has gradually widened in Brazil, Colombia, and Peru over the year; more recently, the spread on Chile’s bonds has ticked higher. In contrast, the spread on Mexican bonds has been stable.

Sovereign bond yield curves across the Latam region (charts 1–12) have incorporated higher expected inflation and short-term rates. Curves have generally shifted up across the maturity spectrum since earlier in the year. Argentina’s curve, which has become progressively more inverted, is an exception (chart 1). Mexico’s M-Bono curve is another exception: it has remained firmly anchored at the long end of the curve since the beginning of the year (chart 9).

Key pandemic indicators are provided in charts 1–12. The decline in trend in new daily cases since the summer (chart 7) is encouraging. So too is the progress made towards vaccinating the population (chart 10) and the decline in test positivity rates (chart 12). 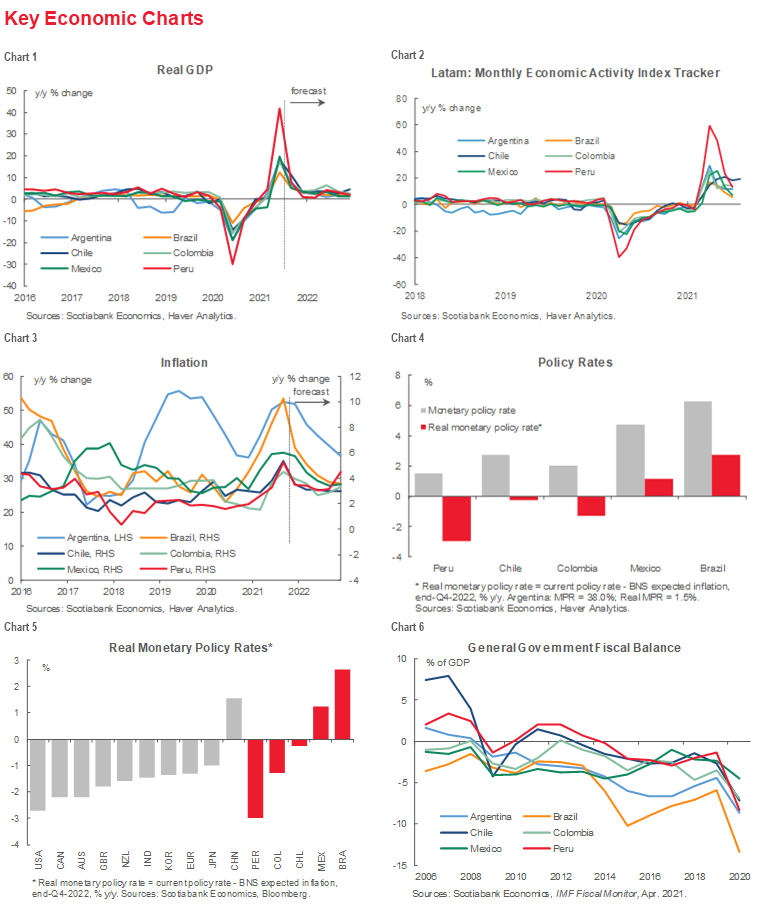 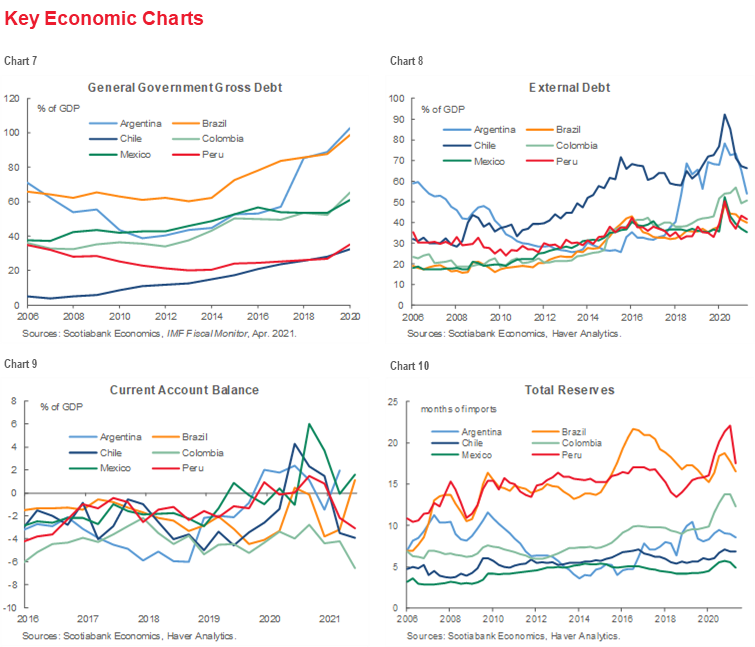 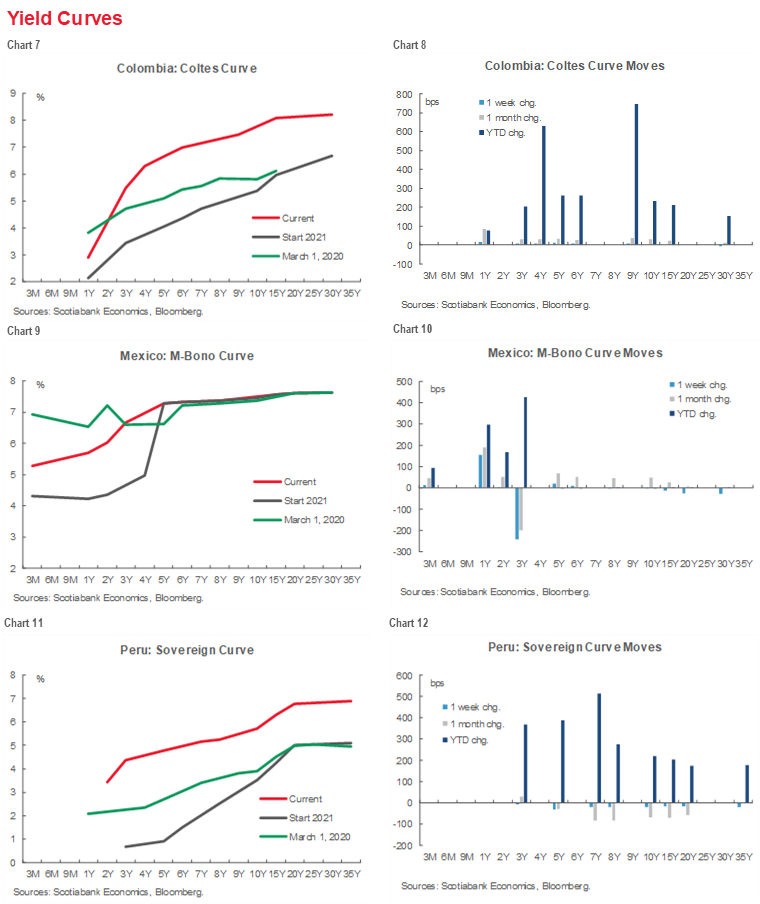 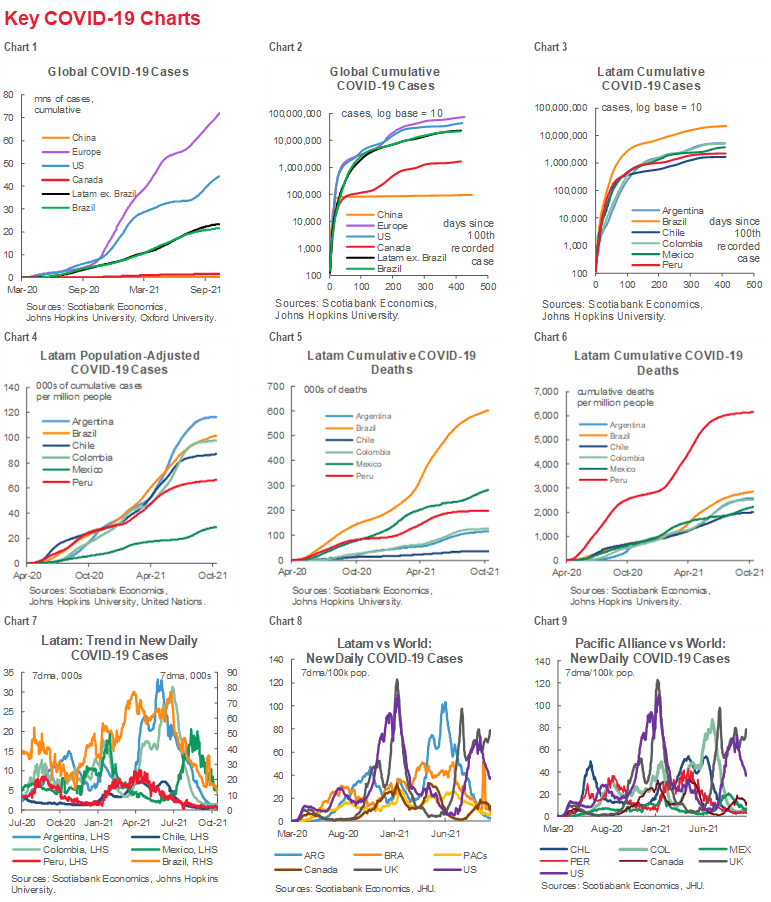 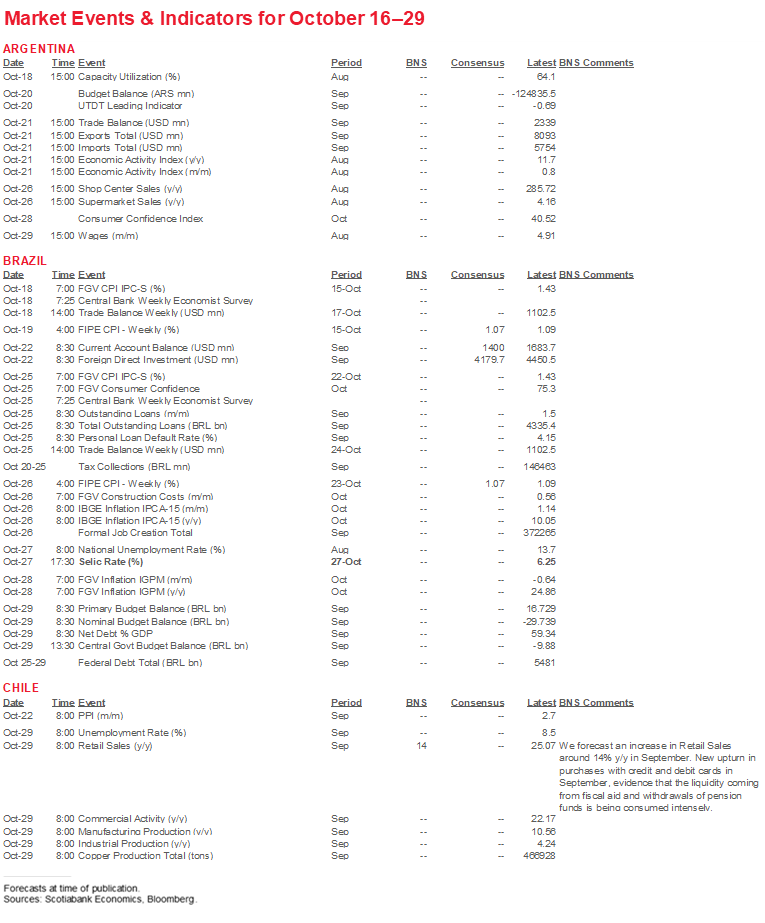 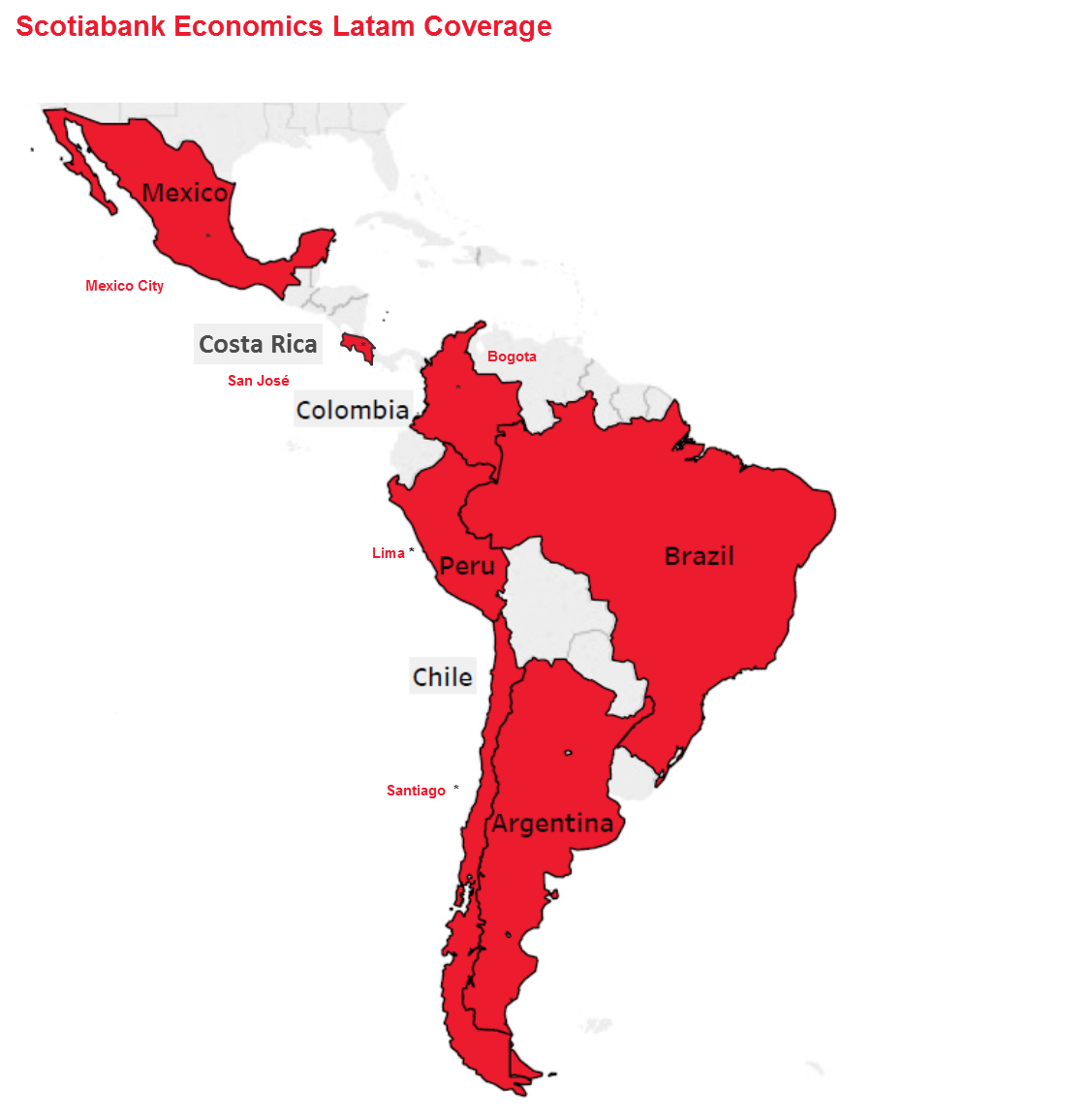 Latam Charts: Now It Gets Interesting