Canadian home sales rose by 0.2% (sa m/m) in December, while listings declined by 3.2% (sa m/m), reversing all of November’s improvement. This larger decline in listings retightened the sales-to-new listings ratio, an indicator of how tight the market is, bringing it back up to 79.7% after falling to 77% in November—significantly higher than its long-term average of 54.5%. As a result of these historically tight market conditions, the composite MLS Home Price Index (HPI) rose by another 2.5% (sa m/m), only slightly slower than its November pace. Single family homes and townhouses anchored December’s price gain, rising by 2.6% and 2.5% (sa m/m), while apartments rose by 2.1% (sa m/m).

Movements in the market were less broad-based in December, with sales gains in parts of the country somewhat offsetting declines elsewhere. Within the 31 local markets we track, there was a fairly even split between markets where sales increased and those where they decreased. Changes in sales ranged from a 16% (sa m/m) decline in Saskatoon, to an 8.3% (sa m/m) increase in Calgary. Note that the largest declines in December occurred in regions that recorded the largest gains in the previous month (Saskatoon, Regina, PEI, and Okanagan-Mainline). Despite what looks like a small monthly increase, the sales volumes remain at a record high. As has been the case throughout the second half of 2021, the national level of sales is the second highest on record for December after December 2020, and a remarkable 40% (sa) higher than the 2000–2019 December-average.

The decline in listings was more broad-based than the increase in sales. Of our 31 markets, listings went down in 21. Of the 10 markets where listings increased, sales went up in 6—indicative of the tight supply conditions limiting sales activity relative to demand. Despite the retightening in the national sales-to-new listings ratio, the number of our local centres in sellers’ market territory fell to 21 from 25 in November. Months of inventory continued to decline, falling to 1.6 months in December—the lowest ever on record, far below their long-term average of 5 months. Months of inventory were at record lows in British Columbia, Ontario, Quebec, New Brunswick, and Nova Scotia.

All home types contributed to this month’s price gains, with single-family homes being the main driver. One-storey single-family homes were the only segment to experience an acceleration in price gains in December, while two-story homes, townhomes, and apartments all saw their price gains decelerate, although only slightly. On the whole, the composite MLS HPI for all homes in Canada was 26.6% (nsa y/y) higher in December 2021 compared to the same month last year—the largest year-over-year increase on record.

The Canadian housing market wrapped up 2021 pretty much as expected. With or without December, the level of sales in 2021 had already surpassed 2020’s by October, breaking an all-time record. Compared to 2020, itself a wild year for the housing market, 2021 saw sales increase by 20%, while listings went up by only 9%, resulting in a 21% increase in prices.

Market movements and motivations in December were reflective of those of previous months. Generally speaking, sales were relatively flat in December compared to November, but they were already at levels unseen before in the housing market during the winter months—sales in the fourth quarter of 2021 were 61% higher than the 1988–2019 Q4 average, and second only to the fourth quarter of 2020. The strength was again motivated by improved labour market outcomes, acceleration in immigration, and demand from investors. The level of employment in December had surpassed pre-pandemic levels—albeit the industry distribution of those added jobs looked different than it did before the pandemic. Immigration data lag a month, but the number of admissions in November surpassed the record set in October, which itself surpassed the record set in September…you get the idea. December will likely be another strong month as the federal government makes the final push to meet its 2021 target. As of November, they were at 90%. Investor demand is also strong, and at least partly driven by strong immigration—prime source of rental demand.

The increasingly expected rate hikes this year may have also contributed to this busier-than-usual winter housing market. Persistent inflationary pressures have pushed the Bank of Canada to take on a more hawkish tone and markets are now pricing in six rate hikes in 2022. With buyers on the margins already priced out, the rush to lock in lower rates is likely concentrated within the rate-sensitive investor market segment. A new dataset from the Bank of Canada offers new insights into the makeup of mortgaged homebuyers. While the data is only available up until June of 2021, it points to an influx of investors to the market. Compared to the same time last year, home purchases by investors were 99% higher, compared to 66% by repeat-home buyers and around 47% by first-time home buyers. This is a divergence from historical trends, where home purchases across the different groups generally moved in tandem. The share of first-time home buyers in the market has subsequently fallen to its lowest level since 2015, while that of repeat-home buyers and investors increased to their highest level since 2015.

The erosion in affordability in recent years naturally pushes more buyers into the rental market, in which investors play a critical role, providing essential rental supply. The share of investors reported by the Bank of Canada captures units that are bought and flipped for a profit—however, the Bank reports that in recent years, homes bought and resold within six months have accounted for only 1% of transactions, while those flipped within 12 months have accounted for 2%. Therefore, to the extent that units purchased are not kept vacant, the increase in investor activity will support the increase in rental demand, which is important in a market that faces shortages in both market segments, owned and rented.

When the expected rate hikes come into effect, they will similarly have an outsized impact on investors’ demand in the opposite direction to the pre-hike rush we’re seeing today. That’s because investors are typically more sensitive to expectations of higher borrowing costs and lower profitability. With a larger share of investors in the buyers’ pool, rate increases may result in a disproportionate fall in demand, alleviating some of the pressure in the market. Of course, the flip side is higher payments for existing mortgage holders. Luckily, however, the rates at which these borrowers had to qualify were well above current and likely future market rates.

The 0.2% increase in December’s sales was almost certainly limited by the lack of available listings, which registered a big decline. December is generally a weaker month for listings, as people want to focus on enjoying the holidays rather than keep their homes open for viewings, but the 3.2% decline is already adjusted for this seasonal trend. This speaks to the increased tightness in the market relative to earlier years, which continues to push prices upward by larger magnitudes than the increase in sales. We expect new inventories to be almost immediately picked up by buyers, so stay tuned for what is likely to be yet another busy spring market. 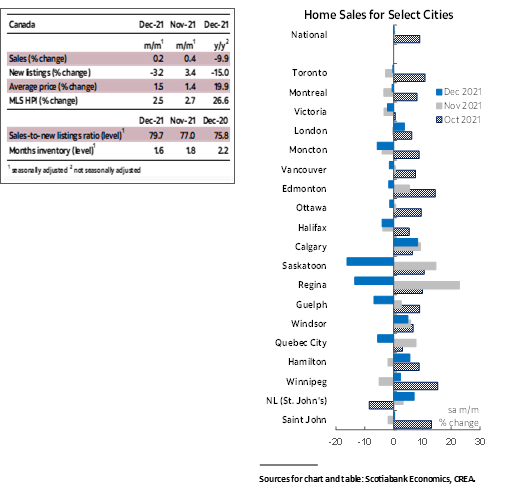 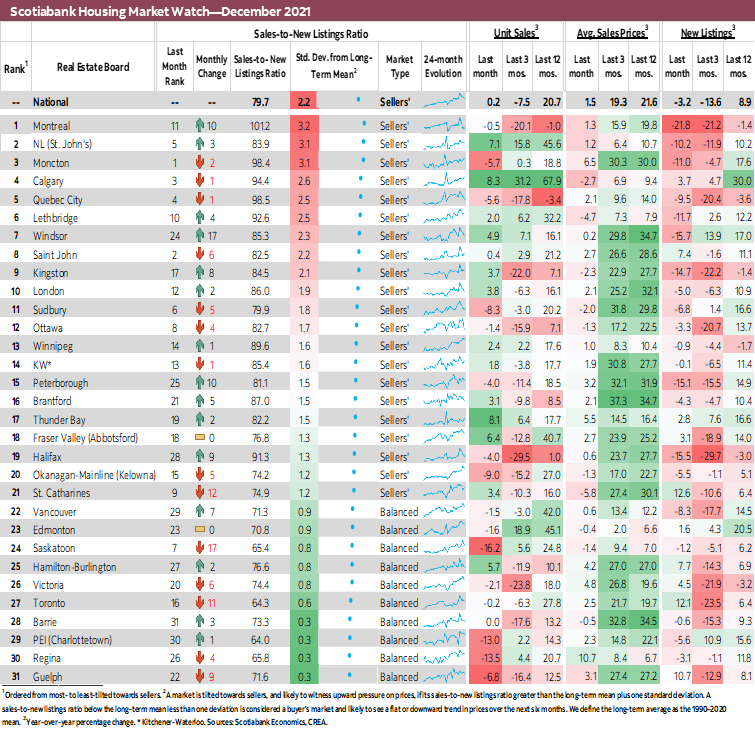 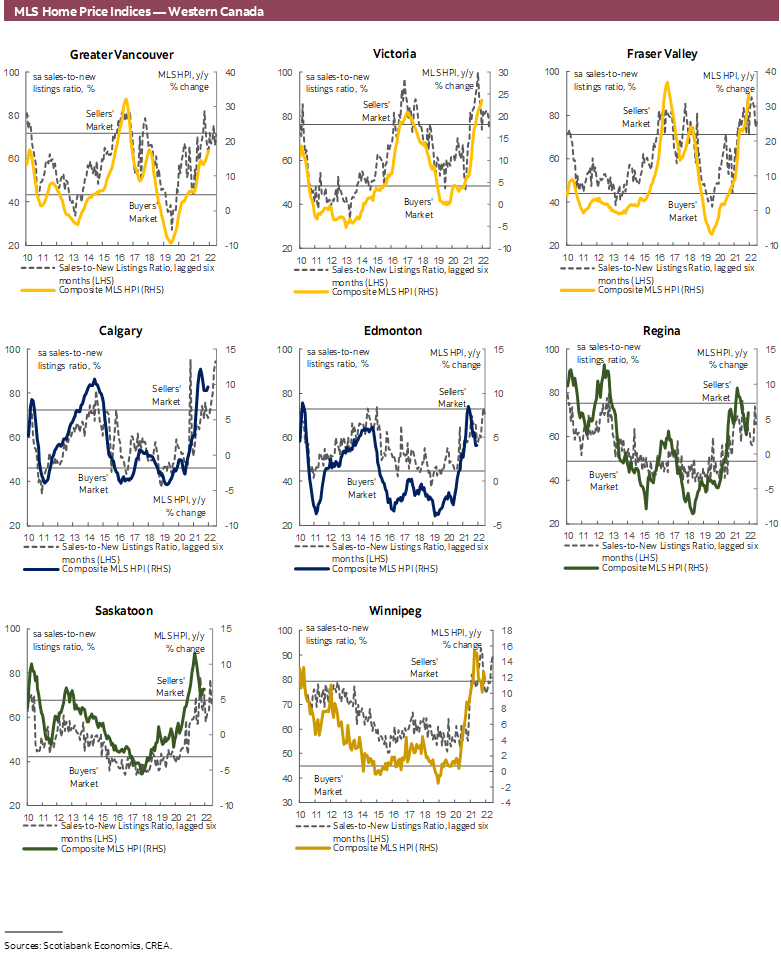 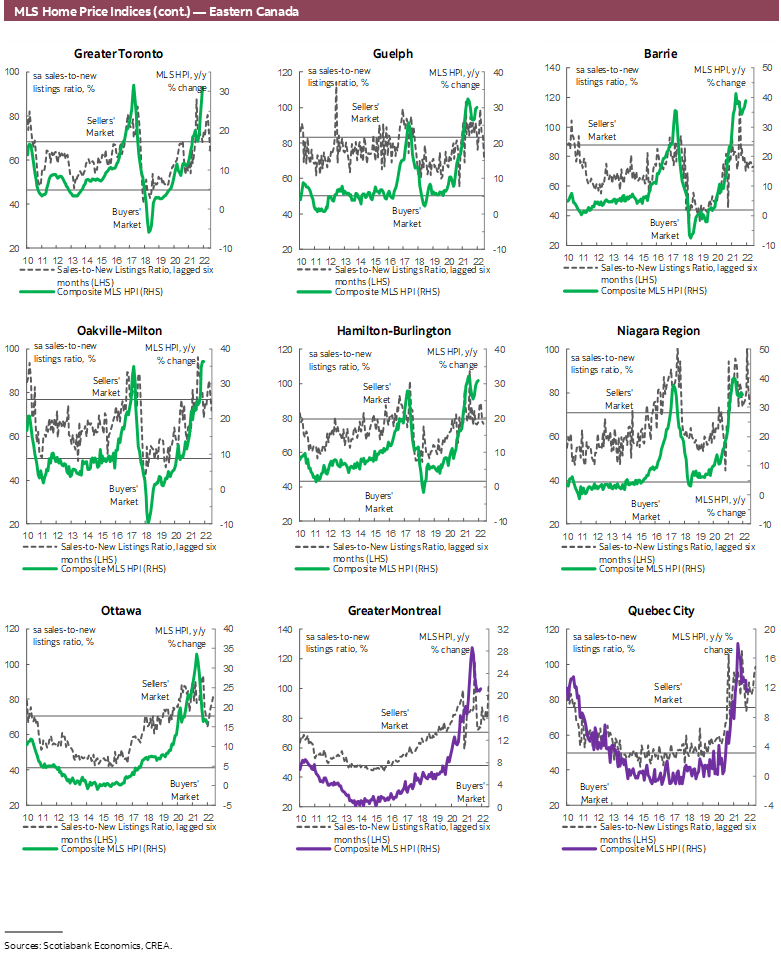