Canadian home sales declined by 3.5% (sa m/m) in July, the fourth, albeit smallest, decline in a row. Listings declined by a whopping 8.8% (sa m/m), the fourth and largest decline in a row. After lagging behind sales in the month of June, listings fell by more than double the decline in sales in July, causing the national-level sales-to-new listings to reverse almost all of its June easing and inch back up to 74%—further from its long-term average of 54.5%. As a result of this persistent tightness in the housing market, the composite MLS Home Price Index (HPI) rose by 0.6% (sa m/m)—continuing its trend of steadily decelerating after recording the biggest monthly price gains since 2000 in February and March of this year. Single-family homes were again the main driver of the price-gain deceleration in July.

On a national level, declines in sales were less broad-based than in previous months. Of the 31 local markets we monitor, however, sales declined in 25 of them in July compared to June. Winnipeg led the increase witnessed in the remaining 6 markets, where sales went up by 9.4% (sa m/m). As in previous months, it’s important to remember that July’s level of sales are historically strong—the second highest on record for July after July 2020, and 26% (sa) higher than the 2000–2019 July-average.

Listings caught up with sales in July, re-tightening the market after a June reprieve. Listings declined in 25 of our markets, led by markets in the GTA, Vancouver, and Montreal. This decline in sales pushed the number of centres in sellers’ market territory to 17. Interestingly, of the 6 markets that saw an increase in listings in July, Winnipeg’s rise was the largest. It also had the largest sales increase in July, with the listings likely immediately absorbed. Declining inventories in Ontario, British Columbia, Quebec, New Brunswick, Nova Scotia and Newfoundland & Labrador in July were roughly offset by improvements in months of inventory in other provinces. As a result, months of inventory held steady in July at 2.3 months—an improvement from their lowest level on record in March 2021 of 1.7 months, but still quite lower than their long-term average of 5 months.

Single-family homes are again leading the deceleration in price gains, after a short-lived reversal in June where apartments and townhouses experienced the largest deceleration. The growth in composite MLS HPI for all homes in Canada eased to 22.2% (nsa y/y) in July 2021—down from the biggest year-over-year increase on record in June—and to 0.6% (sa m/m)—the smallest monthly increase since May 2020. The largest monthly HPI increase in July was in the townhouse segment (0.8% sa m/m), followed by apartments (0.6% sa m/m), and single-family homes (0.5% sa m/m).

Canadian housing sales continued to cool down in July, as expected for the summer season. Keep in mind that any declines are relative to an all-time record-high level of activity set in March 2021—therefore, after four consecutive months of slowing down, the housing market activity continues to be quite strong relative to historical standards. In fact, the level of sales in July 2021 is the second highest level ever witnessed for the month of July, after July 2020. Listings fell by more than double the decline in sales in July, again tightening the supply-demand balance after a brief improvement in June.

The market is likely responding to multiple factors underpinning the slowdown. First, the housing market in Canada is traditionally slower in the summer compared to spring, a trend that was likely brought forward with March 2021 being the peak. Second, OSFI’s new stress test, which came into effect on June 1st is another factor, but the extent of the effectiveness of this tighter measure is unclear, as it likely only impacted buyers on the margin who have already been priced out of the market. Third, as the global recovery from the COVID pandemic pushes forward, buyers may be adjusting plans to account for higher expected borrowing costs. We expect the Bank of Canada to raise rates twice next year starting July 2022, and while the increases are likely to be gradual and well-communicated, at today’s higher prices and mortgages, gradual increases over the term of the mortgage will translate to larger monthly payments, and buyers may be, correctly, pricing that in into their future affordability calculations. Erosion in affordability, bidding wars fatigue, and a reversal of pandemic-spurred preferences for more space as we shift our focus toward enjoying a double-vaccinated summer and traveling, are among the other possible explanations to the market’s recent slowdown.

This, however, is likely to be a very short-lived reprieve, as activity is expected to pick up again come labour day weekend, and the fundamental supply shortages underlying the market imbalances have not yet been addressed. In fact, despite the slowdown, the persistent tightness in the market continued to push the MLS Home Price Index (HPI) upward, albeit at a slower pace compared to previous months, with the more spacious single-family homes leading the deceleration in price gains.

Overall, July’s slowing housing market does not come as a surprise, since the factors that triggered the pandemic rally are dissipating as expected, while affordability has been largely weakened and immigration remains on hold. A reversal of this retreat in the Fall should not come as a surprise either, as we expect improving labour market conditions and a resumption in immigration to drive demand upward alongside the usual pick-up in activity after the labour weekend as the new school year begins. Policy makers should pay less attention to what could be a short-lived respite, and more attention to the long-term structural supply challenges which will continue to create imbalances in the housing market and likely push prices upward as domestic and global conditions simultaneously improve. 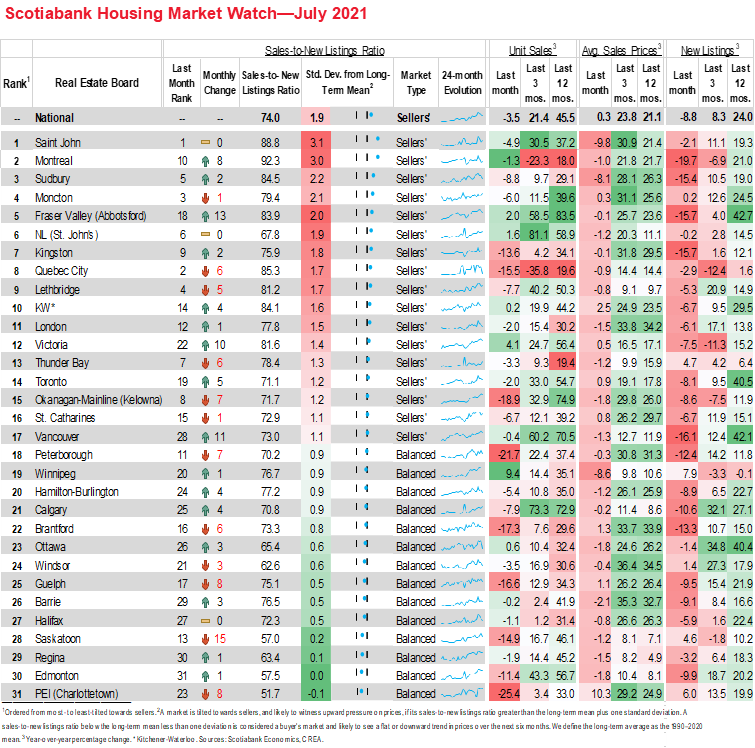 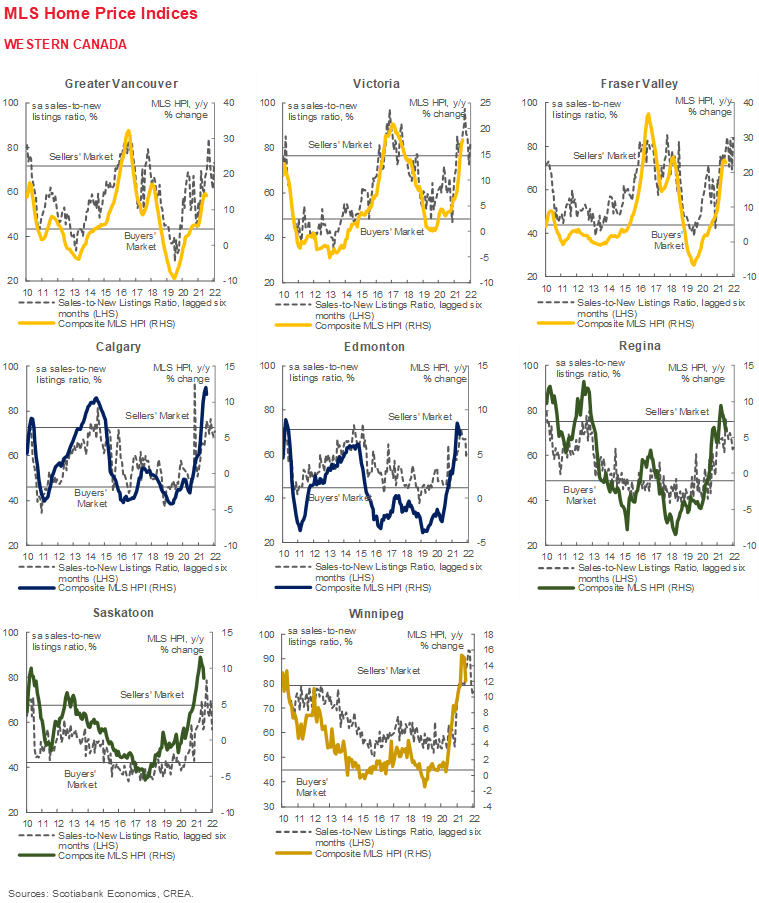