US INFLATION—HOW TO OVERCOMPLICATE SOMETHING

US CPI inflation arrives on Wednesday. A rise to 5.8% y/y (from 5.4% previously) seems likely and with prices up by 0.5% m/m on a seasonally adjusted basis. Core CPI is expected to rise to 4.3% y/y from 4% with prices ex-food-and-energy higher by 0.4% m/m. There is likely more upside risk than downside risk to these estimates. If the estimates are close to reality, then headline year-over-year inflation will surpass the prior peak in 2008 before lagging effects of the pandemic dragged it downward and will hit the highest rate since late 1990. Core inflation would hit the highest rate since the end of 1991.

It almost seems that we’ve all been overcomplicating the inflation forecasting business during the pandemic. Endless debate over Philips curves, reopening effects, closing effects, supply chain pressures, idiosyncratic influences, energy drivers, etc. can all be replaced by one simple chart. Chart 1 that is. Ebbs and flows in recent month-over-month rates of inflation—both headline and core—are highly correlated with ebbs and flows in COVID-19 cases. The chart plots inflation the normal way but inverts the axis for COVID-19 cases in order to show the connection in the clearest possible way.

Since we’re back on the downswing for new cases, inflation is back on an upswing from the weakest point in August when Delta variant cases were raging. The continued decline in cases should mean that October’s price gains continue to accelerate after the up-tick in September.

Across other CPI drivers, base effects alone would lead to no change in headline year-over-year CPI, but core CPI would tick down to 3.9% from 4%. Seasonality would add a small amount to headline and core prices in October. Gasoline should add another small amount in weighted terms given the 3.8% weight on a 3½% m/m increase in all-grades gasoline prices. Price signals from readings such as the ISM-services measure also reinforce expectations for the resumption of inflationary pressures.

Apart from pandemic swings, there are two other main drivers of uncertainty around inflation forecasts. One is when spare capacity shuts. Having recovered all GDP lost due to the pandemic by about now, the US economy is expected to move into material excess demand over the coming quarters which should be the next leg of inflationary pressures (chart 2).

Second, wage pressures are highly evident. Unit labour costs—productivity adjusted compensation including wages and benefits—have undergone a definite slope shift toward faster rates of increase during the pandemic than before the pandemic (chart 3). They are up by a cumulative 7 ½% since the end of 2019 which means labour costs have been rising much faster than output and productivity on a trend basis. If this persists then it would be a source of inflationary pressure in ways that counter Chair Powell’s assertion that wage gains have been supported by productivity. The surge in the Employment Cost Index (chart 4) and average hourly wages from the household survey (chart 5) generally reinforce the fact that wage pressures are rising in the US economy. If so, then that makes the wage-price spiral argument an increasingly credible argument against transitory inflationary pressures.

That, in turn, is likely to raise the risks to applying further fiscal stimulus if only to set the Fed up to neutralize it. Senator Manchin’s concerns about inflation are unlikely to be diminished after Wednesday’s CPI figures.

What is passing through to consumers is more important. Headline CPI has been running at just 0.7% y/y with core inflation at 1.2% y/y. Inflation is far below the state’s 3% inflation target and has been for years (chart 7). At issue is the credibility of the PBOC’s inflation target and why it is not embracing easier monetary policy. A common narrative is that China does not wish to repeat the imbalances that resulted from previously excessive stimulus coming out of the Global Financial Crisis and that Chinese authorities view policy stimulus abroad as having gone haywire. Both are fair points.

Except that perhaps the pendulum has swung too far. China’s economy is faced with a growing list of downside risks while monetary policy is setting among the world’s highest inflation-adjusted policy rates (chart 8). China’s Covid Zero approach to shutting down schools and venues at the mere whiff of a case—and despite a high vaccination rate and very low per capita cases (chart 9)—is causing a reassessment of momentum in earnings and broad near-term growth. China, it seems, remains so scarred by its initial outbreak that it has not transitioned away from a lockdown mentality toward approaches being taken in other high-vaccination countries that are relying upon alternative policies. Given China’s early experiences in the pandemic, however, it’s pretty hard to fault the country for being cautious.

Nevertheless, add Covid Zero to the country’s energy shock, ongoing risks in property finance (and not just Evergrande) and supply chain woes. Reserves continue to be stockpiled and have modestly risen during the pandemic to US$3.2 trillion. Avoiding past policy mistakes risks triggering another in the opposite direction. In all, there is an underlying market narrative that posits that heading to the exits may be premature for DM central banks such as the Fed that I don’t subscribe to, but nobody is talking about whether China’s central planners are committing policy error through an overly tight policy stance that jeopardizes ‘common prosperity’ goals. It also begs the question about what China has done for world growth lately.

A pair of hikes and a hold wouldn’t serve you well in a game of poker but is a fair characterization of expectations for a trio of regional central bank meetings next week. Major global central banks are unlikely to have much further to offer after recent policy decisions over the past couple of weeks.

As individual cities continue to release home sales figures leading up to the nationwide totals for October on November 15th, they’ll continue to inform a debate over how housing markets will hold up to a rise in rate pressures in addition to how our forecasts for higher market rates will impact mortgage funding costs at financial institutions. Some say the housing market cannot withstand the effects of our rate hike forecasts and what financial markets have priced in without suffering a correction.

Let me first start by saying in response to the doomsters that you’re going to have to do better. For nearly three decades, I’ve been hearing about the imminent collapse of Canada’s housing markets and I’m still waiting.

Every threat needs to be evaluated, however, so it’s worth reviewing some of the evidence. Overall, there is ample padding in measures of household finances to take rate hikes. Our growth forecasts anticipate a mild drag effect from housing, as the whole point to tightened monetary policy is to cool interest sensitives. Our forecasts nevertheless assume a rotation of the sources of growth more toward exports and investment plus the 70% of the economy that’s in services. Monetary policy has to target broad conditions in the economy and not just one sector.

The following points work against a more alarmist housing perspective.

OTHER MACRO—DIAMONDS IN THE ROUGH

The rest of the week’s line-up is short on potentially jaw-dropping moments for global markets but contains a few gems.

The dominant focus for US observers will be upon the possibility we hear an announcement on appointments to the Federal Reserve given reports that Chair Powell and Governor Brainard have held meetings with President Biden. Fed-speak will also focus upon Vice Chair Clarida’s remarks on monetary policy prospects on Monday, low risk around two appearances by Chair Powell at a diversity conference, and several other Fed speakers. Discord within the Democrats toward plans to offer additional fiscal stimulus will also be monitored. Apart from CPI (noted above), the rest of the release schedule will be light and only includes UofM consumer sentiment on Friday, producer prices on Tuesday, weekly claims on Thursday and the JOLTS job vacancy measures on Friday. The US Treasury market will be shut on Thursday, but stock markets will remain open.

While CPI will capture most of the attention regarding China, exports during October arrive this weekend and are expected to post cooler growth partly on COVID-19 restrictions and supply chain problems. We might get financing figures for October this week (if not, then the following week).

Australian employment figures for October will be updated on Wednesday night (ET). The Aussie labour market is poised to regain a small portion (consensus +50k) of the -284k jobs lost over the months of August and September. Lockdowns and restrictions eased throughout October, which should lead to a more material gain in November employment. It is still early, but market participants will be on watch for how recapturing of jobs and participation rates move the unemployment rate, which could subsequently lead to upward wage pressures in the near-term. Chart 18.

Canadian bond markets will be shut for Remembrance Day on Thursday while equities will remain open. BoC Governor Macklem delivers another Sunday interview on CTV at 11amET and then speaks on Tuesday, but only to deliver closing remarks at a diversity forum. The BoC releases its Survey of Senior Loan Officer Opinions on Friday, but it rarely captures market attention. There are no material macroeconomic releases on tap, but 75 TSX-listed firms will release earnings.

Limited European releases will focus upon German exports (Tuesday) and the ZEW investor confidence measure (Tuesday) which kicks off the main survey-based evidence on the economy’s performance during November that subsequently reveals readings for PMIs and IFO business confidence. The UK also updates exports, its services index and industrial output on Thursday. 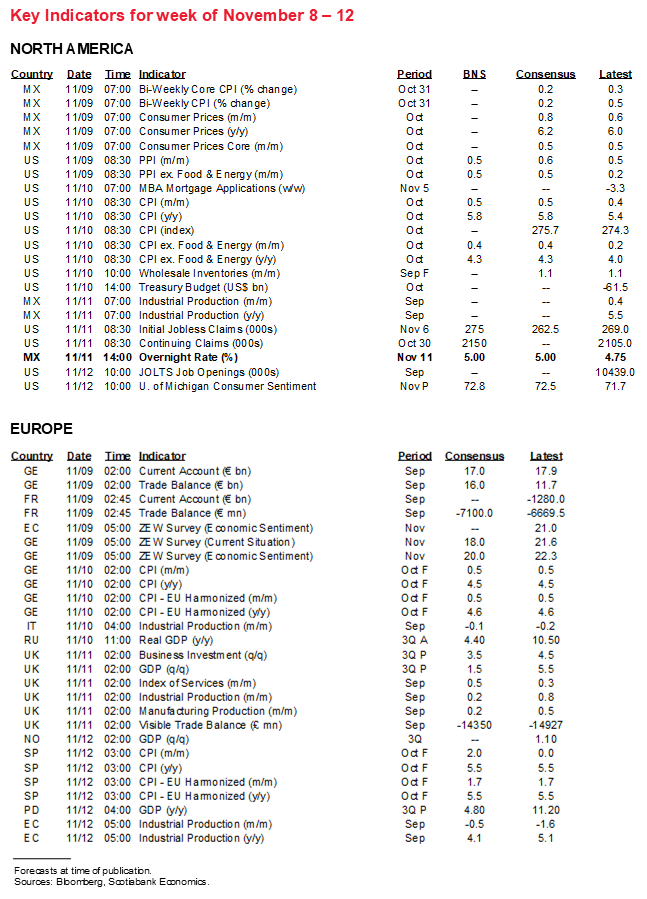 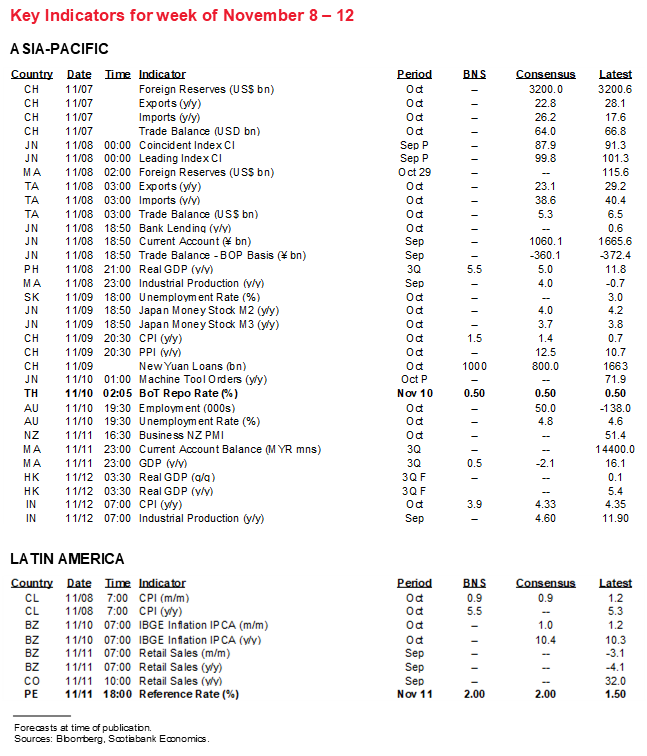 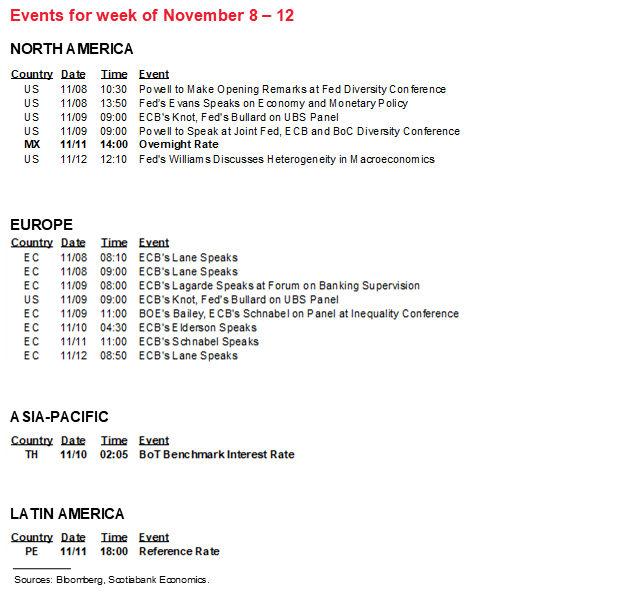 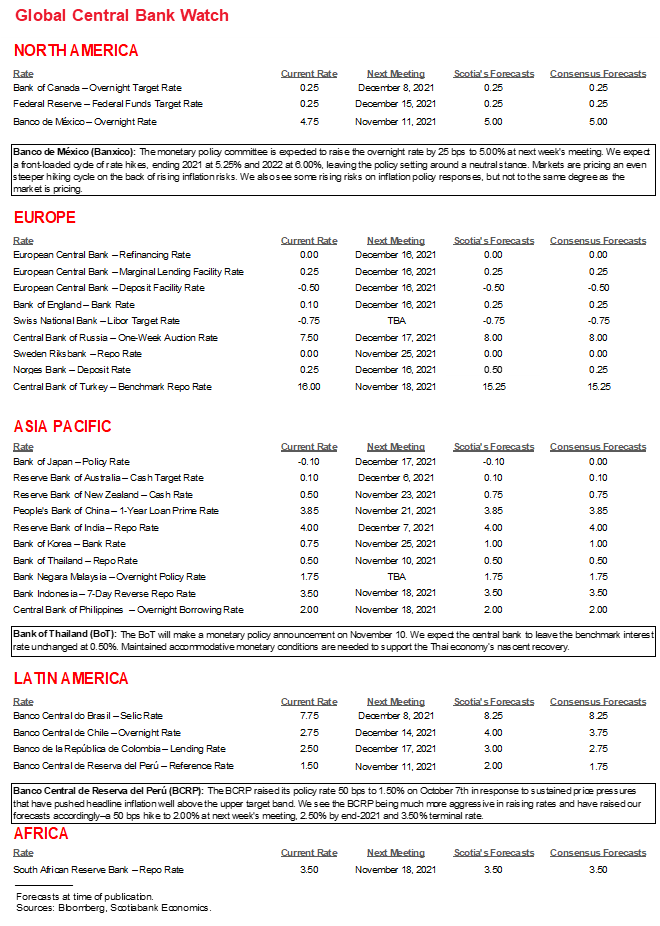 The Global Week Ahead: Can the Fed Steepen the Curve?

The Global Week Ahead: Another Cautious Christmas

The Global Week Ahead: Monepalooza!