FRESHENED GUIDANCE FROM THE FEDERAL RESERVE

Markets will be on close watch for fresh indications of whether key Federal Reserve officials are leaning toward lift-off as soon as the March FOMC meeting, updated perspectives on reinvestment plans, and how new information since the last meeting (recapped here) may have affected current thinking around the outlook for the economy and the Fed’s dual mandate objectives.

Federal Reserve Chair Powell’s confirmation hearing will be held on Tuesday at 10amET before the Senate Banking Committee. There is high potential for fresh policy guidance being delivered during his testimony that will start with brief written remarks and then plunge into grilling on the full range of issues including monetary policy, diversity at the Fed, and more politicized angles. You can watch it live here. In terms of content, anything is fair game which was also the case at Powell’s confirmation hearing on November 28th 2017 when he was nominated to his first term as Chair. During that testimony, for instance, Powell strengthened the odds of a hike at the December meeting, though the Fed was already in the midst of a tightening campaign.

Governor Brainard’s confirmation hearing before the Senate Banking Committee will be held two days later at the same time and may be a bumpier ride than what is expected to be given by way of bipartisan support for Powell. Brainard will be grilled on the same issues as Powell but a wedge issue between Brainard and Powell could emerge in the form of slightly different stances toward deregulation to date and future potential policy measures that could be of relevance to policy matters affecting the financial system such as capital and liquidity management. For whatever it’s worth (perhaps not much!) the PredictIt crowd places high odds on a squeaker of an outcome (or failure) when Brainard’s nomination subsequently goes to a vote before the full Senate (chart 1).

A key issue is the extent to which developments since the FOMC meeting on December 14th – 15th may have affected their thinking. On that note:

The Fed’s preferred PCE inflation readings increased to 5.7% y/y (headline) and 4.7% y/y in terms of core with the latter exceeding expectations. The next CPI estimates arrive on Wednesday and hence after Powell’s testimony but before Brainard’s.

Wage growth was strong in December and the unemployment rate fell back to its lowest since before the pandemic (recap here). Watch for further strengthening of remarks around how close the Fed thinks it is to maximum employment.

Most of the macro readings since the December meeting are nevertheless lacking freshness given the speed at which omicron cases have been piling up. There have been about 8½ million new cases of COVID-19 reported since the December FOMC meeting concluded. Since this is very likely an underestimation of the actual number and because omicron is thought to result in generally milder outcomes for most people, we also need to look at hospitalizations and deaths. Chart 2 shows the changes in both; hospitalizations are rapidly moving toward the prior pandemic peak. I would expect Powell to be careful and somewhat circumspect in his remarks, but to err on the side of medium-term optimism in terms of how the US emerges from this wave.

Other Fed speakers will include a heavy line-up of regional Presidents (Barkin, Bostic, Bullard, Evans, George, Mester, Williams). It’s unclear whether to expect nominations for three remaining vacancies including Vice Chair of regs and two Governors despite guidance that announcements will “soon” be made; the Biden Administration is likely to have enough on its hands watching how the hearings go and the tone of support.

US CPI for December lands on Wednesday at 8:30amET. It therefore arrives after Chair Powell’s confirmation hearing on Tuesday, but before Governor Brainard’s on Thursday. Powell’s army of Fed economists will give him a pretty good idea of what to expect and Brainard will have the numbers in hand that are expected to continue to run rather hot and provoke additional grilling.

The readings might, however, give us a stale perspective on near-term inflation risk. The general pattern to date has been such that when COVID-19 cases are rising, inflation tends to ebb, and vice versa as shown in chart 3. Since cases are exploding now, this rough relationship could give rise to significant nearer-term downside pressure on inflation while pushing forward a renewed surge when cases eventually subside. A challenge to this relationship, however, is that the supply side is tighter and the US economy has closed spare capacity.

In terms of drivers for the December reading, one source of uncertainty is that there will be two forms of methodological updates in this release and the next one. CPI spending weights will be updated and based on consumer expenditure data from 2019–2020 instead of 2017–18. Current weights are shown in chart 4 for the biggest items, but a fuller breakdown is available here. This is likely to dampen contributions from high-contact services and raise relative contributions from categories like housing and several categories of goods. Unlike Canada that updated CPI weights this past summer based on 2020 spending, the BLS is using spending patterns from both 2019 and 2020 and hence is mixing pre-pandemic and a part of pandemic-era patterns. The next month’s release for January CPI will then involve updating seasonal adjustment factors for price movements in 2021 with potential revisions stretching back over the past five years.

Year-ago base effects could push inflation a touch lower if nothing else were to change. December is usually a light month for seasonal price pressures. Gasoline prices fell in seasonally unadjusted terms, but seasonal adjustments are likely to result in a mild positive contribution to the overall month-over-month change in CPI. Natural gas prices fell sharply from late November through December and even at a modest weight on utility gas service of 0.82% this should be a significant drag effect on headline CPI of around -0.1–0.2% m/m (chart 5). New vehicle prices were up by about 3–4% which at a 3.9% weight should add 0.1–0.2% to overall CPI as another rise in used vehicle prices should add up to 0.1% to CPI. Watch for greater housing contributions through owners’ equivalent rent. As usual, the dominant swing factor is focused upon estimating idiosyncratic and pandemic-related effects.

The rest of the week’s global line-up of calendar-based risks will be relatively light. That probably means that beyond Fed communications and US inflation, global markets will be more sensitive toward off-calendar risk such as monitoring omicron developments and perhaps geopolitical factors.

Other US developments will focus upon a handful of releases. Retail sales face downside risk (-0.1% m/m) because we know that vehicle sales volumes fell last month with a partial offset from higher prices. Gasoline prices also fell and the later month decline in mobility readings could weight on gasoline volumes. The Fed’s Beige Book of regional conditions (Wednesday), producer prices for December (Thursday), industrial output during December (Friday) and the University of Michigan’s consumer sentiment figure (Friday) round out the line-up. If any of that matters, it might be updates to consumers’ inflation expectations (chart 6).

Various countries will update inflation readings. At the top of the list outside of the US will be China’s figures on Tuesday night (eastern time). Headline inflation is likely to fall back below 2% y/y and hence well beneath the 3% policy goal (chart 7), while core inflation remains stuck at just over 1% y/y. The PBOC is expected to update the one-year Medium-Term Lending Facility Rate sometime by next weekend; even though the Loan Prime Rate is the official policy tool, tweaks to other rates can signal intent and policymakers have slowly been acknowledging mounting downside risks to China’s economy through a variety of channels. China might also update financing figures this week and trade figures for December arrive toward the end of the week.

Canada will be dead quiet with nothing of consequence on tap this week.

The lone central bank on the agenda will be the Bank of Korea. Consensus is almost universally expecting another quarter point hike to a 7-day repo rate of 1.25%. Inflation landed at 3.7% y/y in December for the highest reading in 10 years (chart 8). On December 16th, Governor Lee Ju-yeol indicated that another rate hike was being considered in Q1 which would mean either this meeting or the one in February.

The UK will consider modest and stale updates including industrial output, services activity and trade—all for November pre-omicron. 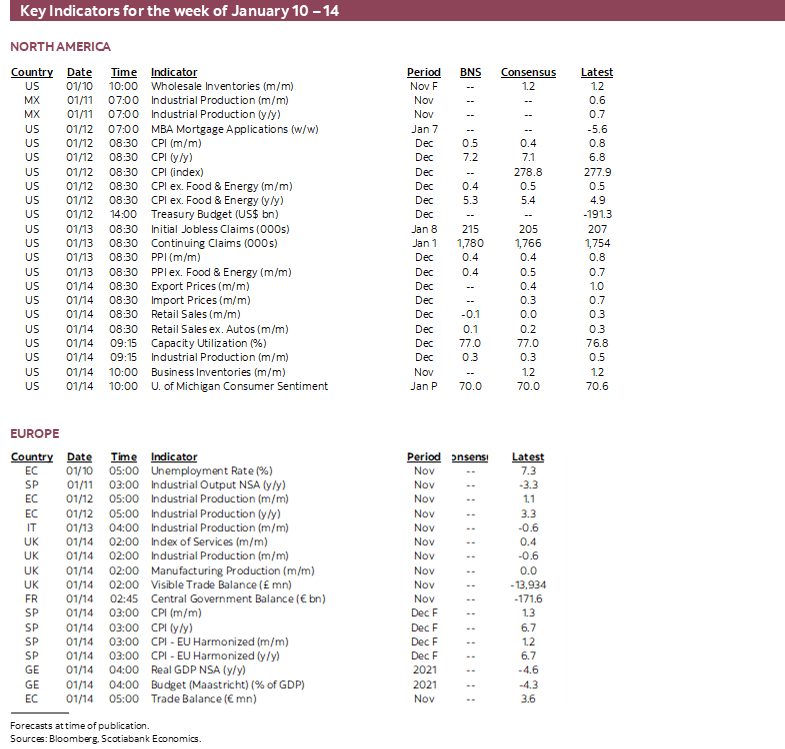 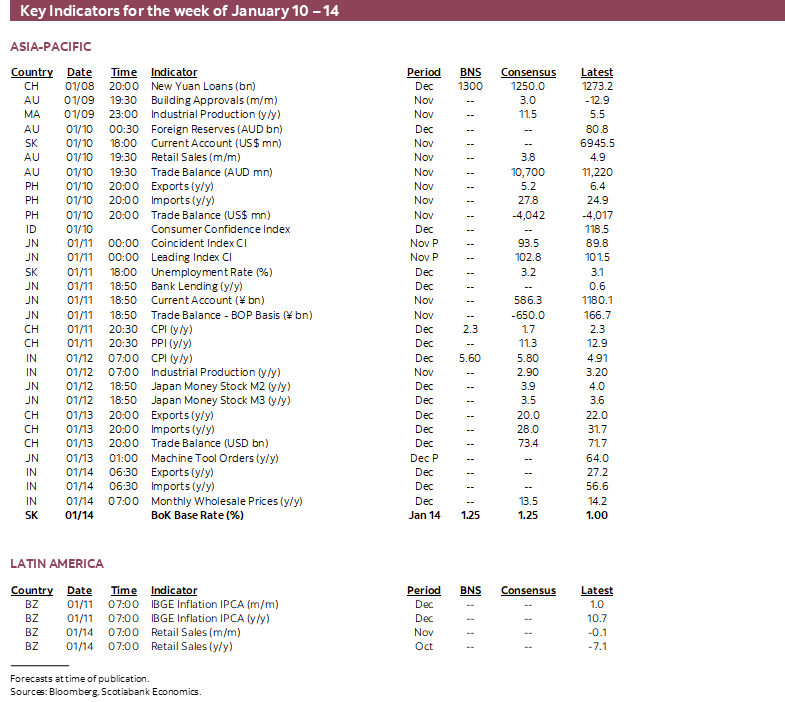 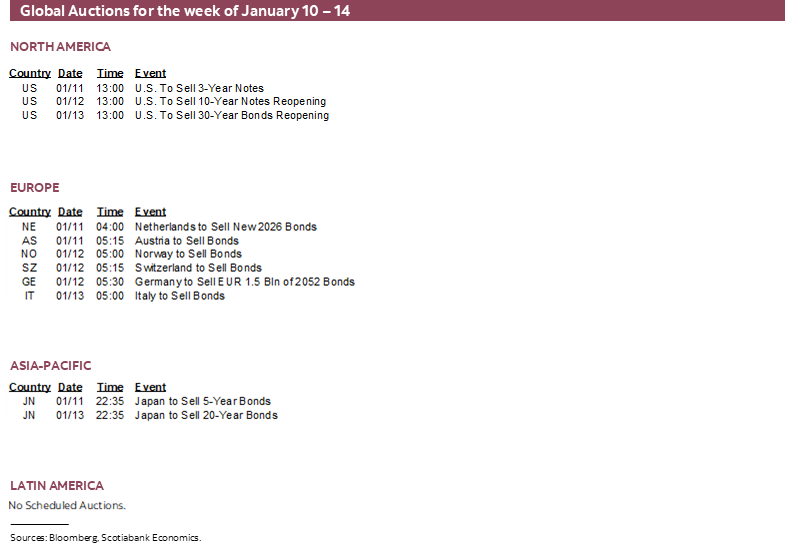 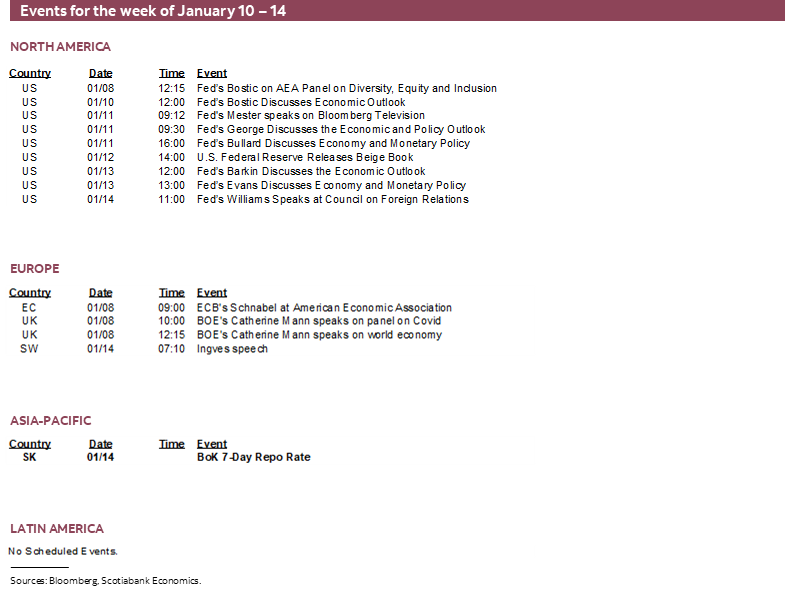 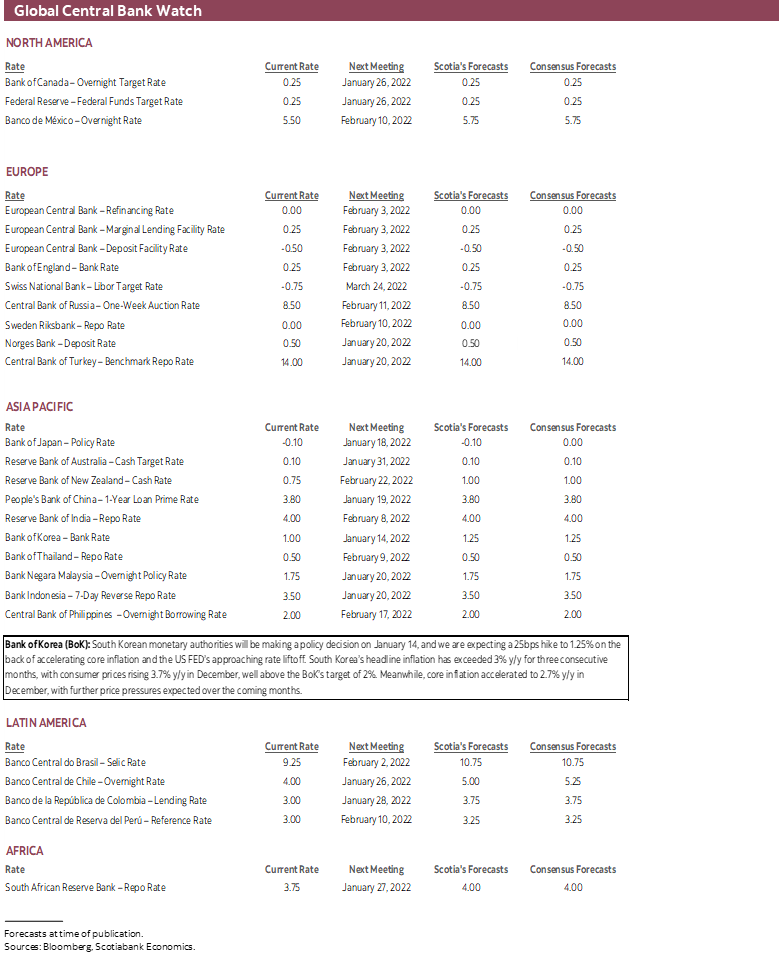 The Global Week Ahead: The Other Balance Sheets

The Global Week Ahead: Temporary Relief From Polarizing Institutions

The Global Week Ahead: The Great Services Rotation

The Global Week Ahead: The Acceptance Stage