US inflation ebbed last month but likely due to transitory factors that counsel looking through the downside miss to core inflation. The Delta variant’s impact on travel and lodging plus autos drove all of the miss.

Key is the month-ago core CPI rate that ebbed to an annualized month-ago rate of just 1.2% (chart 1). That cuts through base effect drivers to look at price pressures at the margin. Well that’s clearly it, inflation’s over, nothing to see from here! Not. Over-reacting to one downside miss makes about as much sense as over-reacting to upside hits as the trend is expected to remain well above the Fed’s price stability goals. It’s the smoothed month-ago pressures over time—and not just a few months or even quarters—that will determine the outcome of the transitory debate. I strongly think the Delta variant is creating noise around higher frequency activity and price signals but that underlying pressures toward solid growth and supply chain pressures should motivate trend inflation a lot higher than we saw last month in monthly-annualized core terms.

This is the second consecutive deceleration in the year-ago rate of core inflation from a peak of 4.5% y/y in June to 4.0% now (chart 2).

Markets did not look very closely at the drivers in my view as the US 10 year yield plunged by about 7bps after the release and the dollar fell but has since recaptured most of that initial weakness. I think the curve response has at least as much to do with position squaring on expectations toward another upside surprise as it has to do with the actual report’s new information.

What will Chair Powell do about it next week when the FOMC meets? He might say it’s tentative evidence of how earlier price pressures were transitory but I would expect him to say it’s highly premature to reach such conclusions. If he instead pumps the ‘transitory’ narrative then he’ll be a bit too quick with the pom-poms. Further, he already said that the FOMC believes it has achieved its price stability goal and so the focus remains upon continued shortfalls in full employment goals after we just got a negative payrolls surprise. I would expect him to be guarded given the Delta variant, the need for a funding and debt ceiling agreement and mixed data and to repeat that tapering later in the year is likely without providing firm hints next week.

So what drove it? Chart 3 shows the month-over-month changes in prices by component and chart 4 does the same in weighted contribution terms. Charts 5 and 6 do the same things for the year-over-year rates of price changes. Since we knew the base effects going in, I won’t focus on the year-over-year rates in the rest of what follows and will instead focus upon the drivers of the month-ago downside miss. 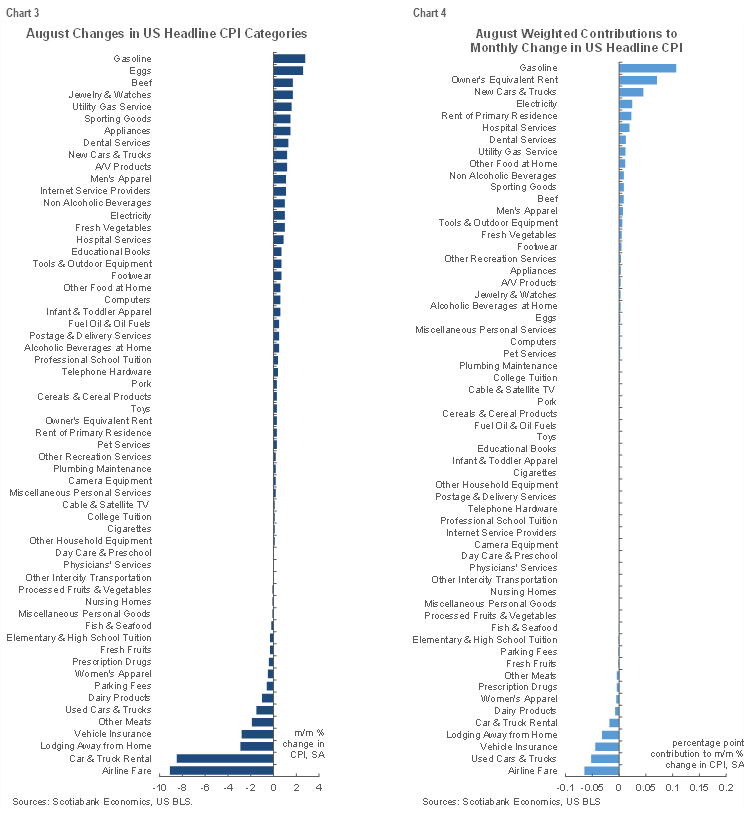 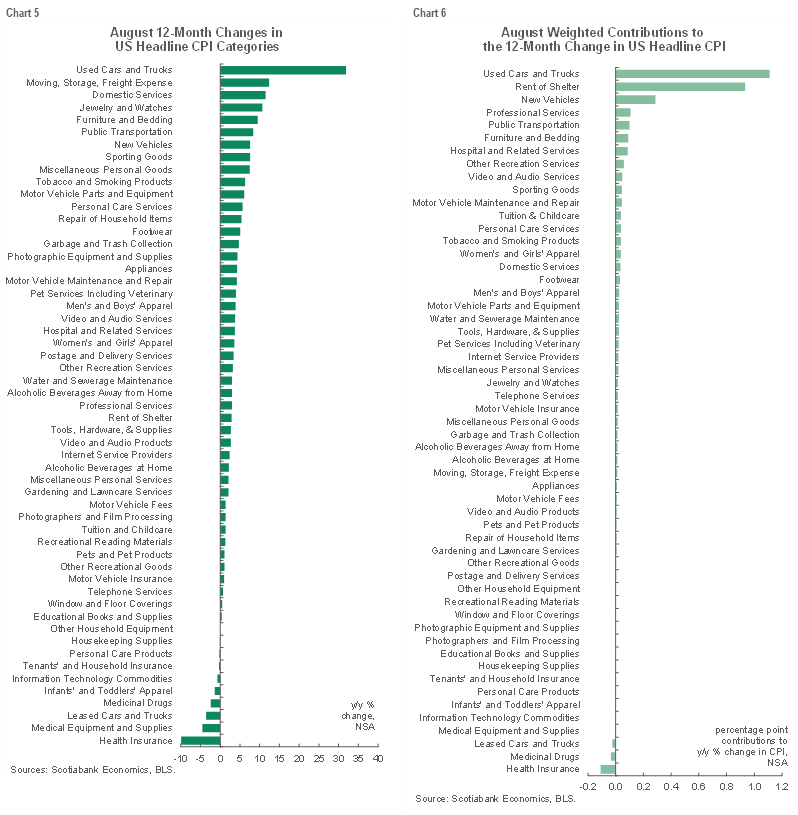 The Delta variant and the shortage of automobiles for sale knocked two-tenths off of core CPI m/m.

The main downsides that were likely attributable to the Delta variant’s impact upon travel came through airfare (chart 7), car rentals and lodging away from home. They cumulatively knocked 1.5 basis points off the m/m core inflation rate in August. Then we probably also need to control for a slower pace of increase in the food away from home category that increased at its slowest pace in three months and half the pace of the two prior months.

Add autos and Delta together and on a weighted basis they account for about two-tenths of the downside miss on core CPI and hence all of it.

There were other drivers of secondary note. We can split them into components that are coming off earlier surges that were likely transitory and components that are probably temporarily soft. Chart 10 shows the split between core goods and core services price inflation to demonstrate how both categories softened.

Chart 11 shows that we’re probably not even close to seeing the end of rising house prices influencing owners’ equivalent rent which saw another 0.3% m/m rise for the fourth straight month that translates into a strong monthly annualized gain. 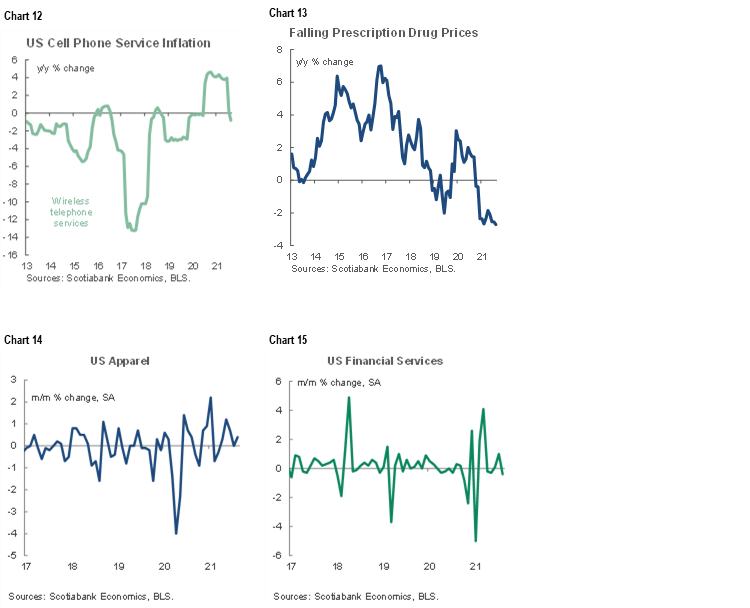 Medical care inflation continues to ebb in year-over-year terms as we’re still basing to last year’s surge in the early stages of the pandemic but I think this ebbing is transitory (chart 16). Frankly, who wouldn’t be amazed if medical care inflation over the decades suddenly disappeared but that's something to be evaluated over time and into 2022 at a minimum.

Last, ‘food at home’ (ie: groceries) and ‘food away from home’ (ie: take-out etc) continue to drive upside pressure but both did so at a softer month-ago rate last month. Both categories were up by about 0.4% m/m and hence half the rate of the prior couple of months. Chart 17.

See the appendix for a detailed table showing monthly and yearly rates of price changes, weights and z-scores to show the deviations between the latest inflation rates by component and the averages over 5 and 10 year periods scaled by standard deviations in order to show the magnitudes of the deviations. 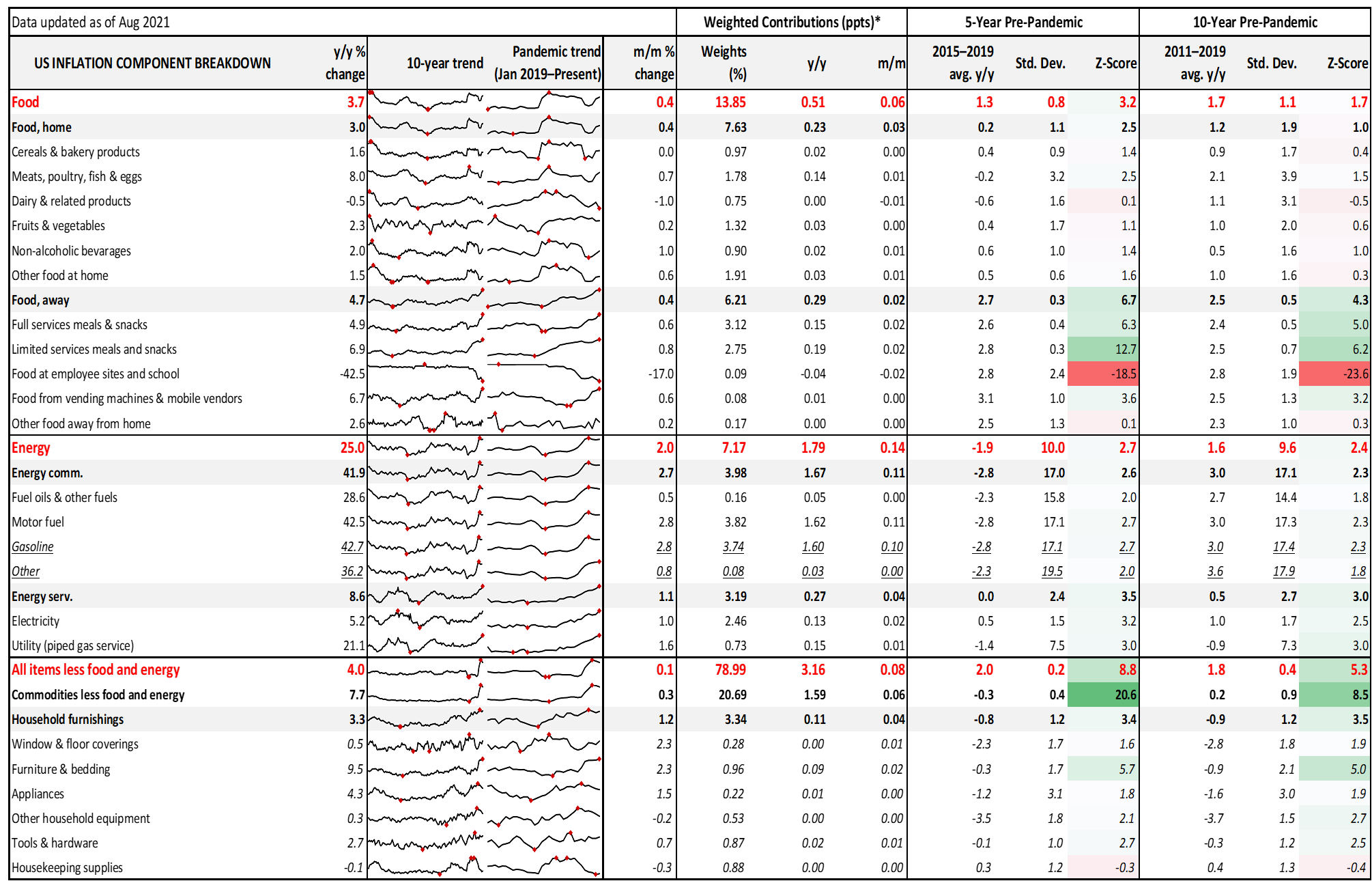 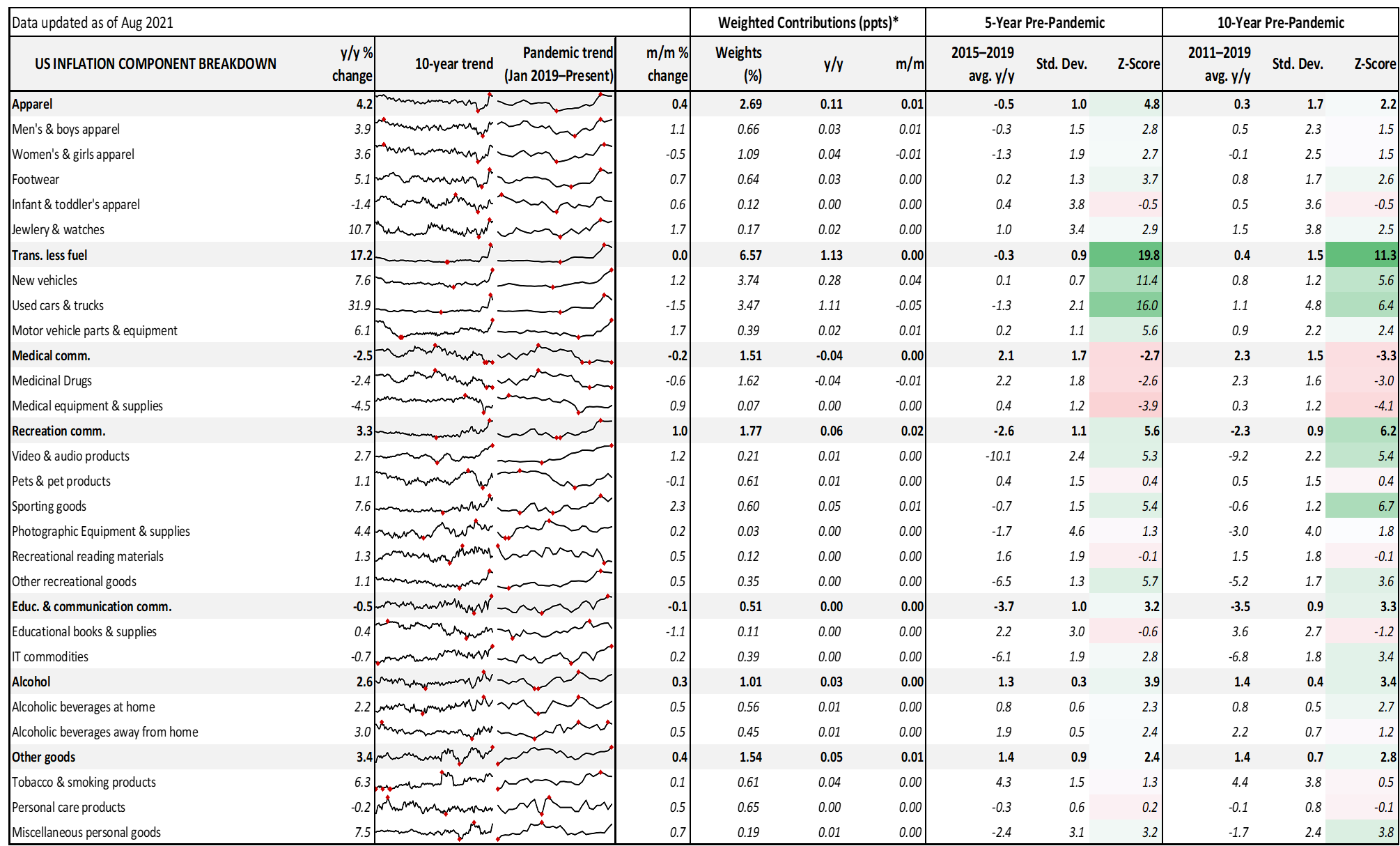 Is Fed Funds Pricing Going Too Far After Above-Consensus Inflation?

Nonfarm Was Just Barely Good Enough For The Federal Reserve

Canadian Jobs Pressure The Bank of Canada to Catch Up