US inflation soared last month no matter how you look at it. Every measure exceeded every economist’s expectations including my own, but loosely met guidance that the risk was toward higher than estimated readings. This may, however, be a top for the year-over-year rates as only another very powerful gain next month would keep the year-over-year CPI rate unchanged instead of slipping. We’re still likely to get a prolonged period of elevated month-over-month annualized readings for an extended period which remains the best way to monitor inflation risk.

The December FOMC meeting is likely to see the dot plot pull forward the first hike into 2022. While the FOMC has pre-committed to the taper path in December, inflation and nonfarm readings like we’ve received may also indicate a bias on the committee toward expediting tapering over 2022H1 at the same meeting.

Because of such expectations, US Treasury yields spiked after the release including an 8 bps gain in the two-year yield on the day and a 4bps move in 10s as the curve bear flattened.

Headline inflation hit the highest since November 1990 and was just one-tenth shy of that mark. Core inflation tied with August 1991.

Chart 1 shows the year-over-year rates of core price inflation and how the Fed’s preferred core PCE reading is likely to follow to well over 4% y/y on November 24th (likely ~4.2% y/y).

Chart 2 shows the m/m seasonally adjusted and annualized rates of headline and core CPI to distinguish from year-over-year effects.

Chart 3 shows that the connection between the ebbs and flows in COVID-19 cases and inflation remained intact; the decline in cases fed activity that propelled prices higher last month. See the Global Week Ahead and accompanying chart deck for how we can’t just leave inflation drivers at that, as the US economy is on the verge of heading into excess aggregate demand alongside sharply rising wage pressures.

Breadth was very high. When it’s your home(s), vehicle(s) and food that are all contributing toward higher prices, then it’s pretty dang clear that this isn’t just a series of distortions and one-off effects. Central bankers—perhaps especially Chair Powell—–have seriously misjudged the breadth and durability of inflation. We’ll soon see who (Powell or Brainard) gave the most compelling arguments in their interviews with President Biden.

Chart 4 shows the breakdown in terms of core goods and services price inflation. Core goods inflation accelerated the most with a services assist.

Chart 5 shows the month-over-month unweighted changes in seasonally adjusted prices by component and chart 6 shows the weighted contributions. Charts 7 and 8 do likewise for the year-over-year drivers. 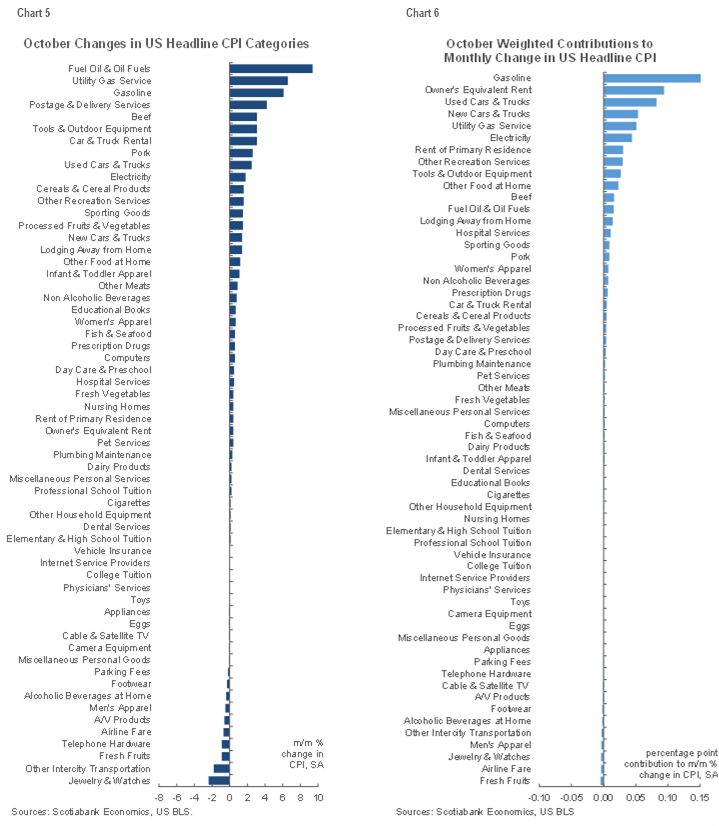 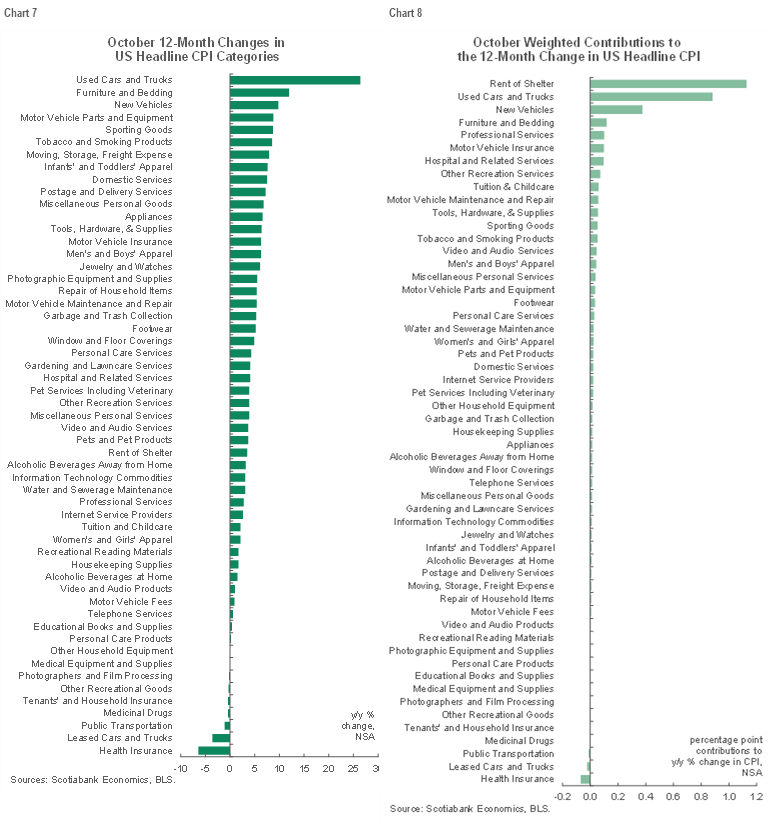 In general, high breadth was showcased by a mixture of reopening/Delta variant effects and more durable ones like OER and rent. Across the drivers, food at home prices were up +1% m/m , food away from home (take-out etc) was up +0.8%, new vehicles were up 1.4% m/m , used vehicles 2.5%, medical care joined the party up 0.6% for commodities and 0.5% for services, shelter was up 0.5% for the strongest gain since June, electricity prices were up 1.8% etc etc. Only apparel was soft at 0% m/m following the prior month's -1.1% so budgets shifted to everything else as Delta cases subsided.

In y/y terms, it was homes and autos that were far and away the biggest drivers. Rent of shelter adding almost 1.2 ppts to headline, used vehicles adding >3/4 ppts, new vehicles almost 0.4. Put another way, the only things dragging y/y down are health insurance (which I still think is transitory), leased cars and trucks and public transportation by a whisker (which includes airfare).

As for social distancing components, the evidence was somewhat mixed last month:

The electricity grid issues over the months have seen strong gains of between 0.8% m/m – now 1.8% m/m, but even the latest gain only adds 0.04 ppts to headline CPI so it wasn't a material factor.

Ditto for piped gas prices that were up 6.6% m/m SA, but the small weight only had it adding 5 one-hundredths to headline CPI in m/m terms which made it a tiny influence.

That may well be the peak in y/y terms. In order to maintain the y/y headline and core readings, we'd need another month of 0.7–0.8% m/m gains in December which is not impossible, but is improbable. Elevated year-ago readings will persist into 2022 but begin to dissipate, but the month-over-month annualized readings will be the ones to watch. Again, see the Global Week Ahead for the arguments around the next leg of US inflationary pressures beyond pandemic and supply chain influences.

Shortly after the release, Senator Manchin tweeted that inflation is not transitory, is getting worse and that “DC can no longer ignore” the inflation tax. That likely means his support won’t be there for further fiscal stimulus.

Please also see the accompanying collection of charts for individual inflation drivers as well as the dashboard of inflation drivers and deviations from cycle norms with thanks to Marc Ercolao for his help. Regular publishing will resume on Monday. 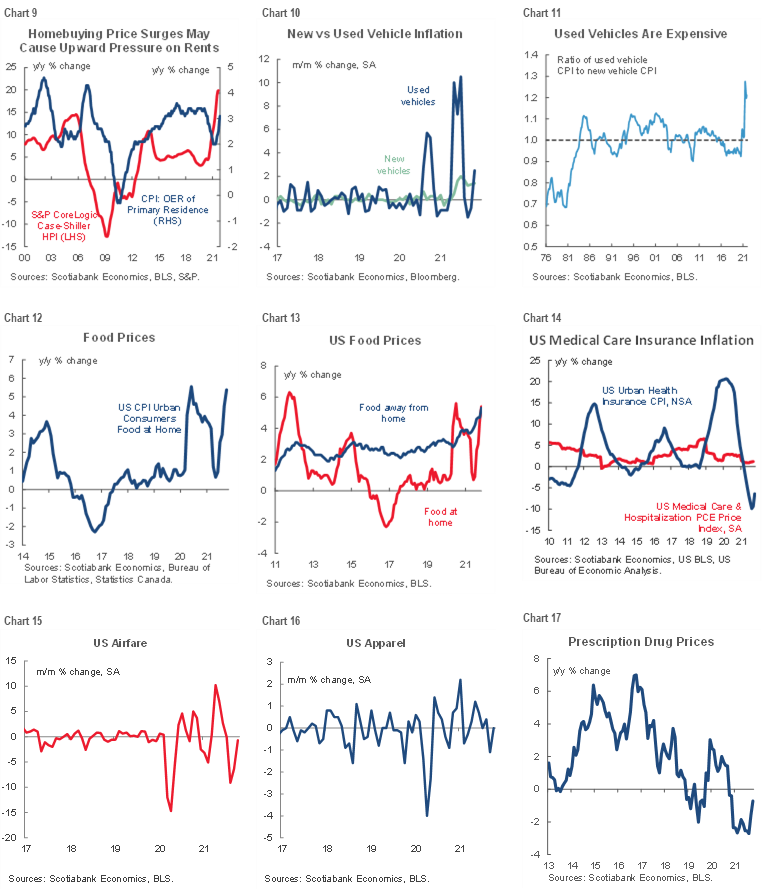 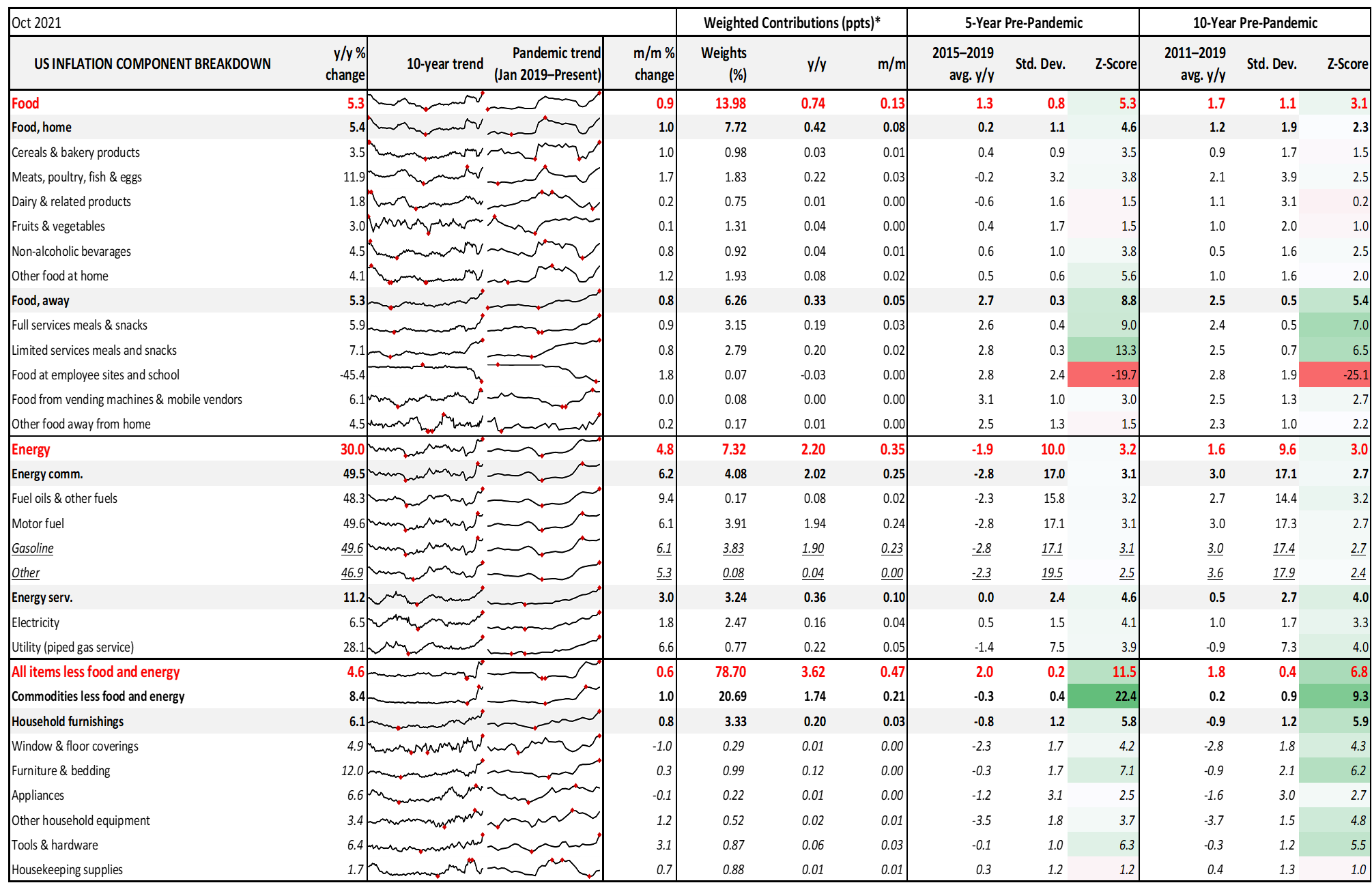 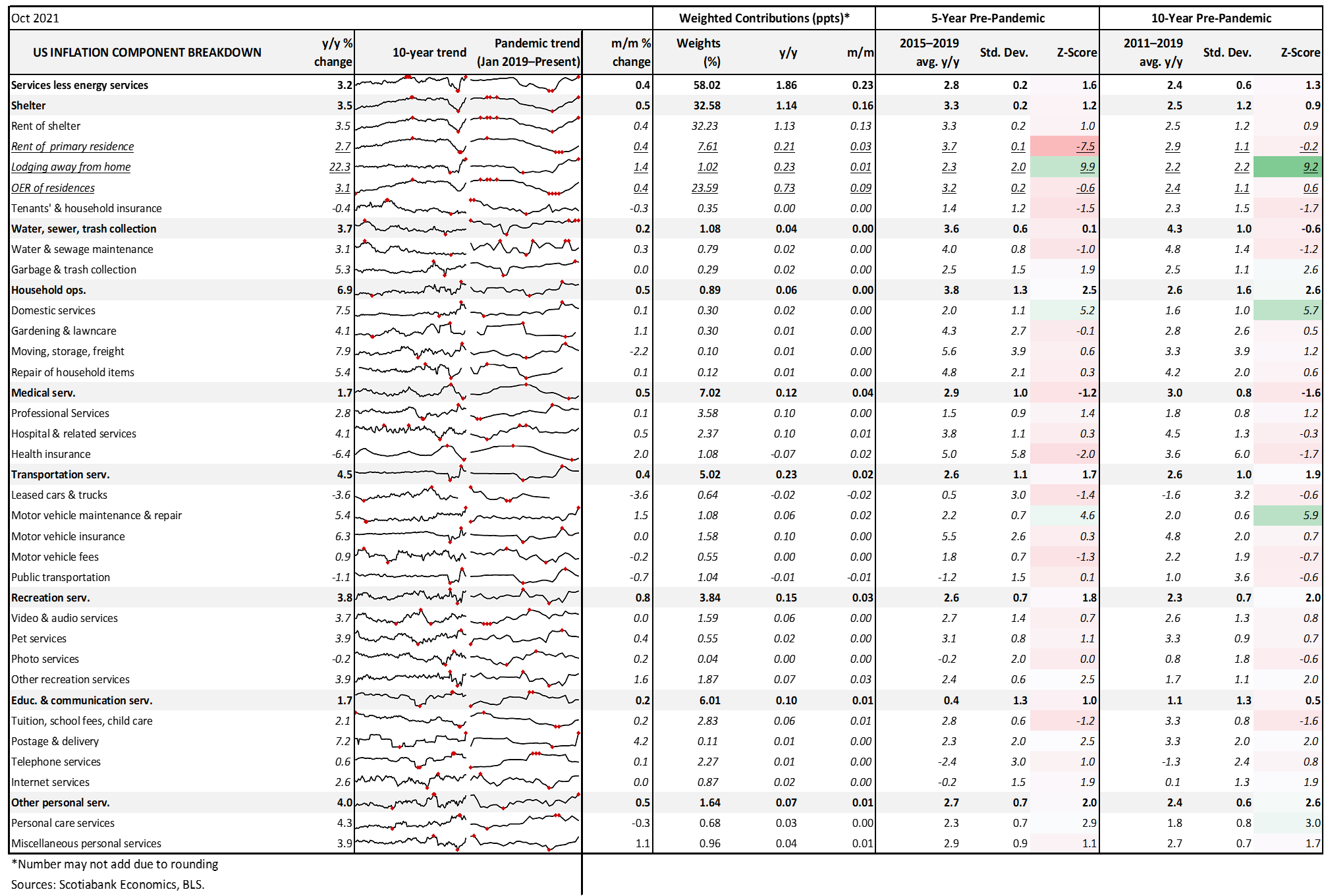 Canada is at a Critical Fork in the Road

The BoC’s “Least Regrets” Option Could be to Hike Now

All the Reasons to Ignore US Retail Sales