I’ll take a job gain that was close to my guesstimate especially given high sampling error around these figures, but it’s a dodgy achievement. The fact that private payroll employers hit the brakes on hiring last month is a significant dent to the quality of the overall employment gain but with uncertain drivers. Sickness continues to mess up hours worked, but the slide in reported wage growth halted in tightening labour markets which incrementally adds to the focus upon inflationary pressures. See the summary table. 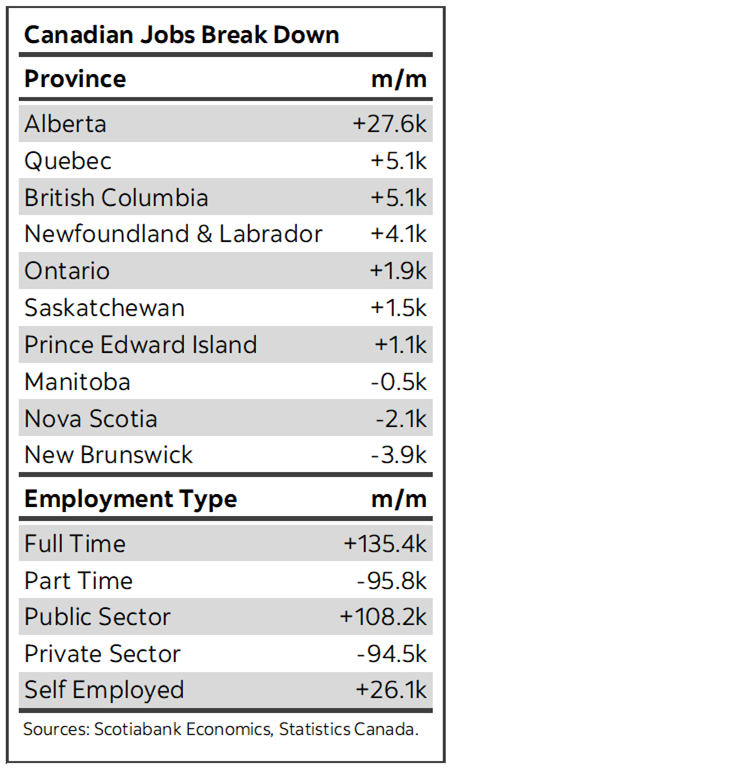 Total payroll jobs were up by only 13.6k but that was entirely due to a 108k gain in public sector payroll jobs. Private sector payroll employment fell by 94.5k. Public sector employment (+108k) was not driven by public administration (+4.5k) but at least some of it was driven by gains in education and health that must have nevertheless been held back by the private components to both of these sectors.

Self-employed jobs were also up by 26k. Many are valuable, highly productive forms of employment, but the self-reported aspect usually makes it soft data.

Total employment is now 497k higher than just before the pandemic struck. A half million more jobs than we had before all of this mess struck is further indication of labour market strengths in aggregate (chart 2). Chart 3 breaks down the cumulative changes in employment by sector to show where ongoing strengths and weaknesses persist. 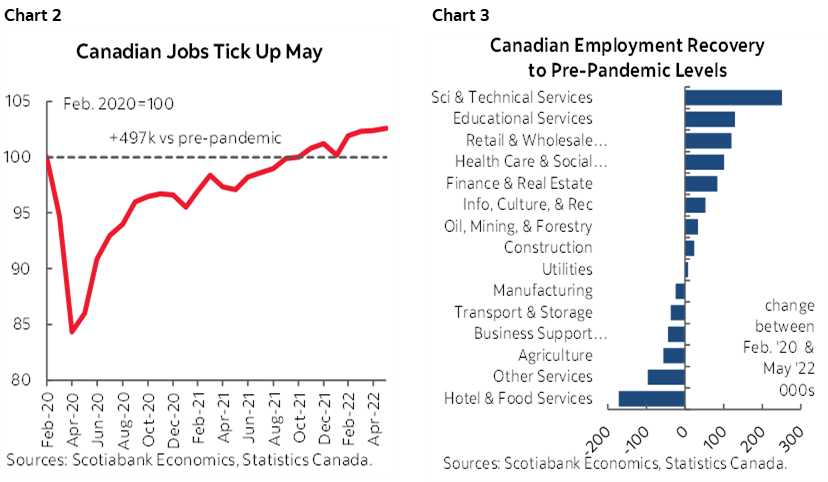 Chart 4 shows the breakdown of the change in jobs by sector. Here too the evidence was at best mixed. Goods sectors shed 41k jobs led by 43k fewer manufacturing jobs. Service jobs were up 81k led by sectors like wholesale/retail up 38k, education up 24k, health care up 24k, accommodation and food services up 20k and professional/scientific/technical up 21k. Down were jobs in transportation and warehousing (-25k), FIRE (-19k) and ‘other’ services (-7k). The aggregate gains in health and social services plus education don’t explain the big jump in public sector payrolls unless the private components of these sectors shed a fair number of jobs.

Hours worked were down 3.7% m/m SAAR which is more than Statcan’s “little changed” claim unless we’re looking at different data. This follows a 20.7% m/m annualized plunge the prior month versus massive gains of 16% in March and 52% in February. Sickness is likely the culprit here and so we should probably continue to treat it as transitory. Statcan reports that there was an 11.2% m/m NSA decline in hours lost during May that was attributable to ‘own illness or disability, away full week.”

Amid such noisy data, the smoothed pattern suggests growth in hours worked has stalled out; Q1 was up 4.4% q/q SAAR but Q2 is tracking 0.6% softer (chart 5). That, in turn, is a soft signal for GDP growth but could well be offset by activity readings that may buoy growth in labour productivity for a change. Still, if hours worked have been weak due to sickness and all of the evidence on COVID from hospitalizations through wastewater testing is pointing toward waning cases, then we may by corollary see hours worked rip higher in June-onward and take GDP up with it. 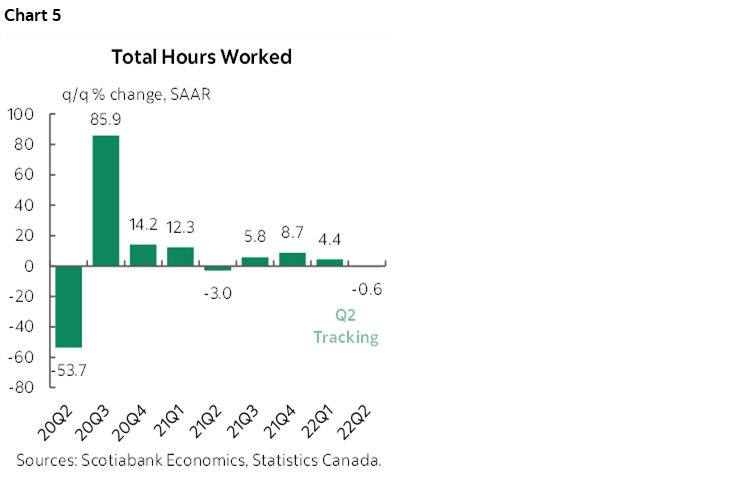 Wages accelerated (chart 6). They were up 4.9% m/m SAAR in May. That halts a three month skid that followed a string of powerful gains over the July to January period. I don’t think that can be attributable to announcements of one-off interim wage hikes by employers like banks because that did not take effect until this month (and just after the June reference week). Chart 7 shows the breakdown of wage growth in year-over-year terms by sector.

The unemployment rate edged a tenth lower to 5.1% because the job gain of about 40k was larger than the muted growth in the size of the labour force (~12k). That’s a new record low. The labour force participation rate stands at 65.3% which is unchanged and only three-tenths lower than before the pandemic.

As for Bank of Canada implications, I think they are scant to none by way of truly new information. They will be happy to see employment changes continuing to be on the plus side of the ledger albeit with some soft details, while probably looking through the sickness-driven hit on hours worked and GDP implications and they will probably also prefer to see further evidence on wage growth to inform their bias toward accelerating figures. Regardless, the BoC’s full focus is upon inflation. Full stop. In a Phillips curve sense, a future softening of labour market conditions through its effects on unemployment rates could assist the pursuit of lower and more stable inflation through monetary policy tightening, albeit that a pure Phillips curve approach is just one of many drivers of inflation these days. Canada’s overall job market remains in a state of full employment veering into excess demand. 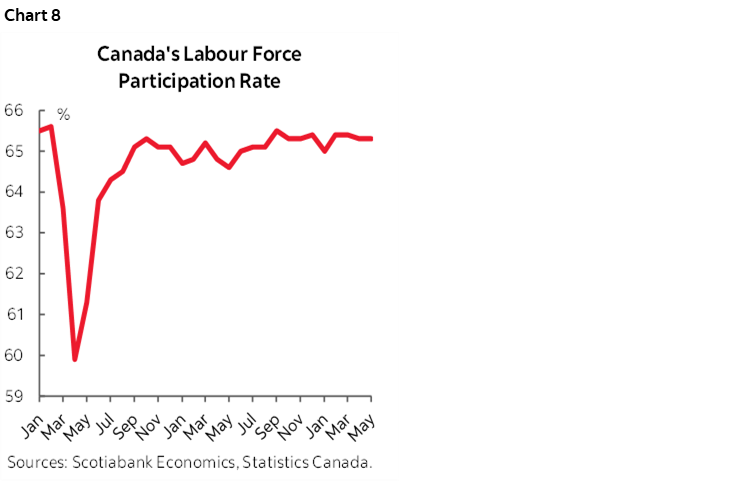