How Might the FOMC React if US Inflation Temporarily Ebbs?

US inflation landed stronger than expected in terms of pressures at the margin and with high breadth, but the overall market reaction differed somewhat across different segments. Full details at the source are here.

Headline inflation was up 0.5% m/m and core (ex-food and energy) was up 0.6% m/m, both of which were a tick higher than consensus guesstimated. At an annualized pace, inflation ended the year at 5.8% m/m SAAR and 6.8% for core. Therefore there was no letting up on price pressures into year-end (chart 1).

The market reaction was rather divided. Shorter-term Treasury yields retained their day’s slight cheapening with 2s holding steady post-CPI around minor volatility. The dollar weakened and equities initially pushed higher but subsequently reversed to being little changed on the day so far. The reasons for this slightly different response across asset classes is not fully clear. Maybe bonds rightly looked at the m/m readings as evidence of the durability of inflationary pressures whereas the other classes looked at the somewhat softer year-over-year inflation rate that was a bit weaker than expected but that means little if anything as a guide to pressures at the margin. Maybe some market segments were more positioned for a stronger beat than the beats that we actually got across the m/m readings.

TRANSITORY? FOR HOW LONG?

Will such pressures persist into Q1? That’s doubtful in my view, but the uncertainty surrounds the forces working against price pressures in high contact service sectors that are most directly affected by pandemic cases versus supply chain effects in other parts of the economy and particularly goods sectors.

We know that when pandemic cases soar, price categories for things like airfare, lodging, fast food, car rentals etc tend to soften. Hence chart 2 that depicts this effect; when pandemic case volumes soar on an inverted axis this is strongly correlated with softer inflationary pressure at the margin. Obviously this omicron-fed pandemic surge is very different in terms of sheer volumes and given the more magnified collapse across mobility readings even after considering seasonal swings. I would therefore look for a potentially more magnified negative effect on service pricing into Q2 than in prior waves.

The offsetting complication may be goods prices. Drivers of what could be faster goods price inflation are increased bottlenecks and supply side issues in general. This encapsulates challenges such as getting workers to show up, hiring new ones, and sourcing inputs in the context of often tight inventory to sales readings. Another driver is that when pandemic cases soar, they can motivate more of a shift in the composition of spending away from services toward goods and particularly through online orders. That can increase pricing power and scarcity of goods.

Given that services have a higher weight of roughly two-thirds within total consumption, the disinflationary effect of the pandemic case surge may dominate in the near-term.

Added complications to nearer-term inflation forecasting include next month’s revisions to spending weights in January CPI that will draw from 2019–20 spending patterns instead of 2017–18 spending patterns, plus the following month’s adjustments to seasonal factors.

How the Fed reads high inflation in December as it potentially gives way toward disinflationary evidence during Q1 could complicate market perspectives around policy action by the March FOMC. My hunch is that the FOMC will look through disinflationary pressures in early 2022 because a) omicron is expected to be a transitory effect that distributes growth and inflation into subsequent quarters, b) the FOMC is of the view that the US economy tends to prove itself to be more resilient than feared through pandemic waves, and c) because of where they presently sit in terms of dual mandate progress.

It’s this last point that’s key. Omicron is hitting the US economy at capacity pressures measured by output gaps, at or very near maximum employment (likely at or beyond in my view) and with inflation massively overshooting policy goals. If all that omicron does is to temporarily soften dual mandate variables then monetary policy should look through it toward conditions it can influence in the months and quarters ahead.

At the margin, that likely keeps alive pressure to hike as soon as the March FOMC meeting while getting toward something more neutral faster than markets are pricing. On balance sheet run-off, Chair Powell sounded as if he was leaning to “later” in the year as a signal against some of the more hawkish voices that would prefer skipping reinvestment or ending it very soon after a first hike. That could mean that reinvestment is tapered or ends by about the September FOMC.

This last point matters at least as much as the policy rate. When the curve inverted the last time, the Fed had less than US$2 trillion of Treasuries in its SOMA account and in the vicinity of US$1 ½ trillion of MBS. At present, the Fed holds two-and-a-half times as much in Treasuries and more than $1 trillion in additional MBS. If the Fed wants to steepen out the curve by raising the crushed term premia, then it has greater ability to do so just as issuance pressure returns than it did the last time. This is part of the reason behind our forecast for the US 10 year yield to cross 2% and head toward 2½% into 2023 while not ruling out greater upside risk.

Details details, yes we’ll get to them now.

Chart 3 shows the year-over-year changes in prices by category. Chart 4 does likewise but weights their relative contributions by using their relative importance as a share of the consumption basket. 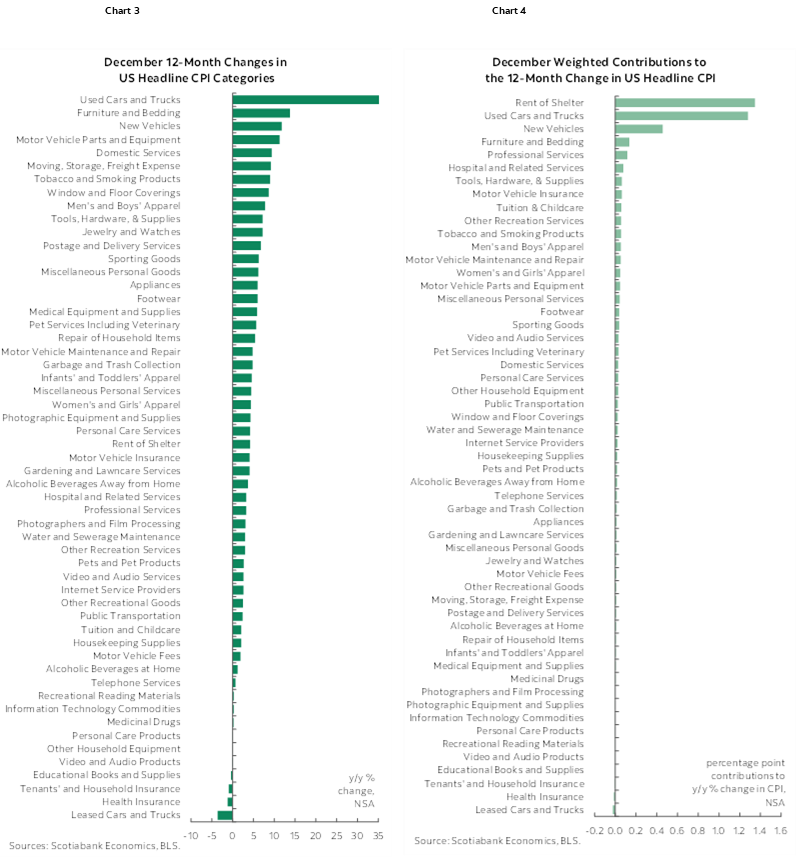 Chart 5 shows the month-over-month changes in prices by category. Chart 6 does likewise but uses weighted contributions. 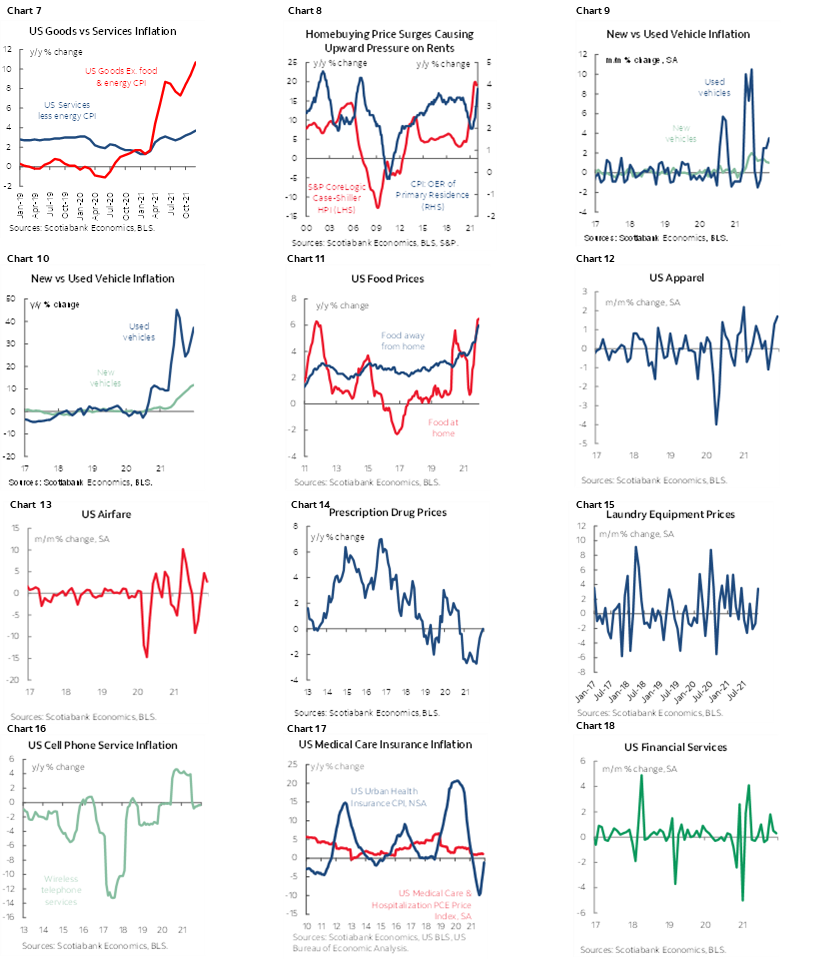 Across high contact pandemic categories, airfare was up 2.7% m/m, car rentals were down 5.3% m/m, intracity transport was up 0.9% m/m, lodging away from home was up 1.2% m/m, and take-out prices were up 0.6% m/m. Americans’ appetite for high contact services was unaffected by the early stages of omicron uncertainty as price effects probably lagged somewhat. I’d repeat that these same pandemic categories that were the ones that were generally lit up again in December are the ones that are vulnerable to downside risk into Q1 as mobility cratered.

All of this illustrates how badly the Fed and particularly Chair Powell got inflation dead wrong by a) saying it was transitory, b) saying there is narrow breadth and c) saying it was just driven by idiosyncratic pandemic effects. When it's your home, your vehicles, your groceries, and clothing and appliances etc etc that are all being lit up, then it's definitely the bulk of things most people consume.

At the same time, the Fed’s focus upon inclusion last year led it to overestimate that amount of slack that existed in the US job market. We’re now at the point at which wage pressures are reflecting much tighter job markets.

In Powell’s partial defence, it’s true that many forecasters and including markets did not expect inflation to be this high if we go back to expectations that were being set at an earlier stage of the pandemic. Where I fault the Fed Chair, however, was in lacking humility when forcefully taking just one single side of the inflation argument by sounding completely convinced that it was all just a head fake. The Fed Chair should have been more balanced and circumspect toward the evidence as it rolled in. Because he went to the tail of opinion on what was driving inflation, we are now in a position whereby the Federal Reserve is well behind the curve and facing the risks of having to act later than would have been preferred. The same holds true for having overestimated labour market slack and hence underestimating wage pressures.

Please also see the CPI dashboard table on the last pages of this publication. It’s created by Marc Ercolao and does a nifty job at summarizing component changes with miniature charts and includes figures like standard deviations and z-scores in order to show the magnitude of movements relative to norms. 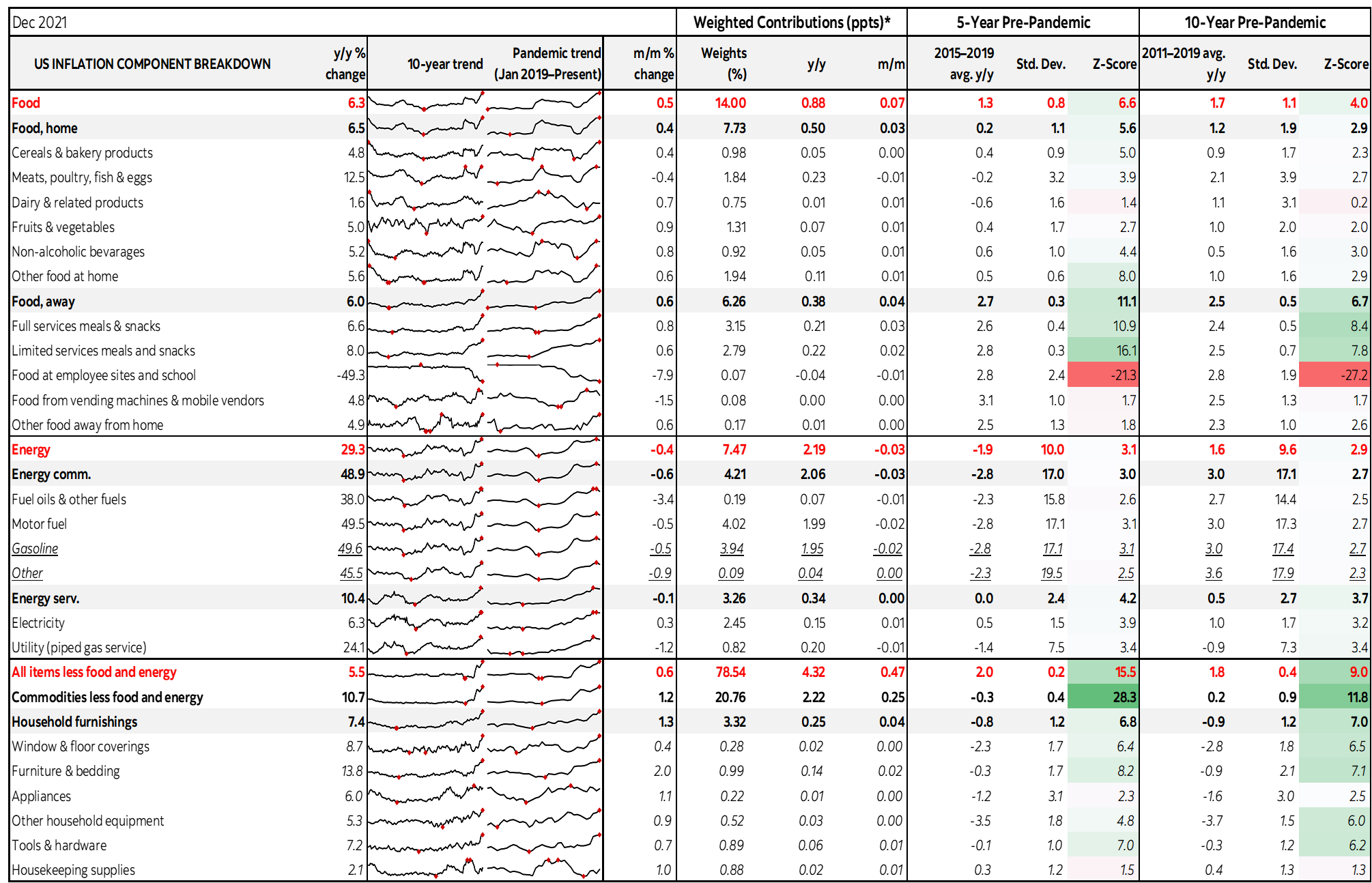 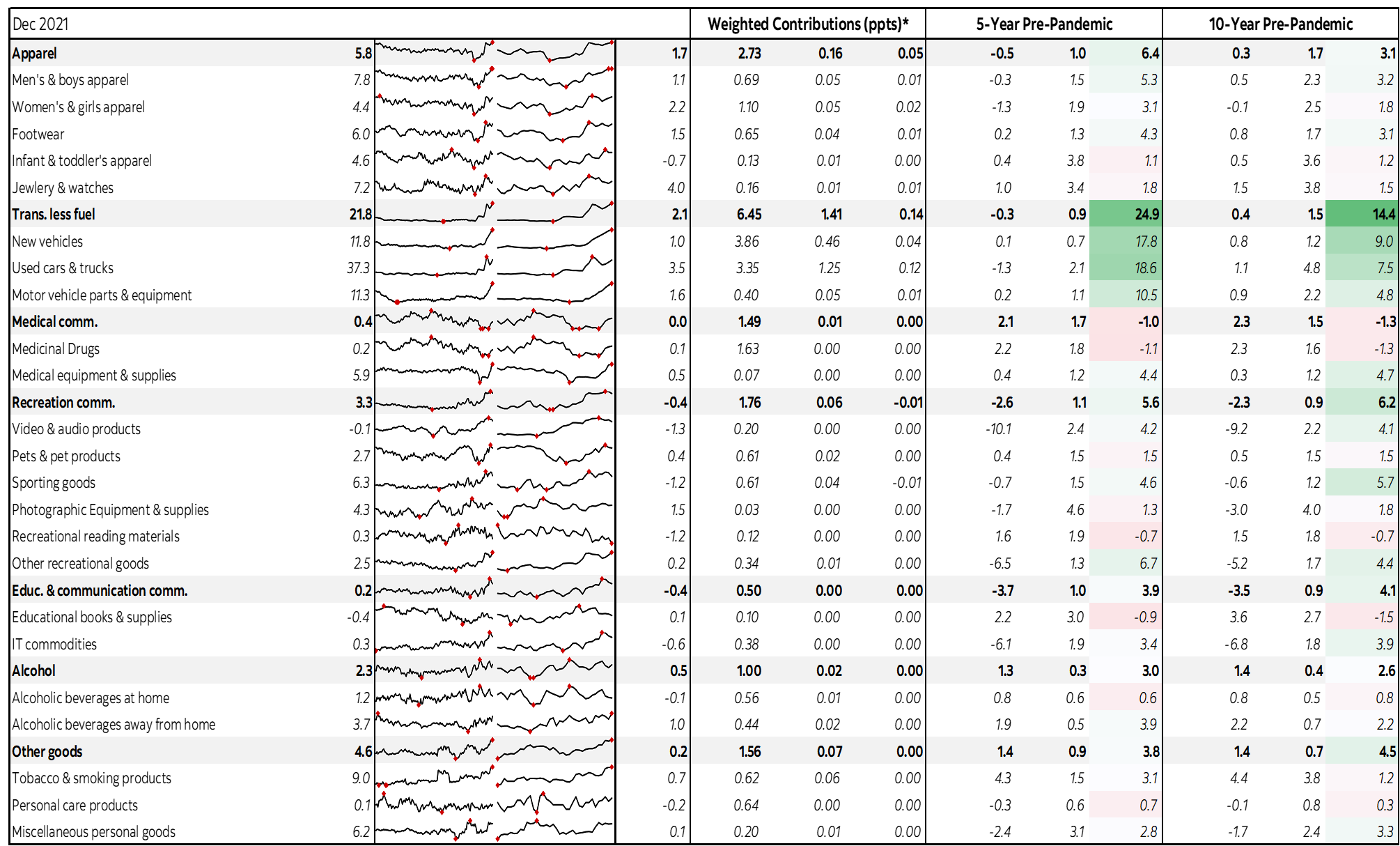 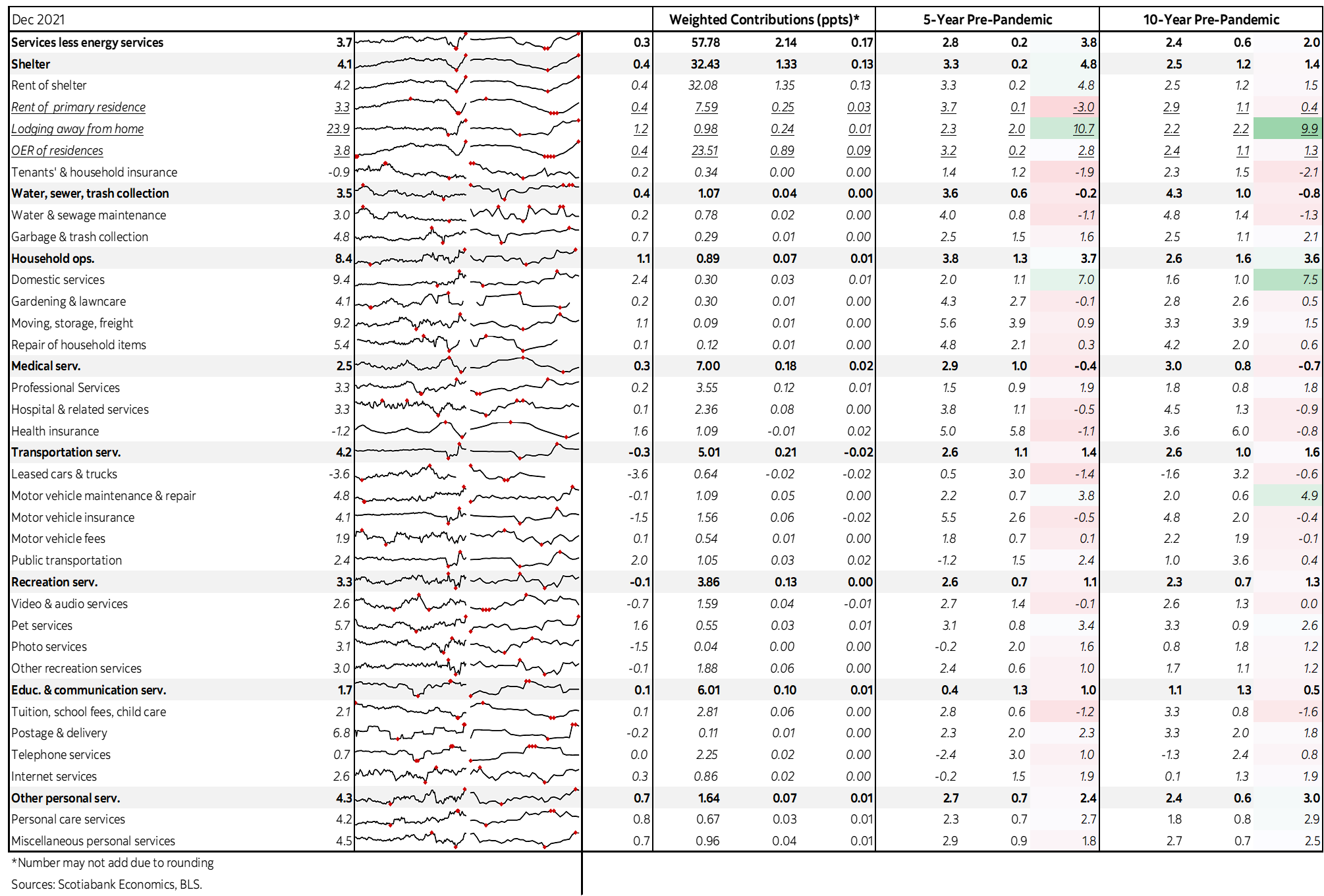