Canada Heaps on More Jobs and Hours, as Productivity Tanks

Canada posted another healthy job gain as the economy at least temporarily distanced itself from omicron into the March reference week. Highlights are shown in chart 1. CAD and Canada yields were little affected by the release. 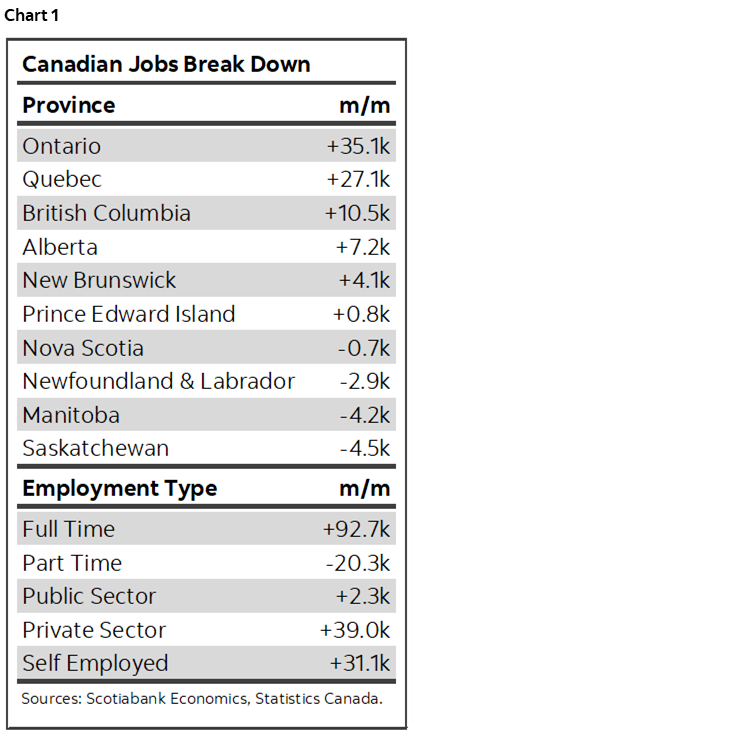 The broad details were generally constructive as noted below. Flies in the ointment include another month of weak wages, worsening labour productivity and the forward-looking question mark over resilience in the face of the country’s sixth wave of COVID-19 cases. The pairing of the first two observations together is inflationary on net as the labour market is getting tighter and tighter.

On balance that means that the overall report is unlikely to sway the Bank of Canada’s decisions next Wednesday as it stays on track toward what we expect to be a half percentage point hike in the overnight rate and full quantitative tightening via 100% roll-off limits.

Canada is now 209k above pre-omicron employment levels back at the end of December. Canadian employment is now 442k higher than pre-pandemic levels (chart 2) while the US household and nonfarm measures are still net down by a fair margin. The US has had some retirements whereas evidence of such is lacking in Canada, but I still think that Canada's labour market is materially tighter than the US. That has come at the expense of relative productivity growth which means higher inflation risk all else equal north of the border than south. 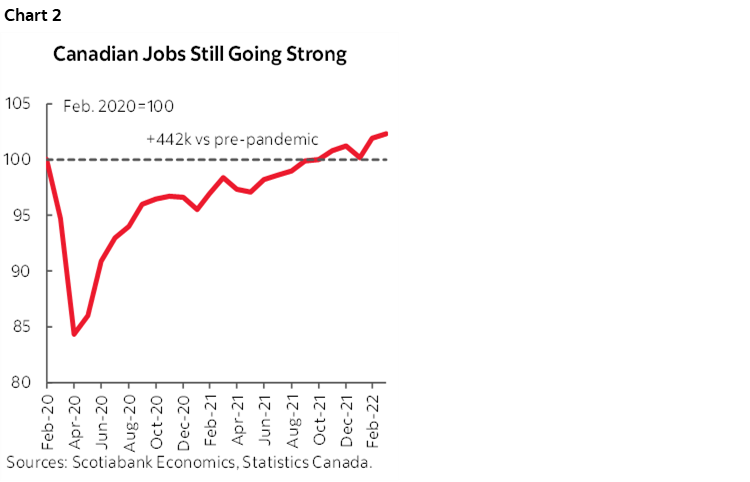 How is Canada’s job market tighter? For starters, if Canada measured the UR like the US does then its 4.6% adjusted rate is only 1.0 ppt above the US at 3.6%. Canada uses a more liberal and relaxed definition of what constitutes searching for work and for some reason starts counting folks at 15 versus 16 years of age, among other methodological differences.

Further, Canada's R8 all-in measure of underemployment that includes discouraged workers, folks working part-time who'd prefer full-time etc sits at 8.3% versus the US U6 measure at 6.9%. This measure, however, is not adjusted for methodological differences. StatCan only does that for the traditional URs.

But unemployment rates only capture part of the slack argument. They have to be expressed relative to highly uncertain estimates of how low they can go before wage pressures are ignited. Each country has different trip points. So where does Canada stand in terms of labour slack? If the unemployment rate measured similarly to the US is only slightly higher, but most estimates of Canada's NAIRU (non-accelerating inflation rate of unemployment) are above the US as a guide to the trip point beneath which labour market conditions become inflationary, then you'd have to portray Canada's labour market as tighter than the US. This is shown in chart 3. Canada's NAIRU is usually judged to be higher than the US due to various drivers of structural unemployment. 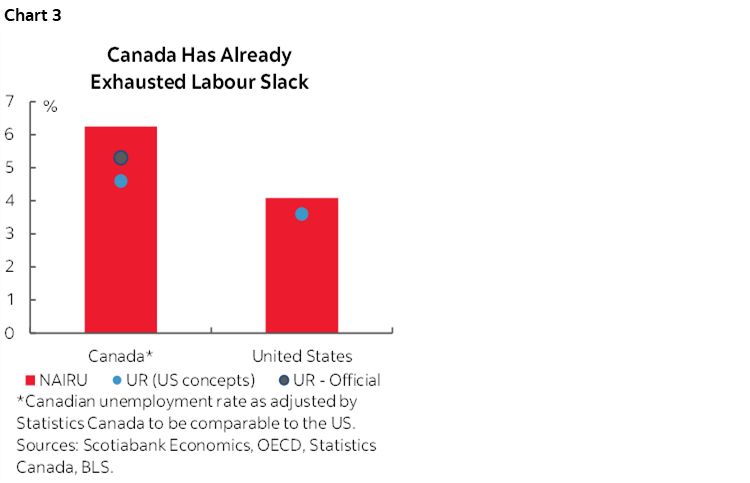 Therefore, if the only thing that mattered was the labour market tightness angle, then the BoC should be hiking faster than the Fed. That has been among the underpinning points of why we had the BoC's terminal rate at 3%, above the Fed's 2.5% although we are likely to raise the latter in our upcoming forecast round.

This makes me skeptical toward real bond pricing of inflation breakevens that show the US higher than Canada. Canada underestimates CPI inflation by 1–2% in y/y terms and has tighter labour markets with worse productivity while it is importing a positive terms of trade shock that the US is not getting, yet the market judges inflation risk to be higher stateside (albeit with highly impure gauges).

Most of the details around the job tallies were pretty good. 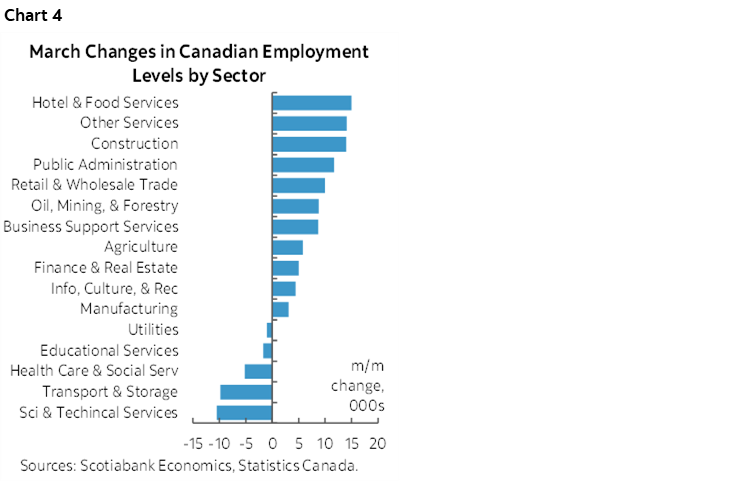 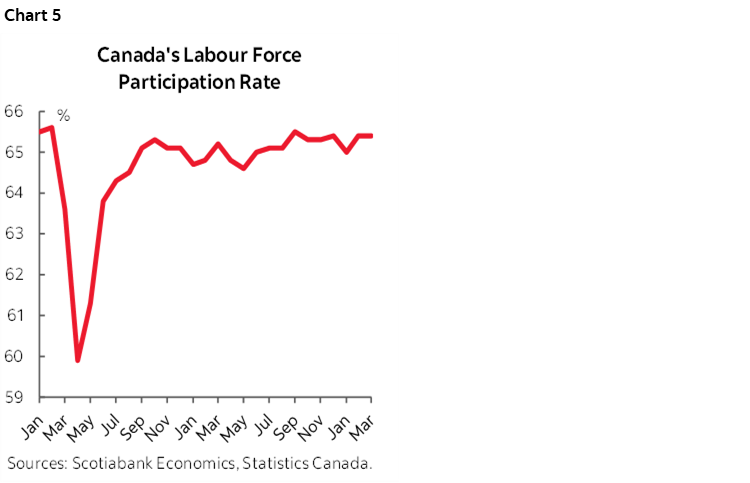 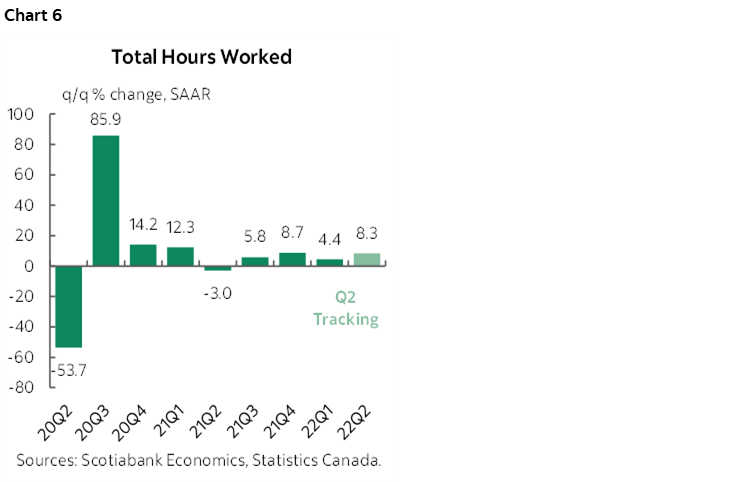 One negative took the form of another month of weak wages. Average hourly wages of permanent employees used to be the BoC’s preferred measure and it still benefits from being the most timely gauge of wage pressures. It was down 0.3% m/m at a seasonally adjusted and annualized rate. That’s tiny, but the month before saw a decline of -3.6% and so we’ve had a couple of months of softening after a string of about 6.0–8.5% m/m annualized gains since last July (chart 7). This is unlike the US that had a soft patch for wage growth in February and then rebounded in March. 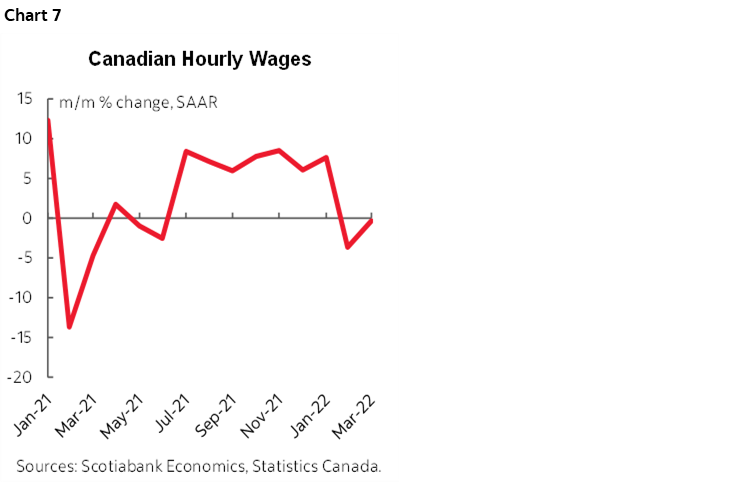 It’s not clear to me why this is happening. One theory could be that jobs coming back may be lower paying high contact service jobs, but the composition of the job gains this month doesn’t lend much support to that average weighting argument. Further, we didn’t see this happen during the Delta closing and reopening periods, so why during Omicron?

Even though it doesn't win popularity contests to speak about it, the cost to all of this is that productivity growth which is worsening. The GDP surge is still being driven by bodies and hours but unlike the US, Canada continues to face declining absolute levels of real GDP per hour worked (chart 8). It’s among the worst performances on this relative yardstick in history. 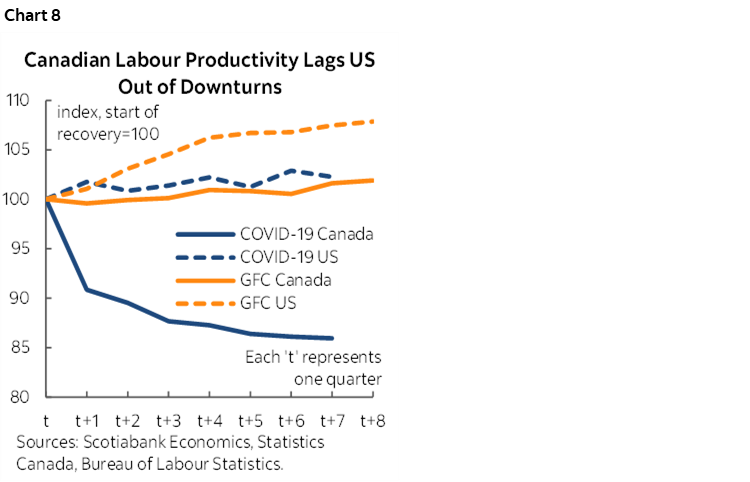 That’s important because most economists would argue that productivity is an important driver of longer run real wage growth. On average, wage gains above the cost of living pressures are more likely to be sustainable if workers are able to produce more output per hour worked than in the past. Poor productivity (falling!) is not a great harbinger of future living standards. That’s one reason why I didn’t like yesterday’s budget that—despite the political sloganeering—had nothing of substance to offer in terms of addressing the nation’s number one economic challenge which is the interplay between tanking productivity and soaring inflation. Failure to treat this seriously risks impairment of fiscal conditions in future.