US core CPI inflation landed shy of consensus expectations and in line with my guesstimate at the bottom of consensus. Core prices were up by just 0.3% m/m SA (consensus 0.5%). That caused Treasury yields to plunge in a bull steepener move that softened the dollar and was lapped up by equities that moved higher following the numbers. The rise in headline inflation marks the strongest deviation from core price pressures and hence the biggest relative price shock that we’ve seen so far in the pandemic (chart 1). Year-over-year core CPI inflation remains under upward pressure that should pop core PCE inflation a little higher toward month-end (chart 2). 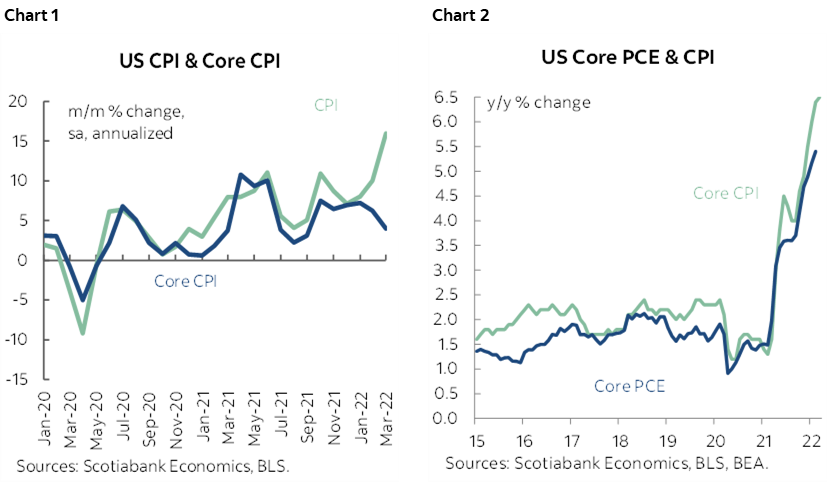 The reasoning for this market reaction is some combination of wrong positioning and that softer core inflation could rein in some of the sentiment that posits the terminal fed funds rate has to sharply overshoot the neutral rate which is the narrative set forth by the likes of Bullard and Dudley. One month certainly doesn’t invalidate their thesis, but it leans against it particularly given how markets were positioned going into the CPI readings.

So is core inflation waning? That’s unclear to me. The way to look at it properly is on a month-over-month seasonally adjusted basis at an annualized rate that is clean of year-ago base effects and more indicative of price pressures at the margin. By this yardstick, core CPI was up by 4% m/m SAAR in March after a 6.2% rise in February and a 7.2% gain in January. Because the latest month is lower than the year-over-year rate of core inflation it may be indicating waning core inflation, but clearly one month doesn’t make a trend. A caution in this regard is that we’ve seen periods like this in the past like July through September last year when this measure ran in the 2–4% range before accelerating again.

Given that the US pushing into excess aggregate demand alongside persistent supply chain problems that if anything are worsening by the week while labour markets continue to tighten, one should be cautious in viewing a single month of data as evidence that core inflation is waning. There is always a part of me that thinks whippy markets always overreact to single data points. A sailboat skipped by markets would risk capsizing on the tendency to violently lurch from one side of the boat to the next as each ripple laps the side of the boat.

One specific uncertainty this time concerns what is happening and what will happen in future to used vehicle prices. They fell by 3.8% m/m SA this time which was in line with my expectation. If not for lower used vehicle prices, headline CPI would have been 0.5% m/m and would have met consensus expectations. The point is that softer core CPI had an idiosyncratic driver which is why when forecasting monthly CPI I use a bottom-up components approach toward what we can observe, as opposed to say a Phillips curve approach that isn’t very useful in forecasting higher frequency inflation readings (and of limited use applied to longer-term expectations).

What will happen to used and new vehicle prices in future? Some point to future passthrough from higher producer prices into new vehicle prices including categories like various metals while semiconductor shortages persist. That could mean higher new auto prices particularly when new model lines with fresh sticker prices get rolled out in a few months. That, in turn, could back into used vehicles as an affordability outlet. Some also point to distortions to new and used auto prices around tax refund season and shortly thereafter and so we need some distance from the fact that the refund season remains soft. Also note that higher gasoline prices may have eaten into demand, although gas prices have been gently pulling off the peak for about one month now and so this effect on auto demand may stabilize or turn the other direction. Further, auto demand may be crimped by higher financing charges, but only if a) auto companies don’t cross-subsidize funding rates one way or the other, and b) only if the Fed delivers on something broadly similar to what’s priced.

With that in mind, I'll want to see tomorrow's producer prices for March and particularly the auto related categories that should surge on what's happened to metals etc. So the key will be what amount gets passed into CPI versus absorbed into margins and with uncertainty around lagging effects given contracts etc.

Also note that whereas we've had a couple of months of cooling core pressures now, another debate is whether higher food and energy prices and mounting nominal wage pressures will get passed through core or whether some of that is crowding out purchasing power and dampening core pressures.

As for drivers not called autos:

Please see charts 3 and 4 for weighted contributions to CPI and unweighted changes in month-over-month terms across individual portions of the CPI basket. Also see charts 5 and 6 for the year-over-year analogs. 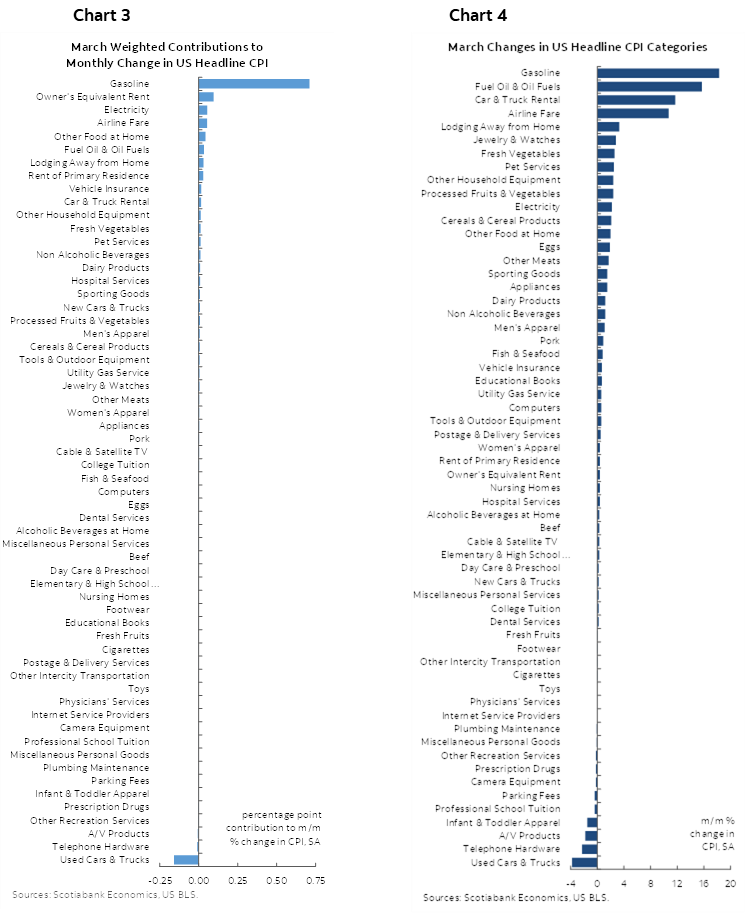 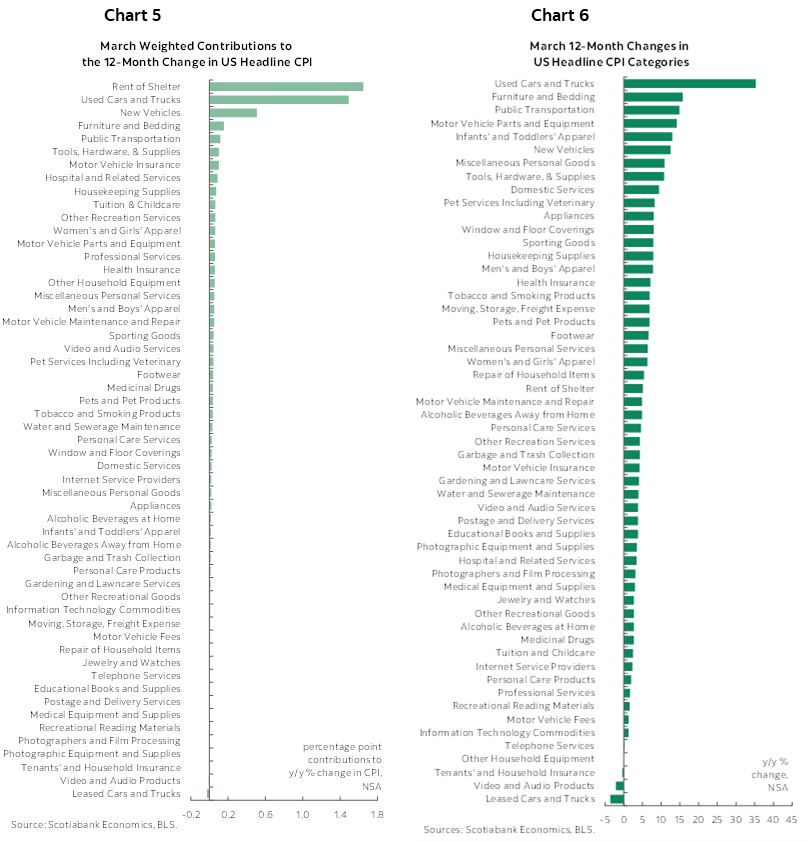 Finally, please see the table at the back that depicts various measures of the CPI basket including deviations from recent multi-year norms (Z-scores). For more detail see the BlS table here. 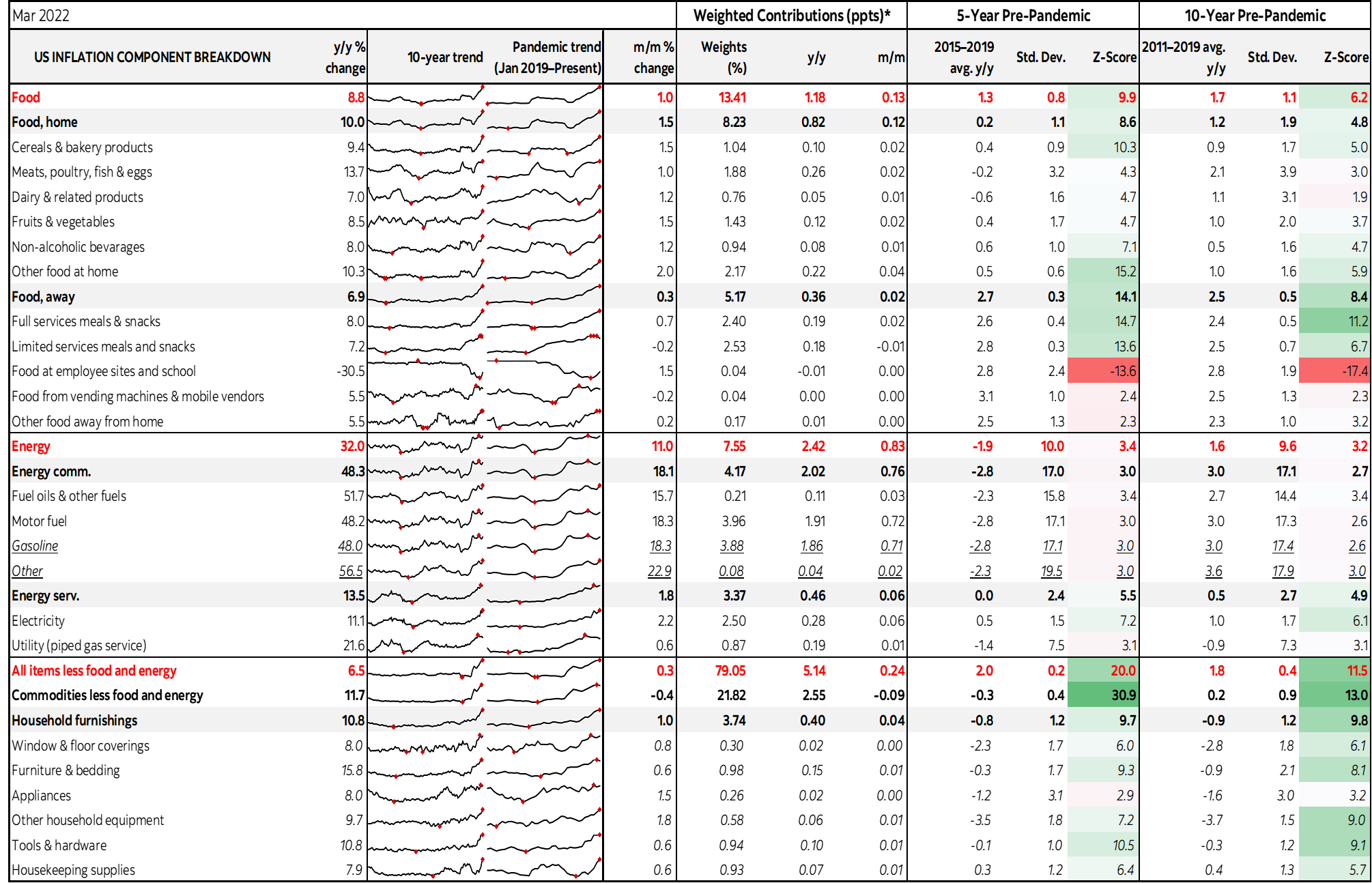 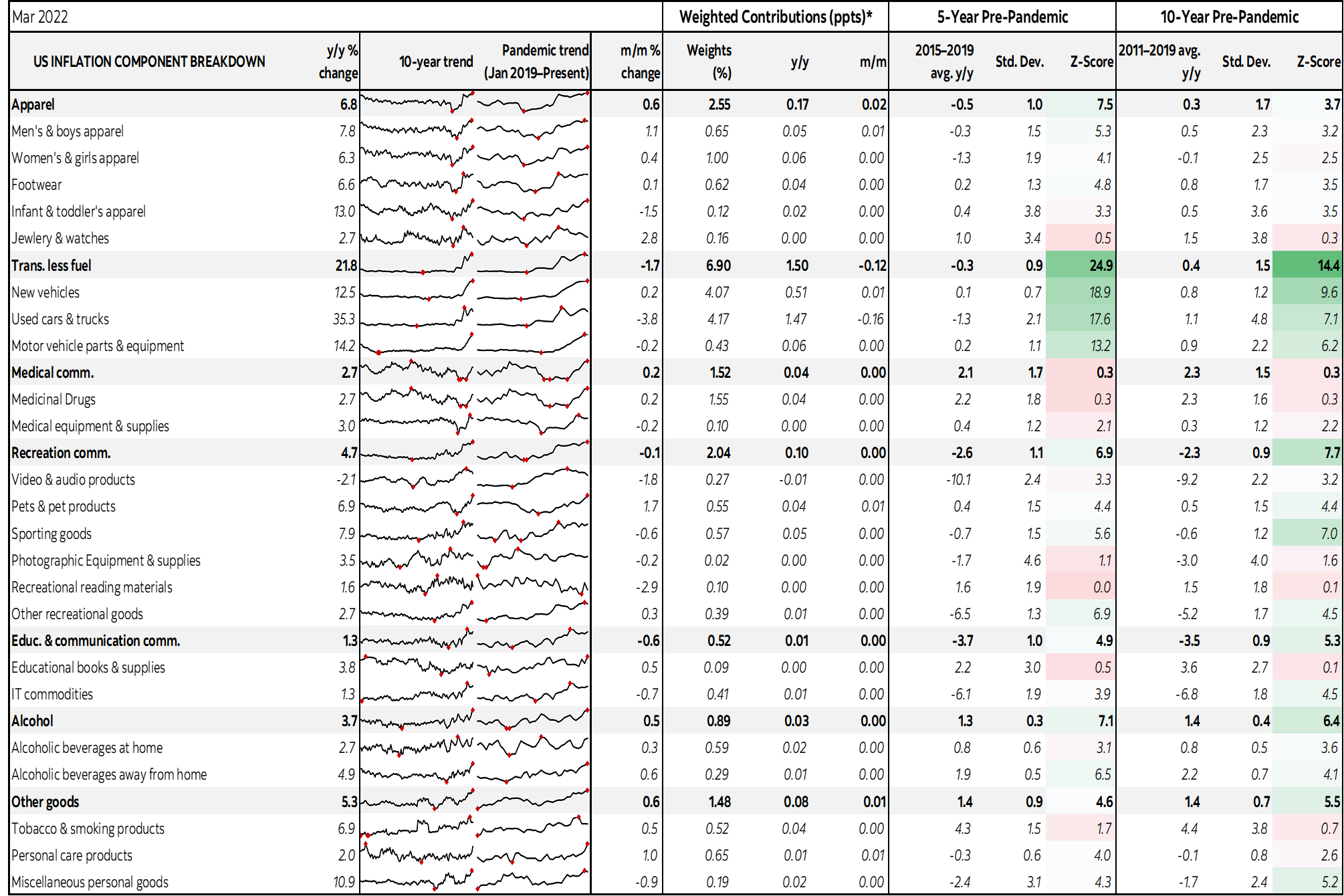