I. First quarter growth at a robust 3.8% y/y, but investment disappoints

The BCRP published the official breakdown for first quarter GDP growth. The aggregate growth figure, 3.8% y/y, was already known, but the breakdown by demand component is informative on a number of counts (table 1).

First, domestic demand, at 2.5% y/y, underperformed GDP growth significantly (chart 1). Thus, 6.2% y/y export growth gave support to GDP growth. Metals contributed a bit to this, but other drivers of growth were more important, including agro-industry, and the recent return of textile exports as an important component in exports. Second, domestic demand would have been much lower if not for consumption, which surged 6.9% y/y. This was in line with consumer loans growth of over 16% y/y at the end of the quarter, which was possible because households had used their pension fund and CTS withdrawals in 2020–2021 to reduce debt, giving room for the current expansion in debt.

Third, robust consumption was in sharp contrast with investment. Private investment rose a paltry 0.8% y/y, and is likely to continue decelerating gradually, crossing into negative territory, in line with our expectations of -2% growth in full-year 2022 (chart 2). Public sector investment was even more dismal, falling 13.7% y/y, the second consecutive quarterly decline (chart 3). It is our contention that this reflects the government’s low investment capability. 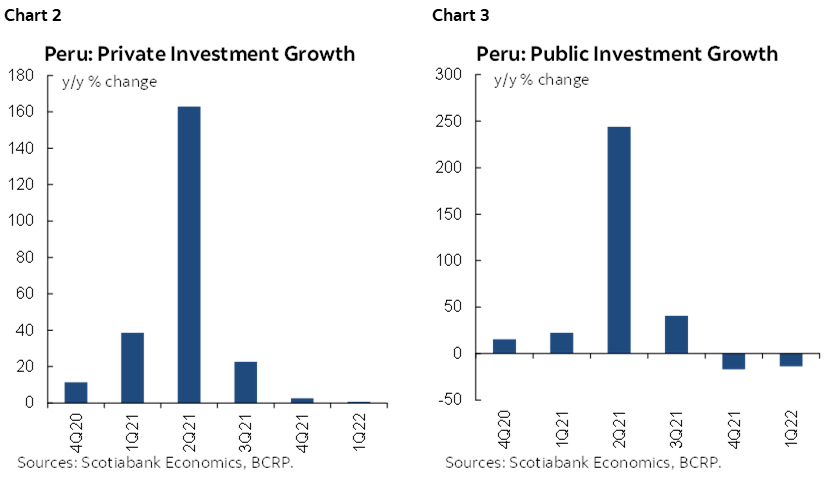 Fourth, inventories also declined, down 3.0% y/y. It’s difficult to gauge to what extent this reflects greater demand than expected, as consumption growth would suggest, or caution on the part of companies in replacing inventories or ramping up production, given low business confidence.

The bottom line is: consumption remains surprisingly robust, even as investment decelerates quickly, in line with expectations. This in an environment in which exports are holding their own. Given this scenario, we are comfortable with our forecast of 2.6% GDP growth for the full year. The initial, and still weak, signs of a slowdown seen in Q1 are likely to become mildly more evident in Q2, with GDP falling below 3%.

1. Alessandra Herrera at the Ministry of Energy and Mines replaces Carlos Palacios, who was widely seen as not being capable, or willing, to resolve the conflicts at mining operation, such as Las Bambas (copper).

2. Dimitri Senmache at the Ministry of the Interior replaces Alfonso Chavarry, who was being criticized for his role in implementing a curfew in Lima which led to marches and protests.

3. Juan Barranzuela at the Ministry of Transportation, who replaces Nicolás Bustamante, a person linked to the former Minister Juan Silva, who is under investigation for malfeasance.

Latam Daily: Unemployment Rate Rises in Both Chile and Mexico