Banxico delivered the consensus estimate 50 bps hike in its May 12 meeting. All but one of the 24 economists surveyed by Bloomberg anticipated the 50 bps move, while the sole outlier called for +75 bps (chart 1). There is a case to be made for accelerating the path of hikes in Mexico, as inflation continues to edge higher. Our sense is that there is less slack capacity than the macro data analysis suggests, given weightings for GDP and inflation metrics both come from pre-pandemic era, and the likelihood that some of the changes in spending habits that the pandemic drove are long-lasting (chart 2). However, the Federal Reserve’s deliberate tightening pace gave Banxico room to hold off on accelerating its pace, allowing it to keep its tightening pace constant at +50 bps. 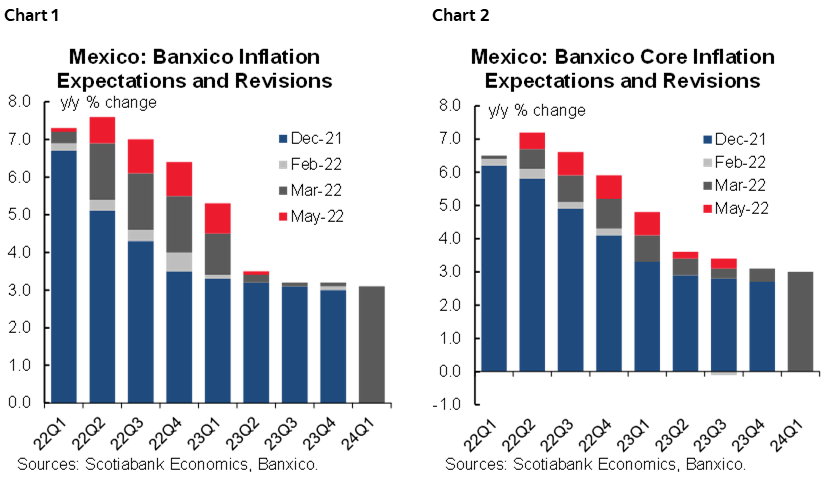 The inflation control package the government announced last week is likely to have only a modest and temporary effect, as a large share of it was already incorporated into expectations (especially the gasoline subsidy components), and its duration was announced to be six months, while we expect the inflation shock to be longer lasting. In addition, the bulk of the government’s package involves fiscal spending components, whether a direct subsidy, a cap on administered price rises, or other measures. This suggests that for interest rate settings and overall market rates, the package implies a trade-off between inflation and the credit premium, which we anticipate will lead to curve steepening (lower short-end rates owing to a temporary reprieve in inflation pressures, but higher long-term rates reflecting the fiscal cost), as well as moderate widening in Mexico’s CDS.

In terms of the Board’s decision, the decision was likely split, though it is noteworthy there was only one dissenter (Irene Espinosa) instead of the two dissenters some anticipated (some observers we spoke to also expected Jonathan Heath to support a +75 bps hike). Also matching expectations, Banxico made upwards revisions to its inflation forecasts for Q3-2023, in both headline and core inflation. Moreover, in arguably the most hawkish line in the statement, the Board said it would “consider acting in a more aggressive manner in order to meet its inflation target”. This sentence opens the door for a potential acceleration, if inflationary pressures fail to be re-anchored.

The Board of Peru’s central bank (BCRP) raised its key interest rate by 50 bps to 5.00% on Thursday, May 12, in line with the market consensus (Bloomberg), the interest rate swap market and Scotiabank forecast. The decision is consistent with the more aggressive stance adopted by the BCRP at the beginning of the year and continues the normalization of monetary policy that began in August 2021. That said, Peru’s monetary policy interest rate (5. 00%) remains one of the lowest in the region.

We raised our policy rate forecast from 5.00% to 5.75% for end-2022 last month (Latam Weekly, April 29), in response to an increase in inflationary expectations. With that revision, we incorporated the upward bias that we had been carrying, so that the current bias is neutral.

The BCRP statement accompanying the rate hike continues to express concern about inflationary pressures coming from high international energy and food prices, which have raised inflation to almost 8.0% y/y in April. Reflecting these effects, 12-month ahead inflation expectations continued to rise in April, from 4.39% to 4.62%, remaining above the inflation target range for the tenth consecutive month. Because the rise in inflation expectations was less than the 50 bps rise in the policy rate, the real policy rate rose from 0.11% to 0.38%. Nevertheless, the stance of monetary policy remains expansionary as it is below the real neutral rate of 1.5% (chart 3). Year-over-year inflation should start to decline in July, as base effects kick-in and factors on inflation, such as the FX rate and international energy and soft commodity prices ease. The BCRP maintained its expectation that inflation will return to the target in the Q2-2023 and Q3-2023. 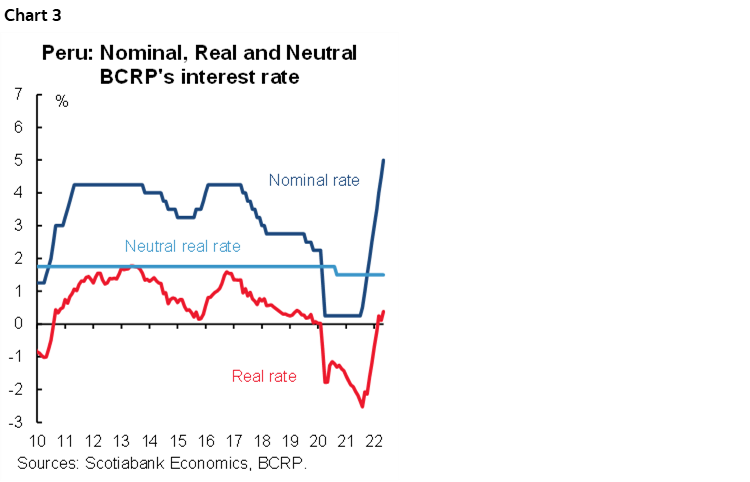 Given the persistence of inflationary pressures, the BCRP reiterated that it will remain attentive to new information on inflation expectations and the evolution of economic activity, indicating that it is prepared to consider additional measures to ensure that inflation returns to the target range. This phrasing suggests that the BCRP could contemplate an additional hike of 50 bps at the June 9 meeting. We also expect the BCRP to evaluate the possible use of complementary measures, such as an additional increase in reserve requirements.

The quantity of money (M3) contracted -4.3% y/y in March, falling for the fourth consecutive month, as part of the monetary normalization process (chart 4). However, loan growth continued to rise, going from 6.7% y/y in February to 7.3% y/y in March. 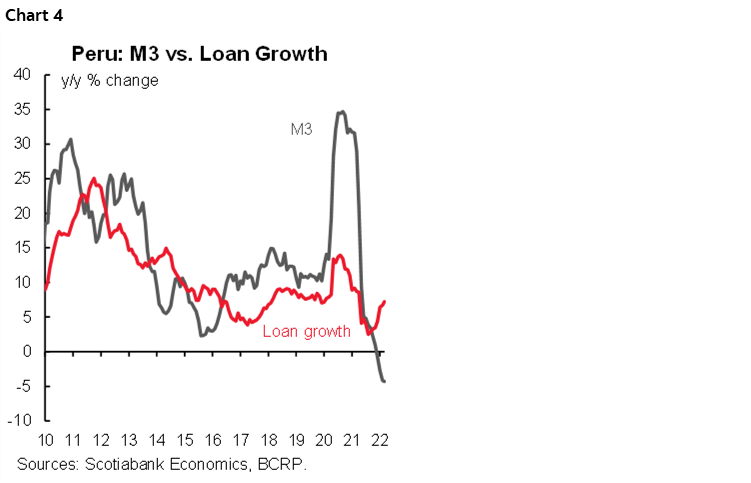