CHILE: FX SALES OF USD 5 BN LIKELY TO LEAD TO AN APPRECIATION OF BETWEEN USD 10 TO USD 15; FX INTERVENTION BY THE BCCH WILL ALSO BE WEIGHED BY THE MARKET

On Friday, June 24 the Ministry of Finance announced the sale of USD 5,000 million dollars at a rate of USD 200 million per day after the exchange rate reached USDCLP 919. The announcement followed Scotiabank Economics’ call that an exchange rate of between 900–920 would trigger actions by the BCCh and/or the Treasury to contain the depreciation.

Inflation close to 13% has become a political problem in the midst of the process to draft a new Constitution, which polls suggest could be rejected in the upcoming ratification vote. The recent depreciation of the peso makes the inflationary situation even more complex. While central bank intervention remains an option, should the actions announced by the Ministry of Finance strengthen the peso below USDCLP 900 in the short term, we believe the likelihood of foreign exchange intervention by the BCCh would be reduced.

MEXICO: IMPORTS AND EXPORTS ACCELERATED IN MAY, RESULTING IN A SECOND CONSECUTIVE MONTHLY TRADE DEFICIT 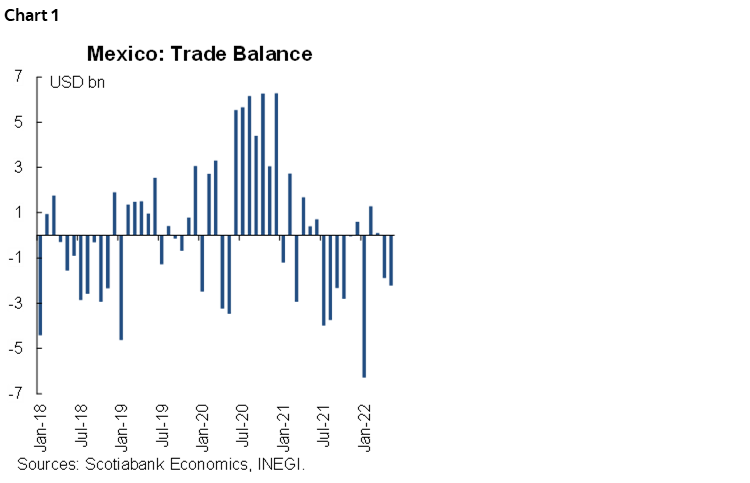 Going forward, some uncertainty persists regarding supply chain disruptions and its impact, especially on manufactures exports. However, we expect exports to show greater dynamism as global supply chain issues and supply shortages begin to unwind. Additionally, rising rates and persistent inflation dynamics in both Mexico and its trading partners represent a downside risk to imports and exports as economic activity is expected to slow.

The government plans to expand the budget for 2022 by nearly 1% of GDP. Finance Minister Oscar Graham announced that the government is preparing a bill to increase fiscal spending by as much as PEN 9 bn (USD 2.4 bn) to allow a PEN 2 bn transfer to low-income households to compensate for inflation. Other spending initiatives would include agricultural support through the purchase of fertilizer, support for low-income housing, with the additional intention of generating jobs in construction, and additional resources for local government investment projects.

Minister Graham stated that the strong fiscal accounts allow room to increase the budget and counter the impact of inflation, without jeopardizing fiscal responsibility. We agree with this. We had originally projected a fiscal deficit for 2022 of 3.0% of GDP but have since lowered our projection in two steps to our current forecast of 1.5% of GDP. In principle, the measures could increase the deficit back above 2%, although this will depend on execution, which has not be a strong point of the current government. However, even if this were the case, the fiscal situation would continue to be manageable, given that the new spending initiatives would be one-offs.

Minister Graham also stated that the government was contemplating measures to compensate land transportation of cargo for high fuel prices, such as a direct transfer, reimbursement of toll payments, or the expansion of the fuel stabilization fund. Currently, fuels are exempt from certain taxes. Graham suggested that this exemption was too costly and should be eliminated. Note, that the government is under pressure from transportation sectors. A cargo truck strike began today, after the government and truckers failed to reach an agreement after three days of negotiations.