Banxico raised the policy rate by 75 bps to 7.75% in a unanimous decision, June 23 (chart 1). While the market was split between 50 and 75 bps a few weeks ago, after the Fed's 75 bps rate hike on June 14, all 27 economists surveyed by Bloomberg anticipated a 75 bps move. The rate hike is a first: Since January 2008, when Banxico began using an overnight rate target as its primary mechanism for implementing monetary policy, it had not delivered a 75 bps hike. We had only seen moves of this magnitude during the 2009 crisis, when the central bank made three consecutive 75 bps cuts. 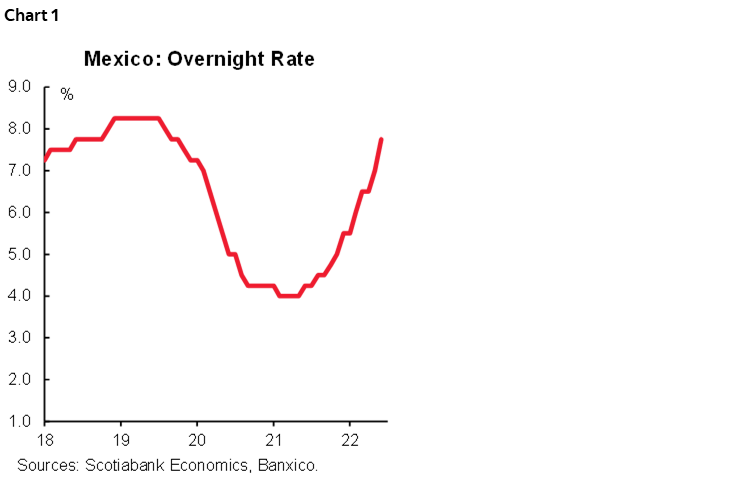 The central bank also once again revised upward its inflation forecasts: in their new scenario, which includes revisions of up to 120 bps higher, inflation peaks at 8.1% in 2022 Q3 before gradually converging to 3.1% by 2024 Q1 (chart 2, chart 3). In our view, conditions warranted a decisive move. Given that inflation continues to accelerate (despite the inflation control package and gasoline subsidy), some sectors of the economy are operating beyond pre-pandemic capacity levels, and the Fed's commitment to bring inflation to the 2% target (following Powell's speech to the Senate Banking Committee), we see room for more hikes of at least 50 bps and do not rule out another 75 bps increase (especially after Banxico mentioned in the statement that they "will evaluate taking the same forceful measures"). For now, we expect the central bank to take the rate to 10% by the end of 2022 and expect it to remain at that level until the end of 2023. As we anticipate that inflation will be durable, with some "sources" of inflation less responsive to central bank policy tightening (i.e., price pressures from supply-side shocks), Banxico and other central banks will have to continue to demonstrate a commitment to do "whatever it takes" to return inflation to target.

On Thursday, June 23, the central bank (BCCh) released the minutes of its monetary policy meeting held on June 7, in which it increased the reference rate by 75 bps, to 9%. According to the Board's analysis, the drop in economic activity was moderate, driven by the fall in investment and a gradual slowdown in private consumption below that expected by the central bank in its previous base scenario. At the same time, board members recognized that the prospects for economic activity point to a significant weakening in the coming months. With regard to the external scenario, the Board pointed to the risk of a recession in the world's largest economies accompanied by a liquidity crisis resulting from an increased probability of a more accelerated withdrawal of monetary stimulus to contain inflationary pressures in those countries.

In this context, the Board considered that the current monetary policy rate is close to its terminal level in this cycle. Although the decision was to increase by 75 bps, the Board of Directors  considered increasing the reference rate by 100 bps, an alternative that had drawbacks, such as less flexibility for future decisions, mainly because it had to incorporate a neutral bias. Board members viewed a 75 bps hike as more appropriate, since it was both in line with market expectations and left room for future increases of lesser magnitude.

In light of the recent depreciation of the CLP, in our view, the central bank is likely to probably move faster than expected in raising rates at the next monetary policy meeting to be held on July 12-13. Looking further ahead, cuts in the monetary policy rate should begin as soon as inflation starts to ease, which is highly conditional on the external scenario, the exchange rate, and to a lesser extent on the output gap. Absent additional supply chain disruptions, further increases in global food prices, and/or multilateral depreciation of the CLP, the first cut could take place in the December 2022 meeting.