ON DECK FOR THURSDAY, JUNE 30

Risk-off sentiment is sweeping through asset classes this morning. That’s despite generally constructive overnight releases with any month-end effects thankfully waving goodbye to June. US and Canadian equity futures are down by about 1½% while European cash markets are down by either side of 2%. Only mainland China bucked the trend toward overnight selling across Asian markets. Sovereign bond yields are falling everywhere with bunds leading and Canada’s curve relatively underperforming ahead of GDP. The USD is somewhat firmer alongside a rallying yen and relative strength across other Asia-Pacific crosses that is offsetting softening European crosses.

China’s composite (54.1, 48.4 prior, no consensus) and non-manufacturing PMIs (54.7, 50.5 consensus, 47.8 prior) rose much more than expected to the highest readings since May 2021 (chart 1). Xi Jinping’s tough talk through the state-controlled press and before the nation runs counter to the actions to relax restrictions and fits the narrative of easing with an eye on his third term this October. The manufacturing PMI was in line with expectations (50.2, 49.6 prior, 50.5 consensus) and so it was the non-manufacturing print that drove the composite PMI up to 54.1 from 48.4. 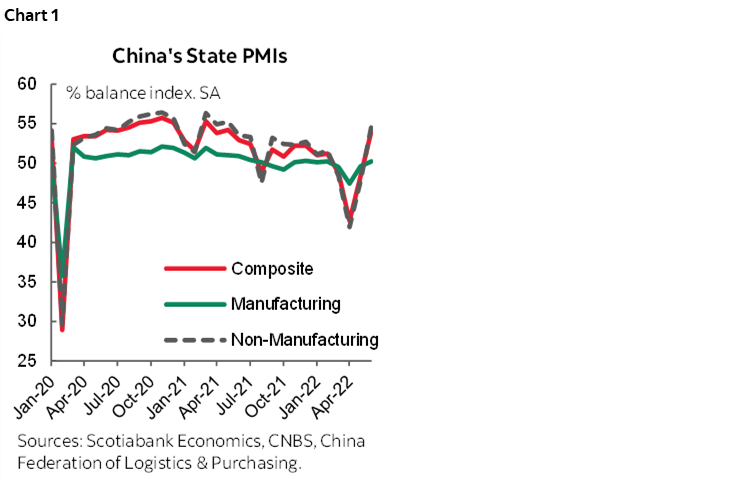 French inflation was strong but a tick beneath the consensus estimate at 0.8% m/m while the y/y EU-harmonized measure landed on the screws at 6.5% (5.8% prior). So far, it’s just Spain that vastly exceeded expectations as Germany also landed a bit softer than expected. Italy is still on tap but arrives at the same time as the Eurozone figures tomorrow morning.

Asian factories were apparently reeling in May. Japanese industrial output was crushed (-7.2% m/m, -0.3% consensus) which follows the prior month’s 1.5% drop and sets the level of output at its lowest since August 2020. South Korean factories fared better, but the 0.1% m/m rise in output during May fell shy of consensus (+0.5%) after a 3.3% prior drop.

European consumer spending was a touch better in May. German retail sales volumes were in line with expectations at 0.6% m/m (0.5% consensus) but that’s a mild improvement after the prior month’s 5.4% plunge. French nominal consumer spending was in the ballpark of expectations net of revisions as it was up 0.7% m/m in May (consensus 0.2%) but the prior month was revised down to -0.7% (from -0.4%).

The Riksbank hiked 50bps to 0.75% as expected. Guidance included a faster pace of QT over 2022H2 than at the prior decision in April. Forward rate guidance was revised up but not by as much as priced by markets. The Riksbank guided that the policy rate would average 1.36% in Q4 and then 1.9% by 2023Q2 which is roughly the peak rate forecast through 2025. It also guided that “it was prepared to raise the policy rate faster if needed to ensure that inflation is returned to the target.”

On tap into the N.A. session will be three main things.

1. US PCE inflation (8:30amET): This should basically follow the already known CPI print higher with a little less mustard (chart 2). A headline rise of about 0.7% m/m with core up 0.4% m/m is expected. The same batch of figures should show a mild services-led consumption gain and decent lift to incomes, both of which are likely to be negative in real terms. 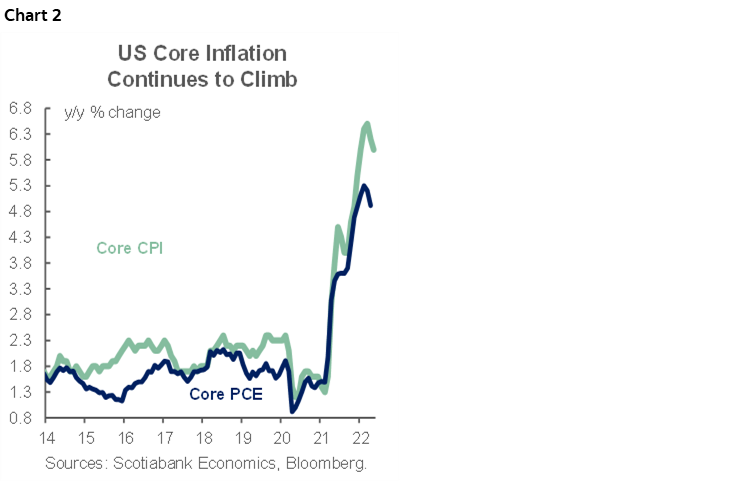 2. Canadian GDP (8:30amET): Statcan’s initial advance estimate was for a 0.2% m/m rise in April which will be finalized/revised. We’ll also get the first estimate for May which I think will remain on the plus side. The combined effects will inform Q2 GDP growth estimates. See the tracking and explanations in the global week ahead Cdn section.

4. Canadian fixed income markets shut early (1pmET) ahead of the Canada Day weekend. Tomorrow will see the US do likewise ahead of the US long weekend. So, barring any surprises, Cdn bonds are likely to pretty quiet shortly after today’s data through Tuesday.

I’ll put out the Global Week Ahead by late today. 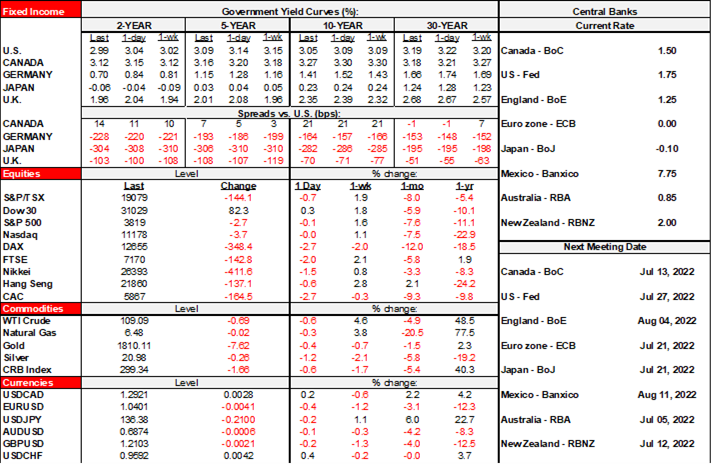