ON DECK FOR TUESDAY, JUNE 28

Markets were in more of a risk-on mode again this morning until US consumers frowned upon the world while doing something different by way of actions. The S&P500 was up before US consumer confidence but sank in the immediate aftermath of a disappointment (see below). European cash markets are up by between about ¾% and over 1%, and Asian equities rallied across all major markets. Sovereign bond yields are pushing higher and led by EGBs and gilts especially at the front end as mildly cheaper US Ts are outperforming; so are Canadas, although largely at the front-end. The USD is firmer, but CAD is holding its own along with the A$ on the China trade as the yen weakened.

China invoked further easing of its draconian Covid Zero policies by reducing the travel quarantine period by half to 10 days, seven of which in basically a detention facility and the other three at home. Let’s not get carried away here, but the symbolism is pointed toward continued willingness to relax restrictions which must be put in the proper political context. The move follows the announcement that Beijing and Shanghai had no new Covid cases yesterday for the first time in four months and there were only 22 (reported) cases nationwide. Officials did a victory lap saying their Covid Zero policies have been “completely correct.” I hope they’re right but see plenty of room for disagreement. Too bad they didn’t substitute toward superior vaccines while relying upon extraordinary restrictions. Regardless, one hopes this is not a premature declaration of victory as BA.4/5 Covid cases pile up elsewhere in Europe etc and an obvious risk is whether relaxing restrictions may import cases into China over coming weeks and months. If so, then China may regret such strident words and at an awkward moment on the path to President Xi Jinping’s quest for a third 5-year term in October unless the date changes; in reality, it’s pretty much a slam dunk anyway given no opposition and after the CCP eliminated lifetime limits last year. Xi Jinping had to look tough on Covid this time after the initial stages of the pandemic. Going forward I still like the narrative that China accelerates somewhat as a partial offset to decelerating US growth from a world GDP and commodities standpoint, but there are high risks around that view.

Euro volatility was driven by mixed headlines from ECB officials. It rallied somewhat when Governing Council Member Kazaks said “front-loading would be a reasonable choice” which seemed to leave the door open—to him at least—to a bigger than 25 move without saying so, and perhaps more than one such move. President Lagarde’s subsequent speech then tamped down the euro when she reaffirmed that they “intend to raise our three key interest rates by 25 basis points at our next meeting on 23 July” after ending APP purchases on July 1st. Her speech also contained no new information on plans to deal with fragmentation beyond what they’ve already indicated by way of flexibly reinvesting PEPP maturities starting this Friday and “to accelerate the completion of the design of a new instrument for consideration by the Governing Council” without compromising sound fiscal policy. ECB Governing Council Member Wunsch followed with remarks against “automatic triggers based on the spreads because the spreads are related to the credibility of fiscal policy” but also reinforced a need to work within legal limits if spread moves across the periphery are “clearly unwarranted.” Defining the latter is the key as it comes down to central banks imposing judgement upon bond markets.

Oh just get on with it. ECB talk would sound hawkish if this were a date long before June 28th, 2022. Talking about “frontloading,” as Kazaks did, or indicating willingness to “withdraw accommodation more promptly” if “we were to see higher inflation threatening to de-anchor inflation expectations” as Lagarde did and with breakevens already above target throughout the maturity profile seems rather dated. ECB stimulus remains wildly stimulative given that so far, they’ve really done nothing other than end net bond purchases and talk a lot about what they might do depending on what happens to inflation as inflation has soared to 8.1% y/y with core at 3.8%. Well done. Give yourself raises. The last notable western central bank to get on with hiking.

US consumer confidence fell by a bit more than guessed with negative revisions and landed at 98.7 (consensus 100, prior 106.4 revised to 103.2). Most of that was due to weaker expectations that fell by more than the present situation component. One-year ahead inflation expectations climbed to 8%; funny, they must have looked at last month’s CPI at 8.6% y/y! Well start spinning ‘The End’ by the Doors or some other suitably depressing yodeling. Pack up the lemonade stand. It’s all over. Bah! Actions speak louder than words and from what I see folks are saying one thing and doing another while boarding flights, attending restaurants and bars and re-engaging, sometimes in ways that make me think part of the world has gone mad. But anyway, as chart 1 shows, the Conference Board measure is holding up better than the UofM sentiment gauge. The former is more driven by job markets than the UofM measure that is more volatile and impacted more heavily by cash flow drivers like gas prices and the S&P. UMich has fallen faster and by more than the Conference Board’s measure throughout the pandemic and recently in part because of the speed of increase in energy prices and speed of decline in equities whereas employment and wage gains have held up better so far. Plot UMich with gas prices and it’s nearly a one for one inverse relationship. Yet Chair Powell cited it as cause for his sudden epiphany. He likes epiphanies driven by the latest single indicator reading. Maybe that’s why having studied economics should be mandatory instead of optional at the world’s two biggest central banks! 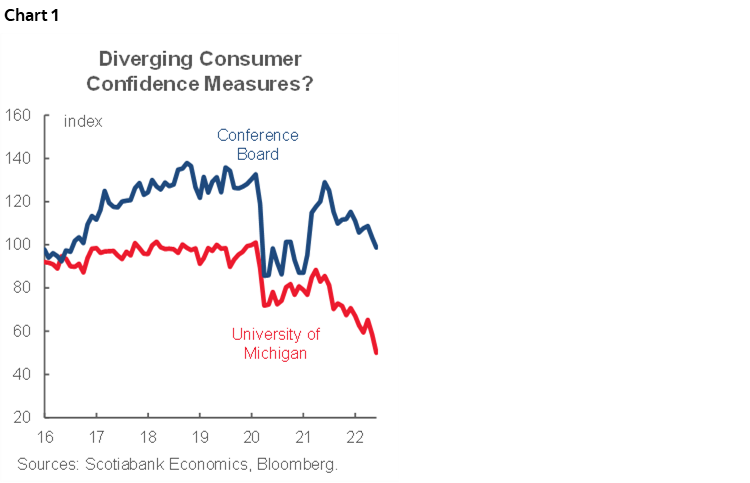 While confidence led the way, the US Richmond Fed’s manufacturing gauge also fell to -19 from -9 previously and adds to negative sentiment into Friday’s ISM-manufacturing reading. 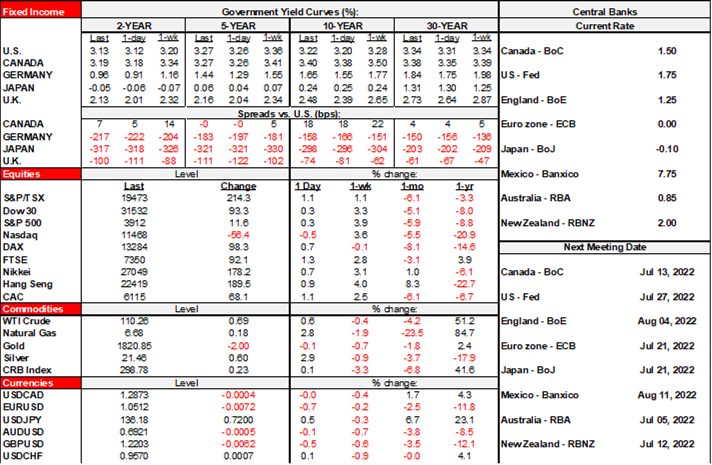