ON DECK FOR WEDNESDAY, JUNE 22

We’ve got all the telltale signs of risk-off sentiment being reflected in unison across asset classes so far this morning. I’m not really sure about any truly fresh catalyst beyond daily noise around recession, no recession, the economy loves us, loves us not.

Anyway, we start the morning with sovereign yields pushing lower and led by gilts (see below). The USD is broadly stronger with even CAD in the middle of the pack ahead of CPI as a sharp decline in oil prices of about $5/barrel is dragging down currencies linked to oil. US and Canadian equity futures are down by over 1% with European cash markets about 1.5–2% lower.

The main focal points into today’s session will be Canadian CPI and BoC speak that will dominate my attention, the first of two days of testimony before Congress by Fed Chair Powell and UK inflation.

UK inflation landed within the realm of guesstimates but core inflation decelerated by a touch more than expected to 5.9% y/y (6.2% prior, 6% consensus) and that’s probably driving the greater decline in 2-year UK yields than the declines elsewhere. This is the first time since last September when UK core CPI missed and so no doubt there are some adaptive swings in the positioning bias at work. Headline inflation was on the mark at 9.1% y/y (9% prior, 9.1% consensus) and 0.7% m/m (0.7% consensus).

Canada updates CPI for May this morning (8:30amET). I’m above consensus again. See the Global Week Ahead’s preview here. I’ve estimated a m/m seasonally unadjusted rise of 1.2–1.3%. Take that and then tack on the inclusion of used vehicles for the first time which Statcan has estimated would add ~0.2ppts y/y and the result is the y/y rate could rise toward 7.8% y/y. I suspect at least some in consensus are forgetting to add StatCan’s used vehicle estimate to the y/y rate given they won’t retroactively incorporate the component when they add it. Drivers include the following: 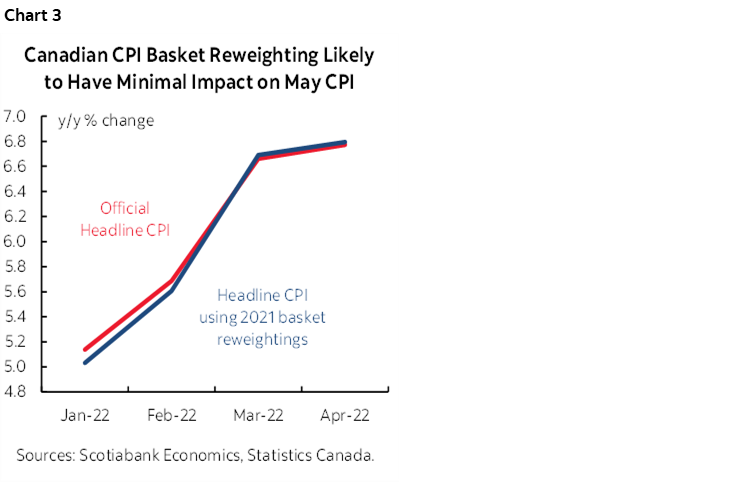 BoC-speak will have a chance to react not long after Canadian CPI. Watch for potential references to 75+ in July, terminal rate, reaction to CPI etc. SDG Rogers will be in a ‘fireside chat’ at the Globe and Mail (10:40amET) and her topic is ‘Growth and Risk—The Future of the Canadian Economy.’ No published remarks, no presser, no webcast, no audience Q&A, probably no fireplace either, just the G&M’s interpretations of what she says. That rather sounds to me like an unusual event! Maybe it’s about tightly managing the messages. Rogers is more of a regs person and strongly adds to the Governing Council’s skillsets, but she came into the role with little known by way of her background in economics or monetary policy and so this may be a chance to address this.

In between the Canadian developments will be Fed Chair Powell’s opening statement (9:30amET) and what is typically tedious testimony before Congress on a range of substantive and tangential issues. I’m not expecting a whole lot of anything new out of this to be honest after the statement, SEP including dots, and Powell’s press conference just last Wednesday. The staff MPR that was released last Friday was a non-event as is typical. Expect more tough talk on combating inflation that we should have been hearing more about much earlier. We’ll hear from other Fed officials as well including Richmond’s Barkin (12pmET), Chicago’s Evans (12:50pmET), and then Philly’s Harker and Barkin again (1:30pmET).

Then at 2pmET today, US President Biden will announce a gas tax holiday until September which is among the dumbest ideas out there in terms of cooling inflation. It’s a transitory one-off effect on relative price for starters. Unless extended, a three-month 18-cent/gallon cut timed for the rest of the summer driving season will then see prices jump again right before the November mid-terms. Retailers could crowd in some of the tax space from an incidence effect standpoint. Even if not, the last thing that’s needed to fight inflation is to give folks relatively more money to spend on other hot items in the basket.

US energy policy in general is in a total shambles under Biden. Treasury Secretary Yellen’s part in Monday’s Dems-Libs confab in Canada was further manifestation of this point. She said that approving Keystone XL would not address short-term energy challenges. Well, it might have had you not repealed the permit!! Outgoing Alberta Premier Kenney had said even as recently as March of this year that Keystone could be finished by early 2023 and so contrary to Yellen’s assertion, it would have been a shorter-term solution. Instead, Yellen claims that oil price caps and gas-tax holidays are sensible ideas. This logic follows efforts toward taxing energy company profits. In the meantime, Biden is off begging Venezuela’s Maduro and MBS for more oil and the US continues to snub its peaceful, friendly, northern democratic ally. 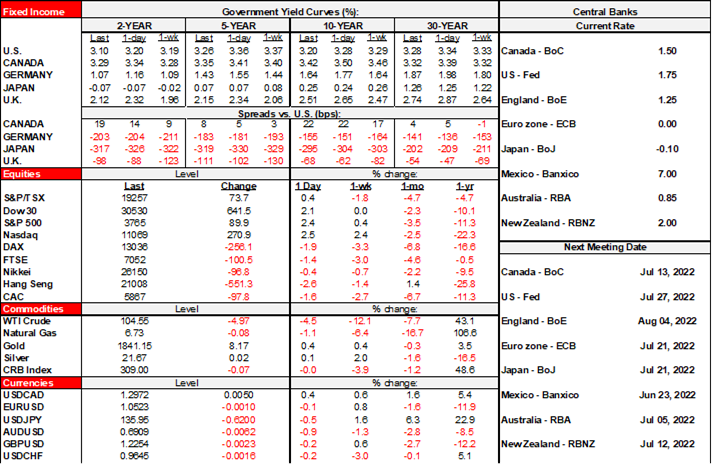