ON DECK FOR MONDAY, JUNE 20

Please see the Global Week Ahead here. Since published on Friday evening we’ve had the French and Colombian election results (see below), but most of the week’s major developments are still ahead. Key topics include:

A light calendar and the fact that US markets are shut for the second annual Juneteenth holiday is offering a fairly subdued start to a fresh trading week. N.A. equity futures are higher by about ½% to ¾%. European cash equities are up by as much as 1% in London and Spain. That followed a generally soft tone across Asian equities. With Treasury trading shut, mild moves across sovereign bonds position about a 6–7bps cheapening in gilts as the main stand-out. The USD is a touch softer.

Colombia’s election was won by the narrowest of margins as left-wing candidate Gustavo Petro took 50.4% of the vote. Markets will weigh his ambitious plans against the fact he lacks a majority in Congress, but we’ll have to wait until tomorrow for market reaction given that today is a holiday in Colombia. I’ll leave further views to Scotia’s large LatAm research team to stickhandle.

Macron’s loss of his Parliamentary majority may be behind mildly wider French spreads over bunds toward the longer end. Macron’s allies won only 245 seats and hence well shy of the 289 required for a majority. The left-wing coalition Nupes was next at 131 seats followed by 89 seats for the National Rally and 61 for center-right allies. While aspects of his reforms may be jeopardized, the clear message from voters in France, Canada last Fall and soon the US come November is more tilted toward applying checks against the center-left political ambitions within major economies.

The PBoC left its 1- and 5-year Loan Prime Rates unchanged overnight as most had expected.

Notwithstanding the US holiday, St. Louis Fed President Bullard speaks this afternoon on inflation and rates (12:45pmET). Canada's calendar is dead quiet with nothing useful to consider while markets will be more subdued given the US holiday. 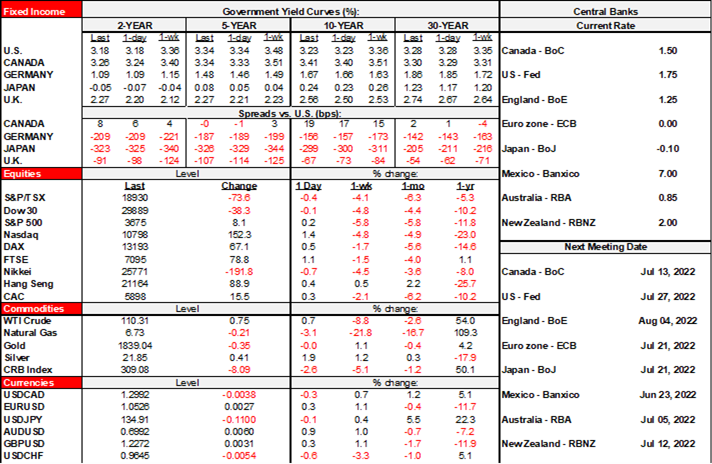