ON DECK FOR TUESDAY, SEPTEMBER 7

We’re coming back to steeper curves to kick off a shortened week this side of the pond. 10-year sovereign yields are up by 3–6bps across N.A. and Europe. Stocks are little changed on average with European exchanges flat to slightly lower, US futures flat and Toronto futures up a touch. The USD is very slightly softer with the stand-out mover being the A$ that initially gained post-RBA only to lead depreciating crosses once the full set of decisions had been considered.

Some of the optimism that may be behind steeper yield curves may be driven by nascent evidence of improving trends in new COVID-19 cases in several major markets. See the accompanying set of global charts for new cases per capita. They are tentatively pulling off the peak in the US and doing so across all Census regions. Canada’s cases are still rising, albeit at a per capita rate that is only about one-quarter of the US rate. Europe is mixed with the UK still trending back up and the rest of Europe either little changed or trending lower. Latin American cases are pushing sharply lower. Across Asia-Pacific, Japan is starting to see a decline in new cases. Finally, Israel’s soaring cases may also be starting to turn lower. 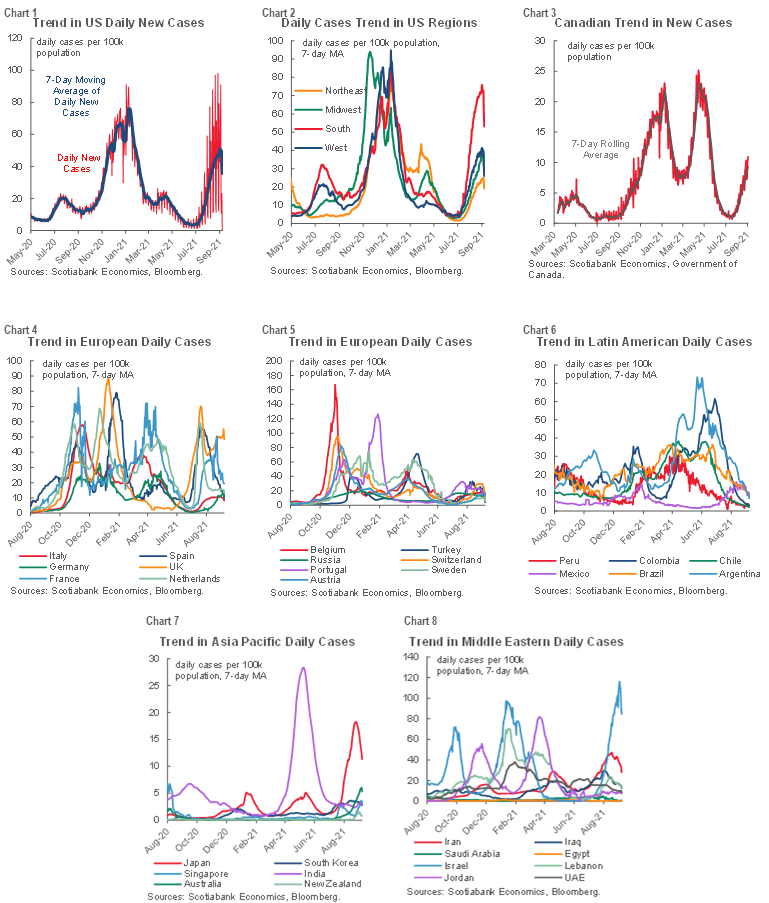 Here come the pandemic levies! A major debate has been whether governments would be tackling their pandemic bills by soaking folks with tax increases. Enter the UK where PM Johnson said this morning “It would be wrong for me to say we can pay for this recovery without taking the difficult and responsible decisions for how we finance it.” Johnson announced a 1.25% tax on incomes including dividends to cover health costs. Expect other jurisdictions to follow and I’m surprised this issue hasn’t received more play in the Canadian election campaign, though it should be near the top of the list of issues addressed in the televised leaders debates this week.

The RBA struck a balance that left the rates curve largely unchanged overnight. There had been uncertainty toward whether they would carry through on plans to implement tapered bond purchases from A$5B/week to $4b/week this month, but in the end they did so. Governor Lowe’s quote shortly after the last decision in August set a high bar for deviating from plans to taper but speculation had risen since along with COVID cases. At the same time, the RBA extended the length of time they will make these purchases from previously saying they would last until ‘at least mid November’ when a fuller review of the purchases was to have been undertaken, to now saying ‘at least mid February 2022.” The trade-off in terms of underlying rationale was that the Delta virus and its public health measures created more uncertainty but the RBA was inclined to look through this as a transitory hit to growth with positive momentum expected to be restored in Q4.

German ZEW investor sentiment—one of the three main sentiment readings that informs growth tracking—increased a couple of points in terms of the present situation but expectations fell by about 14 points. Expectations have been declining since May and are at their lowest since March 2020, albeit much higher than back then when the pandemic burst open.

Former BoC Governor Poloz speaks on the post-pandemic policy challenges at 1pmET. It’s rather unusual for a former official to speak the day before a decision when the central bank is in blackout from last Wednesday until the end of tomorrow. Maybe the way to reconcile this lies in the likelihood he won’t say anything of material consequence to nearer term policy considerations. I would expect a spirited defence of the programs he put in place before Macklem took over and he has previously sounded optimistic on productivity growth.

There is nothing else out on the US or Canadian calendars today. 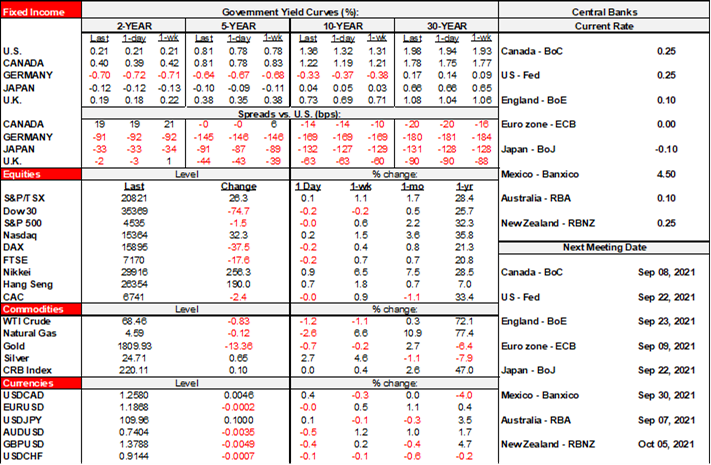