ON DECK FOR FRIDAY, SEPTEMBER 3

It’s all nonfarm to end the week and transition to long weekends in the US and Canada. Markets are behaving about as one would expect in anticipation of the figures. Also recall there is an early close at 1pmET for the Canadian bond markets today ahead of the Canadian long weekend. There is no early bond close in the US ahead of its long weekend or in stock markets (at least officially...).

Overnight releases were mostly soft and focused on a blend of new and revised estimates for PMIs. Japan will need to pick its 36th prime minister since WWII after Liberal Democratic Party PM Suga quit overnight after only a year on the job and ahead of elections that must be held by November 28th. He said he quit due to his inability to control COVID-19 cases. The first leaders debate in Canada was a snoozer last night.

Four out of five sets of global PMIs were softer either on first or second prints as follows:

US payrolls arrive at 8:30amET ahead of ISM-services (10amET) that will likely get lost in the shuffle behind payrolls. Consensus is at 725k (Scotia 625k). 64 out of 67 estimates expect a lower number than the prior month’s 943k with the bulk of the range between about 500k–850k. See yesterday morning’s note for a fuller explanation of drivers (here) as well as the earlier Global Week Ahead.

A nonfarm number anywhere close to consensus, like around half a buck and up, should easily reinforce ‘this year’ taper guidance by reducing the number of folks who still don’t have jobs but had them in February 2020 to just over 5 million and thereby recapturing 16.7 million of the lost jobs. A half million or so and up would tick the box for ‘substantial further progress’ but with further progress requiring that the Fed hangs out well below neutral on the policy rate and still buys lots of bonds for quite a while yet at least the way Powell sees things.

This print also clearly won’t settle the Delta variant resilience debate, given hiring and acceptance lags, but will contribute to it. Nonfarm may fully react with a lag, but it tends to react rather quickly to sudden shocks. 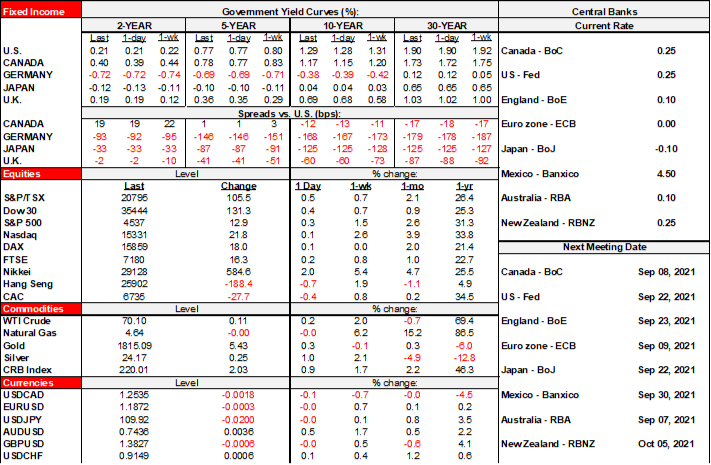