ON DECK FOR WEDNESDAY, SEPTEMBER 15

Either it was priced or viewed as transitory, but either way, China’s greater than expected weakness is largely being shaken off by world markets this morning. Higher beta crosses are gaining on broad USD weakness. Sovereign curves are mixed with the gilts front-end underperforming others, but not by much post-CPI. The US longer end is outperforming the most, but again not by much. Stocks? Well, N.A. futures are slightly higher, with European exchanges little changed in London and Frankfurt by a touch lower elsewhere. HK and Tokyo fell the most overnight while mainland China barely reacted.

Faster than guesstimated UK inflation drove a mild market reaction with sterling slightly appreciating, yet not outperforming other crosses to the USD, while the two-year gilt yield ticked up a basis point. Big deal. Core inflation climbed to 3.1% y/y (2.9% consensus, 1.8% prior) with headline jumping to 3.2% y/y (2.9% consensus, 2.0% prior). Going over 3% means Governor Bailey must write an explanatory letter to Chancellor Sunak which the BoE’s forecast was expecting anyway at some point before year-end and the BoE thinks much of the inflationary pressure is transitory. The broad drivers were in line with what was expected as year-ago base effects including the influence of sales tax and voucher programs plus a strong reopening impulse in August over July drove the gains. Had the only thing that changed been the reference point a year-ago then headline inflation would have risen by a half point to 2.5% y/y so the other seven-tenths acceleration was driven by incremental price pressures. The month-ago inflation rates overshot expectations at 0.7% m/m (0.5% consensus) for headline and likewise for core.

China’s economy slowed by more than expected last month and mainly on the consumer side as COVID-19 restrictions drove weaker spending. Retail sales were up only 2.5% y/y (7% consensus) which takes us back to the weakest reading since last August. Base effects should have been a solid driver which makes the reading even worse. Industrial output disappointed by less, rising 5.3% y/y (5.8% consensus).

Will today’s Canadian CPI follow yesterday’s US CPI refresh with a downside surprise (8:30amET)? The drop in the Canada 2-year yield that shed about 2bps post US CPI and the dip in CAD relative to multiple non-USD crosses suggests markets may be positioned that way.

Never say never, but I think the drivers are distinct and here’s why.

1. For one thing, expectations are already set somewhat modestly into today. I’m at 0.2% m/m NSA and there is typically little seasonal effect in August during ‘normal’ times so the seasonally adjusted reading could be similar. I’m also at 4.1% y/y, up from 3.7% prior. The consensus median is at 0.1% m/m NSA and 3.9% y/y. See the week ahead for drivers.

2. The Delta variant has been a much bigger deal in the US. During August, the US averaged about 8 times as many new COVID-19 cases per capita as Canada averaged (chart 1). Over the back half of August this ratio was still about 6–1 and now it’s about just over 4-to-one. Canada’s cases also started to pick up later than in the US. Maybe that’s because of a higher vaccination rate and/or more antibodies because Canada had a third wave that the US previously skipped (but the US had a bigger second wave). So, we might not see the same magnitude of issues for the high contact service sector issues and their prices as the US did last month.

3. Recall that Canada was reopening partially in June but especially in July and August. That’s unlike the US that that had more reopening momentum earlier and didn’t have the lockdowns Canada had in April and May. So, maybe Canada’s reopening price surge will be timed differently and last longer.

4. There is some evidence for this. Open Table restaurant reservations were getting a touch softer in the US over August. Not so in Canada that kept climbing (chart 2), although September seems to be softening somewhat. You saw this at restaurants and patios. Airfare CPI did not experience any reopening-fed gains into the August numbers as airfare CPI fell 0.3% m/m in July, 5.2% in June, 3.5% in May and so as the sector opened up and line-ups built perhaps airfare is a lift to Canadian CPI by contrast to the US.

5. Canada reopened its borders to vaccinated Americans after August 9th and then to all on September 7th. More cross border traffic by vehicles and planes might have lifted hotel, airfare and restaurant pricing in Canada.

Canada will also update existing home sales for August this morning (9amET) but even absent CPI the report typically gets ignored by markets while nevertheless informing housing observers.

US releases will be minor today including the Empire manufacturing gauge at 8:30amET that kicks off another march to the next ISM-manufacturing print, plus industrial output for August (9:15amET) that should showcase how the supply side continues to struggle to catch up to demand with an expected 0.5% m/m rise. 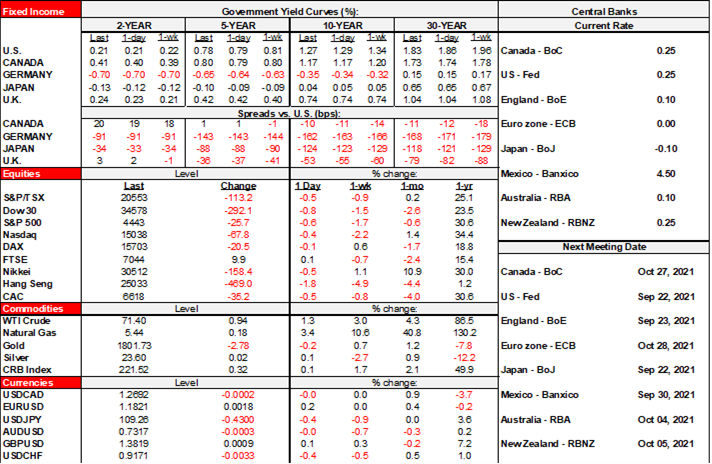