ON DECK FOR TUESDAY, SEPTEMBER 14

US inflation figures will be the dominant focus, with a few regional gems also attracting interest overnight. Into CPI, the US curve is very slightly steeper but the outlier move is in gilts following job figures and ahead of Bailey. The whole gilts curve is up by 3–4bps in yield. Equities are little changed on average with London lower (same reason).

Sterling gained after job market figures were updated. August jobless claims fell by about 59k and the prior month was revised to a bigger decline of 49k from about -8k previously. Claims have fallen for six straight months. The 488k cumulative decline since August 2020 still leaves them 945.6k higher than before the pandemic (chart 1).

Less fresh UK employment figures also picked up (chart 1). Jobs increased by 81k m/m in July which pushed the unemployment rate down a tick to 4.6%. 244k jobs have been gained since the January low with another 716k to go before recouping the pandemic hit.

BoE Governor Bailey will speak at 9amET and may remark on the figures.

The A$ slipped overnight after Governor Lowe’s address pushed back on rate hike pricing in 2022–23. Lowe said “While policy rates might be increased in other countries over this time frame, our wage and inflation experience is quite different.”

As noted in the Global Week Ahead (here), US CPI is expected to rise 0.4% m/m and 5.3% y/y with core up 0.3% m/m and 4.2% y/y (8:30amET). This might be the first print where the year-over-year rate begins to plateau but little comfort should be taken if so (chart 2). Play the upside? Maybe, but that may be a tired bias. Core inflation surprised higher than consensus for three months in a row and then slightly missed in July’s print at 0.3% m/m even when that rate implies core inflation running at about 4% y/y. That means it’s too early to say the inflation overshoot is transitory, and in any event, I still define that as a full-cycle yardstick, not a few months, and we expect the Fed’s preferred core PCE inflation to ride durably above 2% throughout our 2021–23 projection period ending 2023 at about 2½% y/y.

Canada updates manufacturing sales for July this morning (8:30amET). Preliminary guidance pointed to a drop of 1.2% m/m. It will get buried behind US CPI. 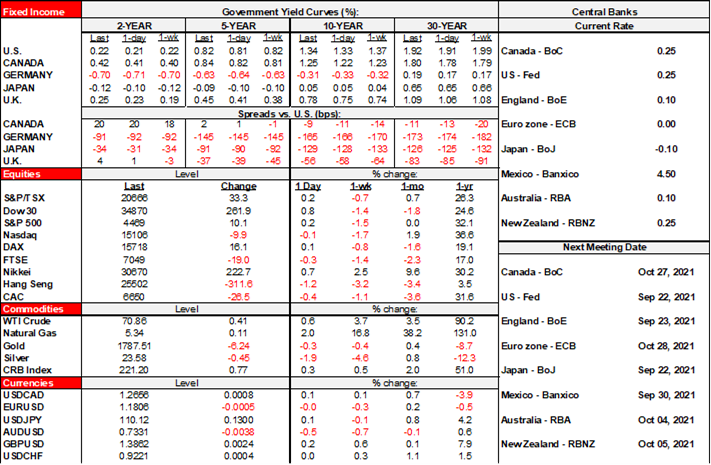