ON DECK FOR FRIDAY, OCTOBER 15

It’s pretty much all about the US to end the week as overnight developments were very light. Curves are generally steeper this morning with 10-year yields up 2–3bps across Europe and the US following curve steepening across key Asia-Pacific markets overnight. Gilts are a modest exception with a parallel upward shift of about 3–4bps through most of the curve and 5bps at the longer end. Stocks are moving higher with most benchmarks up by ~ ¼% to ½% across NA futures and European cash.

The PBOC jawboned confidence in Chinese property developers saying Evergrande’s risks were manageable and China has intensified efforts to approve mortgage flows, but no further tangible measures were offered. Nor were there any hints of policy easing in the nearer term, though we’ll see around Q3 GDP early in the week. I couldn't tell how firmly their fingers (and probably toes...) were crossed while they spoke! Such verbiage is largely useless imo and markets would appear to agree. Chart 1 shows still plunging prices for China’s junk bonds that have fallen below levels around when pandemic fears peaked. Chart 2 offers a reminder of the coupon payments owing by Evergrande; it includes payments that have been missed to date and with approaching 30 day grace periods as well as the additional payments that are forthcoming including one next week. Of course this is just one among many property developers facing challenges.

BoC Governor Macklem’s remarks last evening are motivating bond markets to drive Canadian yields higher this morning with the 2 year yield particularly underperforming the US. Why? I think it’s a positioning argument as the yield fell yesterday afternoon in anticipation of Macklem’s remarks when news struck that he would hold a media roundtable and speculation built that he could use it to lean against aggressive market pricing for the start of rate hikes. To my disappointment, he didn’t do so explicitly, or maybe they need some economists in the room to ask the most pertinent questions! Not doing so was apparently taken by market participants as a signal to reverse the rally that occurred yesterday afternoon.

Regardless, any astute observer of the BoC would have read between the lines and arrived at the conclusion that he’s in no big rush to hike despite pricing in early OIS and BAX futures contracts. Macklem chose the tickle and tease approach to the front-end rather than smacking it with a hammer. It appears there are no plans to release a full transcript of his remarks which is disappointing as a more methodical approach to releasing the comments should be led by the BoC in my view. Piecing together scattered coverage across media outlets that had some wonky differential timing over the 7–8pmET window last evening nevertheless revealed nothing that was terribly unexpected. I took the tone of his remarks on slack, jobs and inflation to confirm that the BoC would be in zero rush to hike relative to what had become aggressive contract pricing in OIS and BAX futures. His remarks seemed to be dovish relative to how soon markets think hike risk may enter the picture.

US retail sales (8:30amET) and Goldman earnings (consensus US$9.92 EPS, 8:30amET) will dominate attention into the end of the week, plus a couple of lesser updates. If the rest of them can beat as has been the case so far, then I’m pretty sure GS will find a way to make more money than estimated.

US retail sales will probably dip at least in terms of headline sales given that we already know new vehicle sales fell by 6.7% m/m in volume terms and only some of this was offset by higher auto prices. Key is whether sales ex-autos can post another gain after the 1.8% lift the prior month. The retail sales control group that feeds into total consumption likely faces downside risk tomorrow.

Miscellaneous updates will include Canada’s update on home sales during September which will shoot for the first gain in six months (9amET). The US also updates the US Empire manufacturing gauge that kicks off another round of regional reports on the path to the next ISM-manufacturing print, as well as UofM consumer sentiment for October (10amET) with limited Fed-speak on the docket (Bullard 11:45amET, Williams 12:20pmET). 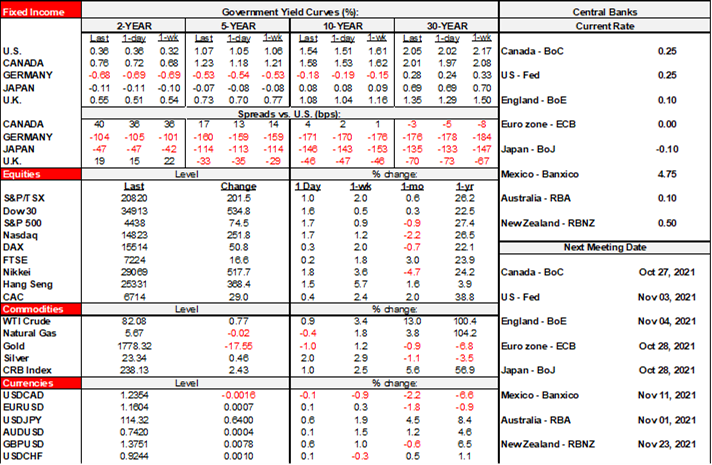