ON DECK FOR TUESDAY, OCTOBER 12

Treasuries are bear flattening a bit with the 2-year yield up 3bps and 10s slightly richer after payrolls and ahead of CPI and earnings this week that all starts on Wednesday. Canada’s curve is following through on Friday’s jobs data with further cheapening across maturities (recap here). Gilts are richer with yields down ~2bps across the curve following yesterday’s jump higher after hawkish BoE remarks over the weekend. Stocks are mixed with N.A. futures little changed to slightly negative and European cash markets down about ½% across most exchanges. This follows weakness in the Asian overnight session with major exchanges down by ¾% to about 1½%. The dollar is little changed.

US markets return after Treasuries were shut for Columbus Day (stocks were open) and will focus on post-nonfarm Fed-speak with irrelevant data (JOLTS August 10amET). Vice Chair Clarida speaks on the US economic outlook and monetary policy at 11:15amET. He’s likely to reaffirm that the Fed is on track to announce tapering at the November meeting after the barely good enough US jobs report. We’ll also hear from Atlanta President Bostic (12:30pmET) and Richmond’s Barkin (6pmET).

Canada returns in food shock today following the Thanksgiving holiday and will be fairly quiet throughout the week with just minor releases due out toward the end of the week.

Sterling and gilts largely ignored UK job market readings this morning in part because they were in the ballpark of expectations and because of forward looking concern over how the job market will respond to the end of the furlough program starting with figures from October onward. UK employment rose by slightly less than expected in August, but not by a meaningful amount. It was up by 235k on a 3 month ago basis (250k consensus). Jobless claims for September fell another 51k and the prior month was revised to a better decline of 88k (from -59k). That dropped the unemployment rate in August to 4.5% which remains about ½% above the pre-pandemic rate (chart 1).

German investor sentiment fell a little more than expected in October. The forward-looking expectations component dipped 4.2 points to its weakest since April 2020 and has fallen every month since May. This is a soft start as the first of the survey-based pieces of evidence on the German economy ahead of PMIs on October 22nd and the IFO business confidence measure on the 25th.

The IMF updates lagging forecasts at 9amET today. Big deal. Consensus-driven and committee-driven, they are usually the last to get the memo on the outlook. 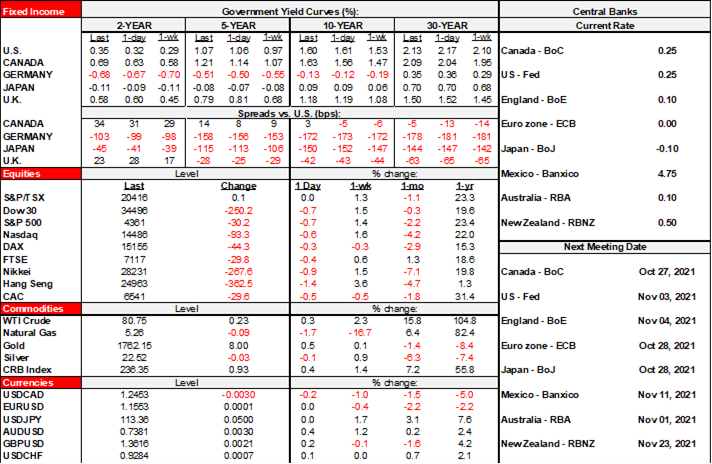