ON DECK FOR FRIDAY, JULY 9

We may be ending the week with a bit of a reversal of recent moves in bonds. The US 10 year yield is up 4–5bps to 1.34% with Canada’s curve performing similar ahead of jobs data while gilts are steepening only slightly less but EGBs are outperforming. The dollar has been slightly depreciating since China’s RRR announcement a little earlier. Stocks are gaining with European cash markets up by about ¾% to 1¾% and N.A. futures up by ¼% – ½% or so except for the flat Nasdaq.

Somewhat curiously after China’s financing figures beat expectations and following a flat core inflation reading, the PBOC cut the required reserve ratios for most banks (excluding those that have implemented a deposit reserve ratio of 5%) by 50bps (chart 1). The move will be effective next Thursday. The statement flagged motivations including rising costs at some firms and supporting the economy.

China’s headline inflation ebbed a touch more than expected in June (+1.1% y/y from 1.3%, consensus 1.2%) but core inflation remained unchanged at 0.9%. Aggregate “social” financing was up 3.67 trillion yuan in June (2.89T consensus) for the strongest gain since the usual burst in January of each year. Yuan denominated loans were up 2.12T yuan (consensus 1.85T). Chart 2 shows that aggregate financing flows so far this year are the second strongest on record, but because they were so strong last year, the growth rate in outstandings has been sharply ebbing this year (chart 3). Chart 4 shows that local currency loan flows are at a record high and so growth in outstandings is relatively stable (chart 5). 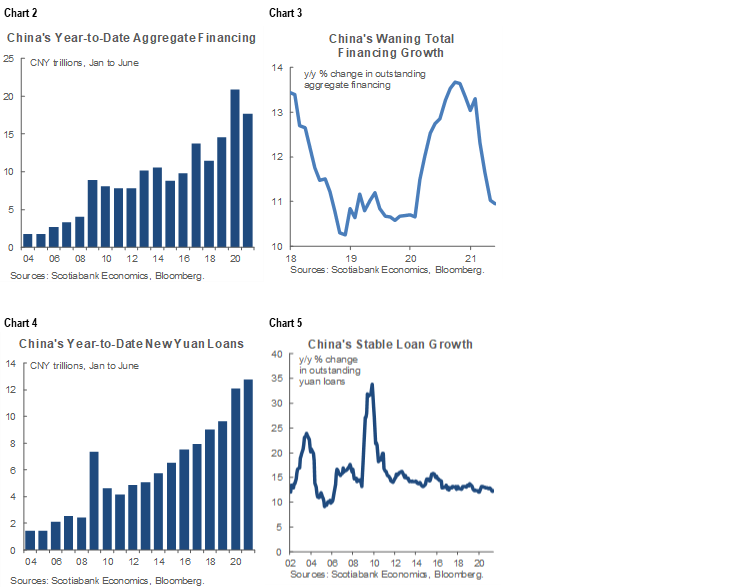 Canada updates job market figures for June this morning (8:30amET). It coincidentally turns out that the guesstimate I submitted a week ago Monday matches the later median consensus figure at 175k but the band of estimates is rather wide. The range cuts from +40k to +285k with a high standard deviation of 77k. LFS has a 95% CI of +/-58k around the survey sample estimate and so a band of nearly 120k conveys the massive and humbling role played by statistical noise in analogous fashion to the US household survey. The point, however, is that there should be a meaningful gain today.

The main driver will be reopening effects as provincial stringency indices fell sharply between the May and June survey reference weeks (here). Most of that easing over that period occurred outside of Ontario that is joining a little later on and so I would expect the composition of gains to reflect that fact. During the June reference week, Quebec’s restrictions fell back to the lowest since last September before the start of the second wave.

Also note that the Ivey PMI registered a further improvement in the employment subindex to the highest not only of the pandemic but in the 21 year history of the survey since 2000 (chart 6). Most of this LFS report will likely be about callback effects as outright job seeking probably picked up later if data on google searches are any indication. Hiring plans across small businesses also continue to pick up.

In a bigger picture sense, Canada has less labour slack than the US and because rising labour costs are outstripping productivity growth the result is that labour market developments are more inflationary in Canada than in the US to date during the pandemic. The BoC is remiss not to be publicly speaking about this issue. Across the pond, we heard BoE Governor Bailey speaking about weak UK productivity this morning and yet in Canada the BoC is silent on the topic.

As evidence, consider the following:

Markets should be paying attention to these dynamics as the feedback effect on inflation is among the factors expected to force the BoC’s hand toward hiking ahead of the Fed unless even more on the FOMC continue to pull forward their own hike guidance into next year from 2023. A fully inclusive job market recovery would be a wonderful thing but we must also talk about productivity when linking job market developments to the BoC’s inflation mandate. 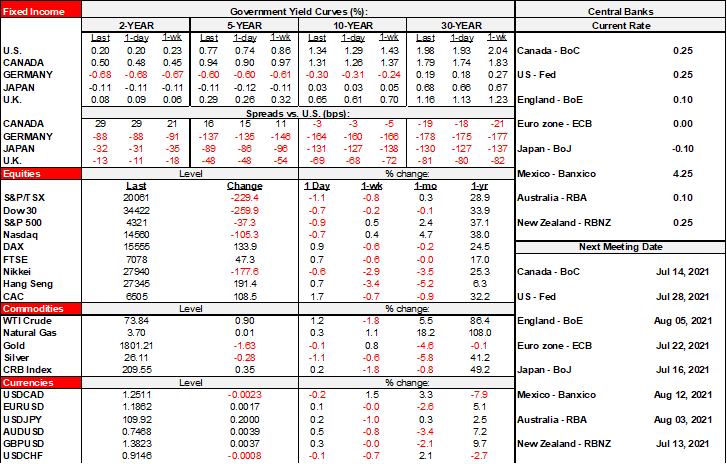