ON DECK FOR WEDNESDAY, JULY 7

The overnight session was a total yawner but the North American session is heating things up for bonds again. Calendar-driven volatility may be focused upon FOMC minutes later today.

US Treasuries were starting off relatively little changed earlier this morning but shortly after 8amET began to fall again. The 10 year T note is down 4–5bps on the day and sits at 1.30% at the time of publishing. Canada 10s are slightly underperforming the rally in US 10s. 10 year EGB yields are rallying by 2–4bps with gilts down 5bps. The USD was flat on the morning until appreciating just before publication. There are mild gains on average across N.A. equity futures and European cash markets with some negative effects on social media accounts given a headline about a Trump lawsuit.

What’s driving bonds? There are various plausible theories but the one I continue to like the most is the argument that there continues to be far too much liquidity pumping into markets and expected to continue doing so in relation to looming debt scarcity around when the US debt ceiling gets reinstated at month-end. That issue may also have the potential to complicate the Fed taper dialogue like in September 2013 when the Fed held off tapering because of similar issues that led to a government shutdown. Bills auctions are being slashed in preparation.

Congress is nowhere near moving toward either suspending the debt ceiling or raising it. As August recess approaches, it may not feel pressure to do so until Congress returns to address the need for a new agreement to fund the US government beyond September 30th. The political divisions may still be far too deep in order to drive bipartisan agreement toward doing anything before they absolutely have to and maybe not until after a nasty bun fight. Into a September timeframe is ballparked for a perfect storm marked by the exhausting ability of the Treasury to fund the government, heightened uncertainty over funding the government beyond the end of the month and an inflexible debt ceiling. The scenario that unfolds involves the material risk of a partial government shutdown and payments prioritization by Treasury as flagged for a while now. Such a scenario would again demonstrate before the whole world the massive dysfunction that dominates American politics and its destabilizing effects on world markets. The country’s role as a reserve currency, however, would perversely have the probable effect of driving Treasury yields lower again like in the 2013 episode among others which is what I think we are observing now. I’m not optimistic around settling any of these issues any time soon given ongoing deep divisions in US politics, but when it eventually settles, we could be setting up a massive cheapening trade for Treasuries with an expedited push toward Fed tapering. In the meantime, partial government shutdowns tend to involve small effects on growth that get recaptured in the next period while everyone else benefits from lower term funding costs. When the US government shut down in 2013 the economy still grew by 3.2% in each of Q3 and Q4. Meh. For now, this is probably market theatre with side benefits to a pathetic and recurring American political soap opera.

By way of refreshed background on the data, chart 1 shows the Fed’s RRP facility that is soaking up a fair amount of this liquidity. Chart 2 shows that there remain hundreds of billions of dollars of excess deposits over and above ~$450B that the Treasury has at the Fed that must be run down in order to comply with Treasury’s interpretation of the debt ceiling legislation. As this runs down, debt issuance is curtailed and then failure to raise the ceiling will put debt issuance on hold indefinitely while the Fed continues to buy US$120 billion of Treasuries ($80B) and MBS ($30B). Chart 3 shows where the debt ceiling may become binding at month-end.

How to fix this? Congress holds the keys. Its inaction on the debt ceiling is already having a very distorting and destabilizing effect on markets while the Fed is simply buying too much. The Fed has other tools at its disposal if it’s uncomfortable with the speed and magnitude of adjustment and distortions in fixed income markets, but they are band-aids when the durable solution lies with Congress. The Fed could raise or eliminate the counter-party RRP limits, raise IOER again

Other considerations are significant but more tangential in my view. Some of the market volatility may be due to positioning ahead of the upcoming US earnings season. Some may be due to OPEC+ dysfunction and note that energy was the dominant drag on the snp yesterday (-3.2%) indicating stocks could swing violently if OPEC+ gets its act together at some point. Some of it may be due to nearer term concerns about growth if supply chain issues continue to dampen some activity indicators, but I suspect the rotation of the sources of growth toward the distanced activities that are concentrated in services will still drive buoyant conditions ahead. The market may just need to wrap its mind around relatively transitioning away from a goods-driven expansion toward more of a role played by services that data and time will inform. The delta variant is lurking in the background with all eyes on the UK reopening risks as cases continue to climb. Some of the market effects may be month-end transitioning in terms of rebalancing effects with equity valuations being more carefully treated. Further, one always has to leave the door open to the possibility that bond markets undershoot ultimate resting points through pile-on trades.

German industrial output roughly met expectations net of revisions. Output fell 0.3% m/m in May (consensus +0.5%) but the prior month was revised up to a dip of -0.3% (from -1.0%). Still, momentum has been lost as output has fallen in four out of the five months this year. Onto H2….

China floated the possibility of cutting the required reserve ratios on banks early this morning. It has not cut those measures since January of last year in the thick of China’s pandemic (chart 4).

Canada’s Ivey PMI climbed to 71.9 (64.7 prior). It’s an all-economy PMI including the public and private sectors so it’s somewhat tough to read, but employment increased (69.6 from 67), inventories were stable relative to the prior month and price increases accelerated again as yet another inflationary signal.

Russia updates CPI inflation at 12pmET and both the headline and core measures are expected to rise again which may further fan tightening expectations.

Minutes to the incrementally hawkish June 15th–16th FOMC meeting will be the main focus (2pmET). JOLTS job openings for May hit a new all-time record high but really only because the prior month was revised down a touch.

Here is a repeat of the things to watch:

Still, the minutes are going to be slightly stale post-nonfarm’s 850k even with soft details and with 56% of Americans >12 double dosed as of now (64% one dose). Further, returning to the start of this note, the discussion on tapering could well be vulnerable to being disrupted by debt ceiling issues just like in 2013. 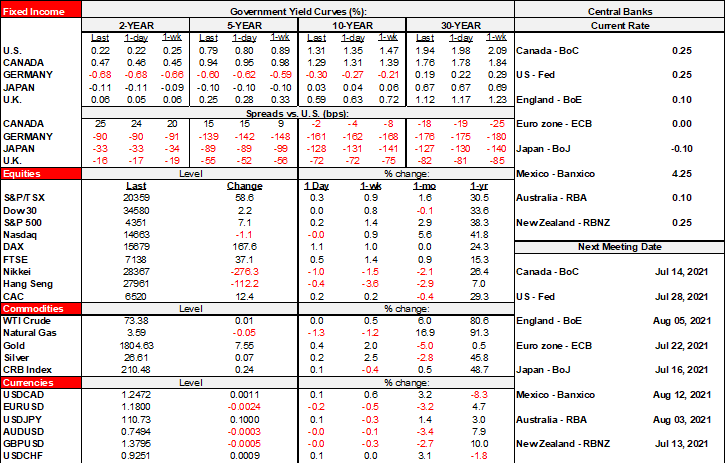