ON DECK FOR FRIDAY, JULY 16

There was little by way of market moving developments overnight and today’s main focus will be upon the state of the US consumer.

As far as markets go, one day it’s flatter. Then steeper. Flatter. Steeper. Flatter. Today the US Ts curve is a little steeper again with a bit of an assist from strong retail sales figures. US 10s are up 3bps and 2s are up 2bps. We’re just oscillating around a tight range driven predominantly by far too much liquidity sloshing around in anticipation of scarcity issues driven by the likelihood of no resolution of the debt ceiling for quite a while when it gets reinstated at month-end. European 10s are slightly richer, probably with an eye on next week’s ECB meeting that I’ll write about in the week ahead (hint: it won’t matter…). The dollar is little changed. Equities are little changed on average but S&P500 futures popped a bit higher after the US retail figures.

The kiwi dollar got a boost overnight from CPI. Q2 inflation almost doubled consensus at 1.3% q/q (0.7% consensus) which lifted the y/y rate to 3.3% (2.7% consensus). Both rates were the highest in over a decade. That puts inflation well above the 2% target and anticipation of this kind of heat was likely a contributor to the RBNZ’s abruptly more hawkish stance a few days ago. Like elsewhere, it’s not just base effects as NZ has posted between 0.5–1.3% q/q non-annualized CPI gains for 4 quarters. The annualized quarter-over-quarter inflation rates are overshooting the target (chart 1). Breadth was high with 10 of 11 main groups rising.

The BoJ left broad policy unchanged as expected. It slightly raised near-term inflation forecasts and slightly lowered growth for this year but raised next year. It still only sees inflation at 1% two years out which continues oh let’s see about 3 decades of that narrative. The BoJ introduced some green plans like 0% one-year loans to banks with unlimited rollover if they lend to, well, something that looks green…and indicated it will buy green bonds denominated in foreign currencies (but is not buying Japanese green bonds). The amount of reserves affected by the negative policy balance rate was also reduced. None of this is likely to be of material consequence to market participants.

Against expectations for a decline (because we knew autos were down sharply and were uncertain about reopening effects given the prior months’ disappointment), retail sales actually surprised higher in June and posted a gain of 0.6% m/m and 1.3% m/m ex-autos. Autos did drag it down as expected, but the rest of the report showed a rebound effect unlike the prior month.

US retail sales posted a nice beat on the headline readings and roughly met expectations for the control group after taking into account all revisions. The trend remains very, very strong. The retail sales control group feeds into consumption in GDP and excludes building materials, autos and gasoline and it was up 29% at an annualized q/q rate in Q1 and then another 14% in Q2. That points to a strong US consumer spending contribution to GDP growth. Total retail sales were up 36% q/q SAAR in Q1 and 27% in Q2 (as a reminder, SAAR is seasonally adjusted at annualized rate). See chart 2.

The US consumer is ripping along. There is a lot of noise and choppy data with all of the supply chain and stimulus distortions that come and go, but the trend is unambiguously very strong.

Breadth was solid. See chart 3 for the breakdown of growth in June by retail category and chart 4 does the same thing in weighted contribution terms. The US has achieved a full retail recovery (chart 5) but with still uneven effects (chart 6). Still, it’s noteworthy that all retail categories are now higher than they were in February 2020 just before the pandemic. 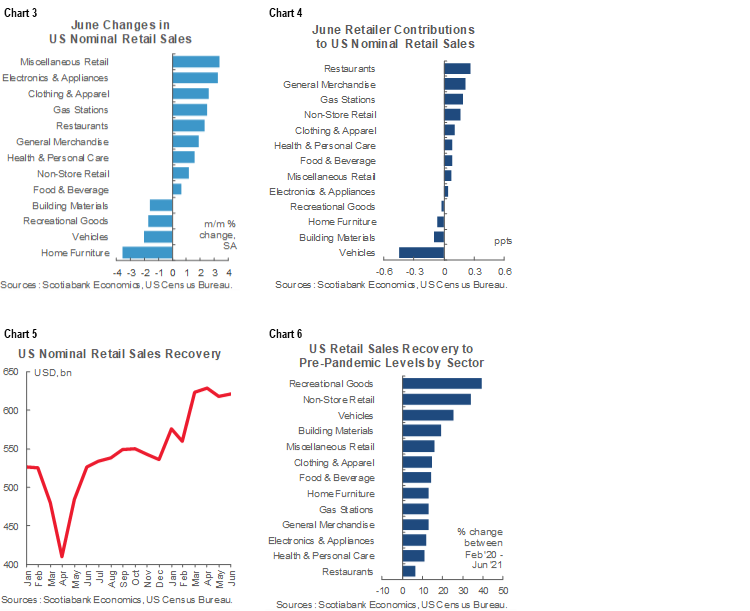 Starting about now, American parents are getting the extra $300/child/mth child benefit payments on a monthly basis instead of waiting until tax filing season as per President Biden's change. That’s similar to what Canada’s Trudeau administration did a few years ago with the large spike in child benefit payments that Canadians largely spent. Back then, Canada got a surge in retail sales and then flopped on pulled forward effects. We'll see about the US experience, but I think the US consumer is in better shape than the Canadian consumer was back then and is now with a record low debt service burden, still high saving rate, strong wealth effects, a solid jobs recovery underway and tighter than often realized labour markets driving growing evidence of wage pressures with a full services recovery still ahead.

Canadian housing starts are still going strong. 282k new homes were placed under construction last month (consensus 270k) which was little changed from the prior month’s upwardly revised tally (286k, up from 276k). Robot-written Bloomberg headlines said starts fell which I guess technically they did, but a human would look at that and think that overall they were a little stronger than expected for June and then be sure to include the positive revisions for an overall net beat to expectations. The surge of new supply through the pandemic continues (chart 8). 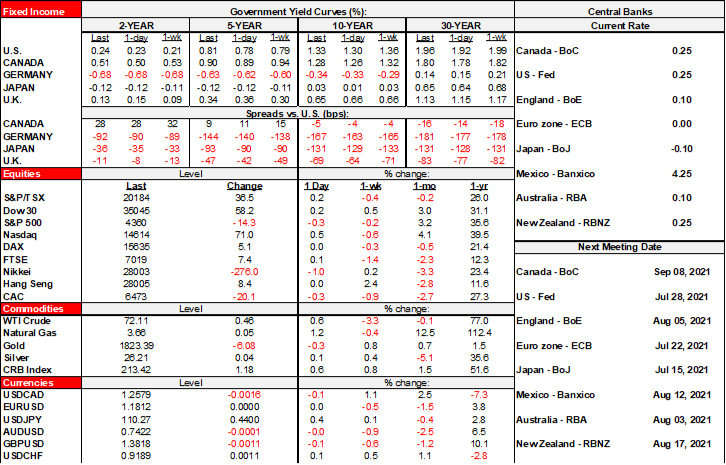