ON DECK FOR THURSDAY, JULY 15

Markets are in a bit of a risk-off frame of mind so far. Equities are soft with the S&P down ¼%, the TSX up ¼% and European cash markets all generally down by about 1%. The US curve was flattening but 10s are cheapening in the wake of comments by tFed Chair Powell that tapering is under “active consideration.” There is no follow-through on the Canadian curve to yesterday’s BoC decisions. Gilts are underperforming especially at the front-end with the 2-year yield up 7bps on the day and 10s up 4bps as BoE comments added to exit bets. Most EGB 10s are flat except Italy’s slight widening over bunds. Oil is down by about 1% across WTI and Brent.

Take your pick of favourite theories for flattening. Mine remains debt ceiling related scarcity and liquidity issues combined with rising concern that the Fed is going to wait too long to tighten and ultimately risk tossing the economy into the recycling bin when it finally acts which would be a replay of multiple past policy errors. That's not a forgone conclusion, but risks continue to build imo. There is zero need for $120B/month of Fed purchases. They should have already tapered which is where I side with Bullard’s comments this morning. The problem is that cycle after cycle, the Fed waits too long to change its mind and by the time it achieves committee consensus it goes too far in the opposite direction and both the economy pays a price. I like the outlook this year and next, but I worry that the biggest risk to the medium term picture is a presently very slow-footed Fed if it’s not already getting too late.

Overnight developments were focused upon hawkish BoE talk, soft Chinese growth and encouraging Australian jobs. There should be little incremental calendar risk on tap today in the US and Canada.

Sterling and gilts have been on a bit of a wild ride this morning. First, mixed jobs data drove sterling a little softer when only 6k jobs were added in May over April and only 25k on the rolling 3 month ago convention (91k consensus). Chart 3 shows UK employment over time while chart 4 shows the composition of job changes over time. An offset was that jobless claims plunged by 115k in June and the prior month was revised to a bigger drop of 151k from -93k. I’d personally emphasize claims as the fresher data and they are falling by record amounts.

Earlier this morning BoE MPC member Michael Saunders rattled gilts and sterling with hawkish comments. He argued that if the economy and inflation continue to perform in line with recent trends and risks don’t materially rise, then “options might include curtailing the current asset purchase program—ending it in the next month or two and before the full £150 billion has been purchased—and/or further monetary policy action next year.” That follows yesterday’s remarks by fellow MPC member Ramsden who said he leaned more strongly toward an inflationary scenario being sustained at levels below near-term peaks than the weight he places on a more disinflationary scenario. Chart 1 on the front page shows the evolution of the implied rate path.

Personally, I’d be more comfortable with where the BoE may head after seeing some evidence on how the UK handles blowing the barn doors open on restrictions after tomorrow in the context of soaring Delta variant cases (chart 2, front page).

Australia gained another 29.1k jobs in June following the prior month’s surge of 115.2k. Given statistical noise, that about matches expectations for 20k. All of it was full-time(+51.6k) as part-time jobs fell. There was little incremental effect on the A$ or curve. Still, this is encouraging for other countries like the US, UK and Canada as they move toward withdrawing labour supports in a couple of months, since Australia’s decision to end Job Keeper wage subsidies had driven a drop in jobs during April from which it has mightily recovered.

Chinese GDP growth remains disappointingly weak. Q2 grew only slightly beat expectations because of rare downward revisions to the prior quarter. China usually gets its GDP figures out with remarkable speed and equally remarkable is the fact it almost never revises them! Q2 growth landed at 5.3% q/q annualized after Q1 grew by just 1.6%. Forget about year-over-year growth rates (7.9%, prior 18.3%) given pandemic distortions as it’s the weak momentum in 2021’s quarter-on-quarter rates that informs growth tracking at the margin. Few other major economies focus upon growth in year-over-year terms anyway. June data was a little better than expected, however, which suggests stronger hand-off momentum into Q3. Retail sales were up 12.1% y/y (10.8% consensus) and industrial output climbed 8.3% (7.9% consensus). Here too, however, we’re dealing with year-ago distortions.

There is nothing material on tap in Canada today with just existing home sales for June to consider. Sales fell 8.4% m/m in June. Wait another month for reopening effects. June’s drop follows a -12.5% decline in April and a -7.4% drop in May, all of which happened during lockdowns and tightened restrictions including banned open houses in parts of the country like Ontario. In addition, there is a lag between relaxed restrictions and the ability to go out and kick some tires with secured pre-approvals. Listings fell in June which indicates soft supply which is probably consistent with not being able to list in the first place! I'd expect a Q3 rebound of sorts but we're kind of in the seasonal dead zone now for the Canadian housing market. We'll have to wait a while for the next big test in the classic spring market which hopefully won't be torpedoed by covid waves and restrictions. For now, fade the evidence as explainable and economic growth will have to rely more upon reopening services, broad consumption and transitioning toward better exports and investment.

As a reminder, please see yesterday’s recap of what the Bank of Canada did here.

So why did the market react the way it did as yields dropped and CAD slipped post-communications despite the BoC doing exactly what Scotia Economics expected? The BoC tapered purchases by $1B to $2B as we expected well ahead of consensus months ago. The base case was for the BoC to leave its output gap framework broadly unchanged which is what they did while not triggering what I had flagged as a risk to this base case that could have involved pulling it forward either now, or in October. Well, October it is likely to be as the higher forecast level of GDP only marginally impacted their output gap framework. Hikes continue to be guided for mid-2022. In all, this was very much in keeping with BoC’s ‘gradual and measured’ (a euphemism for slow-footed?) policy guidance that didn’t rock the boat.

In terms of market reactions, I think a swift reversal of pre-communications positioning is one factor to consider but that shouldn’t be confused with markets thinking the BoC was dovish per se. Canada 10s were cheapening through Tuesday and particularly Wednesday morning ahead of the BoC perhaps on bets that the BoC would come off sounding more hawkish than it did. That doesn’t mean they were dovish, just less hawkish than immediately preceding events might have had market participants expecting. It just means that the BoC didn’t follow the RBNZ’s abrupt ending of purchases and come off sounding more abruptly hawkish themselves especially in the wake of another US inflation surprise the day before. When the BoC didn’t turn incrementally hawkish, position squaring ensued, and then global market factors took over.

But I still think yesterday was just a placeholder and October will probably pose greater risk with the BoC getting behind the curve here. By then, several things may change:

US data releases were relatively minor this morning and focused upon the industrial complex.

US industrial output advanced by 0.4% m/m (0.6% consensus, 0.7% Scotia) which was a little shy of expectations but I’m more concerned about the soft details. Utilities were up 2.7% m/m with mining up 1.4% while manufacturing was little changed at -0.1% m/m. Generally speaking, most manufacturing data is showcasing the supply chain challenges. If one believes this to be a transitory factor from an inflation standpoint, then one should also argue that it's a transitory weight on growth that will pick up as supply chains eventually sort themselves out. Instead, some commentary tries to have its cake and eat it too by saying transitory effects on inflation will dissipate and we’ll still get crappy growth in the aftermath which seems implausible.

That followed a pair of regional Fed manufacturing gauges that offer mixed interpretations of where the next ISM-manufacturing report may land. The Philly Fed’s metric fell by about nine points to 21.9, but the NY Fed’s Empire gauge (here) soared to 43 from 17.4. Philly fell as new orders cooled (17 from 22.2), so did shipments (24.6 from 27.2) and so did unfilled orders (19 from 22.5) while employment was little changed (29.2 from 30.7). Prices paid are still soaring but at a slower pace in the Philly gauge (69.7 from 80.7). That returns us to the April signals for prices after June’s peak. As for the Empire measure, prices paid were a less dovish signal as they only slipped to 76.8 from 79.8 and remain elevated. New orders soared to 33.2 from 16.3, shipments soared to 43.8 from 14.2 and hiring picked up (20.6 from 12.3). Prices paid in the Empire gauge were unchanged at a strongly rising pace (64.6 versus 64 prior).

All of which probably means that services reopening will be relied upon to carry the ball forward as goods sector supply chain issues gradually sort themselves out. Those supply chain bottlenecks are fundamentally caused by excess stimulus that drove a massive demand surge that damaged supply chains were not prepared to handle. The Fed poured kerosene onto the picture and has been surprised by the resulting inflation. 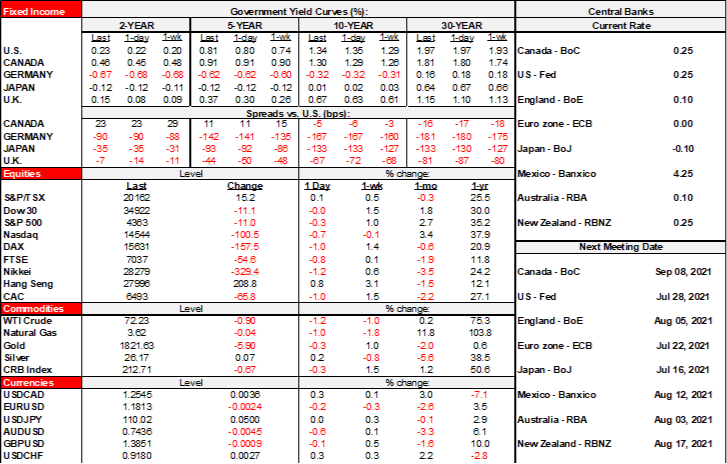