ON DECK FOR WEDNESDAY, JULY 14

Bonds sold off in the UK and NZ overnight as UK inflation exceeded expectations and the RBNZ embraced a much more hawkish pivot with the BoC, Fed Chair Powell and more US bank earnings up next. Broader movements are putting downward pressure on the USD that is nevertheless retaining most of yesterday’s mild post-CPI appreciation. Curves in the US and Canada are slightly flattening with 10 year yields down 2–3bps in the US and 1bp in Canada after US CPI and a soft auction drove US yields higher. Oil is noisy after headlines from a delegate indicating that a new meeting date will soon be set and there is movement toward extending the production increases to the end of 2022 after disagreement with the UAE was settled.

Well done, Governor Orr! A man of action who knows when enough is enough. The kiwi and NZ yields took flight immediately following the release of the RBNZ’s statement (here) that a) announced the abrupt end of LSAP purchases effective at the end of next week and b) removed the prior statement’s concluding sentence that said “Meeting these requirements will necessitate considerable time and patience” in reference to the inflation target and maximum employment. Tomorrow’s Q2 inflation report may have also impacted their decision since it should be the fourth straight quarterly annualized above-target reading. Still the RBNZ guided to look through one-offs and transitory effects on inflation in June and September in terms of the magnitude of the overshoots but said that “more persistent consumer price inflation pressure is expected to build over time due to rising domestic capacity pressures and growing labour shortages.”

UK core CPI increased by 2.3% y/y (2% prior and consensus) with harmonized headline inflation rising to 2.4% (2.2% consensus, 2.1% prior). The largest weighted contributions to price gains came through transport (1.3% m/m) especially via gas and used cars, household services (1.4%), clothing and footwear (+0.8%) and health (0.6%). Sterling appreciated on the back of the release and the gilts curve steepened with 10s up 4bps on the day versus 2s up 2bps. The BoE may talk through some of this as a reopening effect while Delta variant cases soar into a further planned reopening at the end of this week, but higher inflation supports market pricing and a growing move within consensus toward BoE rate hikes by next Spring.

Chair Powell delivers his testimony to the House Financial Services Committee at 12pmET today. See the week ahead (here) for more on potential discussion points. US producer prices for June are also pending (8:30amET) and another strong gain in final demand producer prices of ~0.5% m/m is expected that could continue to put a bit further upward pressure on the year-over-year rate that was 6.6% in the prior reading.

US bank earnings continue to roll in with BlackRock, BofA, Wells Fargo and Citigroup all beating EPS expectations, albeit with mixed details across the bunch such as disappointing FICC trading revenues at BofA.

My prioritized focus today will be upon the BoC. The statement and MPR including forecasts arrives at 10amET and will be followed by Governor Macklem’s press conference at 11amET. Another taper with a greater risk of a more hawkish slant than a more dovish one is expected. Expectations were laid out in the Global Week Ahead (here) and the chart deck version. A few extra points are offered below. Before the BoC we’ll get manufacturing sales during May (8:30amET) with advance guidance from StatsCan pointing to a 1% m/m gain.

I’ve written since the April decision that I expect another taper at this meeting and hence well ahead of the present consensus. Back in February I wrote that the BoC would end purchases by year-end and now think the risks are sooner. We’ll see, but it would be a rather large shock if they passed today and there is probably a greater risk of a slightly more hawkish stance.

Their statements have said further moves would depend upon assessments relative to their expectations and their expectations have ranged from being met if not exceeded across the board. Going down to C$2B/week from $3B would meet their ‘gradual and measured’ guidance for reducing the flow of stimulus. A bigger purchase cut would be a clearly more hawkish and hastier signal. I’d prefer them to end purchases now with RBNZ style conviction, but that would conflict with the BoC’s guidance which basically translates into being slow and plodding along. Further, the RBNZ has been dealing with a full employment recovery to date whereas Canada might have to wait another quarter or two for this to happen (chart 1). Skipping a taper today would risk bunching up decisions and abandoning this guidance while reducing potential optionality later on.

Data flow supports another taper now. GDP growth is tracking their Q2 forecast for 3.5% rather well to date. They haven’t published Q3 yet, but are likely to come in strongly on that figure as reopening efforts gather steam including Ontario moving to its 3rd stage of reopening at week’s end. The restrictions and lockdowns were not surprising to the BoC and were incorporated into their April forecasts when they became known. They expected restrictions to begin easing in late May which they basically did. 84% of jobs lost in April–May were regained in June and reopening will probably shoot well past that when we get July numbers. Their business and consumer surveys showed overshooting inflation expectations that are as good as any other flawed measure to hang their hat on including forecasts and market break evens for distorted/illiquid product. They shouldn’t be worried about a lot of sloppy CAD talk in my opinion, but USDCAD is back to where it was at the April meeting and 4–5 pennies depreciated from May.

This is, however, an inflation-targeting central bank with an indirect eye on jobs. Knowing the base effects, they had forecast headline inflation of 2.9% y/y on average in 2021Q2 **before** pending revisions. I figure that June will land at around 3.2% y/y which means Q2 would average at about 3.4%. Actual inflation is therefore still tracking above BoC forecasts (chart 2). Average core (for which they don’t publish forecasts) is running at 2.3% and it’s an endless debate over what measure of core is best among about half a dozen. Macklem—like some FOMC members—has tended to say base effects are driving this which is as wrong as it has been in the US and I'd expect him to get called out if he does likewise today.

As for pending CPI revisions, June is the month StatsCan will make the switch to pandemic-era spending weights in official CPI which will likely add 0.4–0.5% to headline CPI, meaning that it would actually average closer to 4% y/y in Q2. It’s uncertain what effect this will have on core measures, but we’ll find out next week and I’d bet they’d also get a lift. The BoC will incorporate these new pandemic CPI figures in the next MPR but he may speak to them. Watch for a StatsCan paper on the topic next Wednesday at 8:30amET and a conference call on the topic later that day that will further inform expectations for June CPI and pandemic tracking ahead of the following week’s publication of the June CPI report.

Vaccinations are proceeding much faster than the BoC had incorporated into their forecasts when they said herd immunity would arrive “later in the year” and Macklem’s presser said his risk management focus was why he shaved Trudeau’s estimate for September. Instead, we’ll likely hit 75% later this month and the double dose share of the 12+ population has doubled to ~50% in the past ~2 weeks.

It’s not about just bumps and wiggles in the data flow though. The bigger issue is the need to step back now in order to spread out measures before hiking by mid-2022 when the BoC says is about when spare capacity shuts over 2022H2 that is the driving force in a more strategic sense.

As for the pandemic, Canada is so far in a sweet spot with still falling new case rates while vaccinations soar toward herd immunity 75% vaccinations rates across the 12+ population probably within 2–3 weeks after Macklem speaks today.

Finally, as argued in the week ahead and accompanying chart deck, I’d like to see Macklem grilled in the press conference on the topic of labour productivity, unit labour costs and nominal wages. A fully inclusive labour market recovery that he describes as the ultimate goal would be nice—notwithstanding the BoC’s reliance upon output gap guidance toward sustainably hitting the inflation target as the dominant factor—but the inflation target requires paying very strong attention to productivity which Macklem has been remiss in not doing to date. 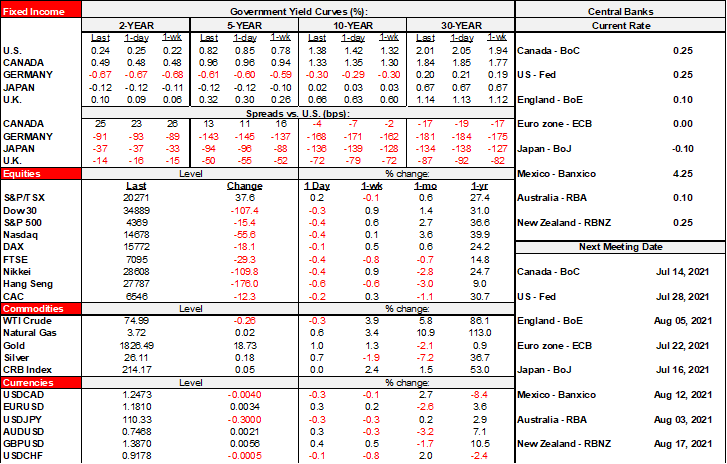