ON DECK FOR MONDAY, AUGUST 30

As a reminder, please go here for my Global Week Ahead and there is an accompanying deck. The publication focuses upon:

The week kicks off with a light calendar and generally little change across global asset classes. What do you expect for late August. It may well be like that until Friday’s nonfarm payrolls, at least in terms of calendar-based risk.

The USD is little changed this morning but holding onto Friday’s post-Powell depreciation. Ditto for US Treasuries with also little change across European yields. Stocks are mixed with small gains across most of Europe and little change in N.A. futures. Asian equities caught up to Powell and posted modest rallies overnight. Oil prices are down a few dimes and not reacting to Hurricane Ida with gas prices a bit firmer.

A couple of European inflation updates are so far largely being ignored by markets. German CPI landed on the screws at 0.1% m/m and 3.4% y/y. That said, only four German states updated into the national tally and so there may be revision risk. Spanish inflation, however, climbed by 0.4% m/m (0% consensus) and 3.3% y/y (2.9% consensus) significantly due to electricity prices while core CPI is running at 0.7% y/y, up a tick from the prior month.

There is nothing material due out today. Tomorrow brings GDP and other than that the election will be in focus. Two polls published over the weekend show the Conservatives in the lead in terms of the share of the popular vote. Nanos/CTV pegs the spread at 33–31–20 (Cons/Libs/NDP) while Mainstreet/iPolitics is much wider at 38–28–19. The status quo of a center-left Liberal minority propped up by the NDP remains the most likely outcome in terms of seat projections based upon poll composites.

The US calendar only has pending home sales (10amET) and the Dallas Fed’s manufacturing reading (10:30amET), neither of which are expected to offer material market effects.

A couple of weeks ago I did a focus on what high frequency alt-data is saying about the US economy. Updates don’t reveal conclusive evidence of a big retrenchment in activity as seen in prior waves. Daily mobility readings by mode of transportation (charts 1, 2) and venue (chart 3) are holding up reasonably well with a small decline in driving that could be at least partly a seasonal effect and so people are still generally going about their business. Restaurant reservations are generally holding in (chart 4) and also in neighbouring Canada (chart 5). Air travel continues to decline which might be because of the Delta variant and some combination of reduced willingness to fly, tighter airline restrictions and a replay of seasonal and other influences like what happened in 2019 (chart 6). Movie theaters’ box office receipts (chart 7) might be a little softer but this is tough to read as a very volatile reading not least of which because it relies upon the flow of movies people actually want to see! 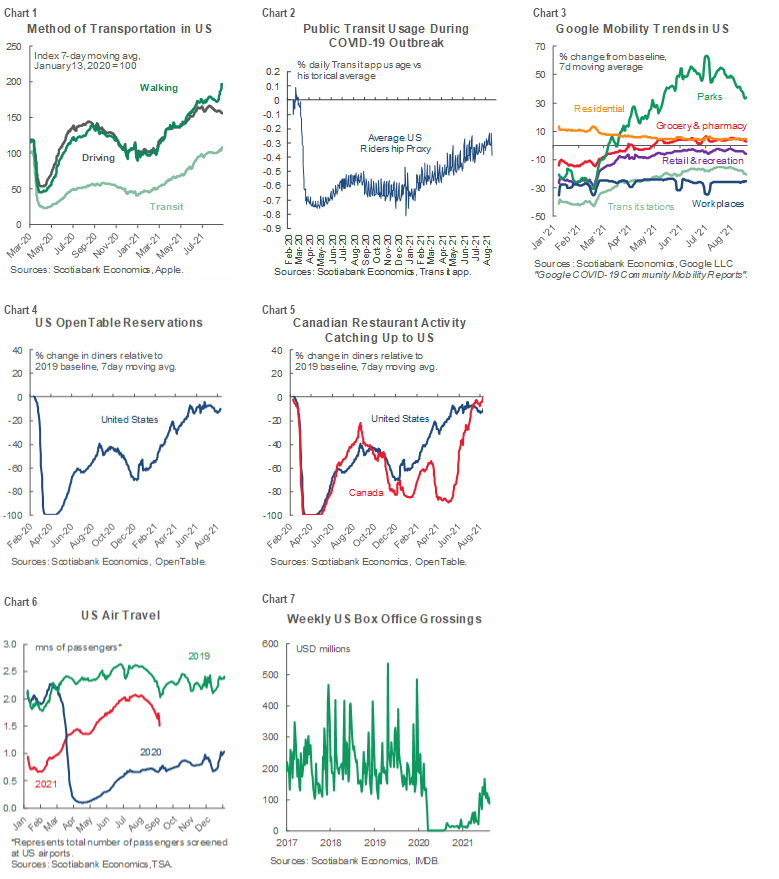 These perspectives offer an incomplete understanding of what’s driving growth as previously argued but can give a fresher sense of what’s happening especially in services. As one caution to going too far with what they mean to interpreting behaviour, widespread product shortages in autos, broad retail sales inventories and very lean resale home inventories offer little to buy.

Here is the weekly Monday sweep through the 7-day moving average of new COVID-19 cases. See the charts on the next two pages.

Canada: New cases continue to trend higher. The rise is spread across the country with the highest per capita new case rates being recorded in Alberta, Saskatchewan and BC. Ontario and Quebec have relatively low per capital rates.

United States: Cases continue to trend higher. The South census region has almost twice the per capita case rate of the next on the list which is the west, but all regions are trending higher.

Europe: Cases in the UK continue to trend higher. Most other countries are either trending lower or flat.

Asia-Pacific: Thailand could be coming off a peak and maybe Japan is getting there as well. Malaysia still has by far the highest new case rate per capita with Philippines much lower but still rising. Malaysia’s case rate is on par with the US south. 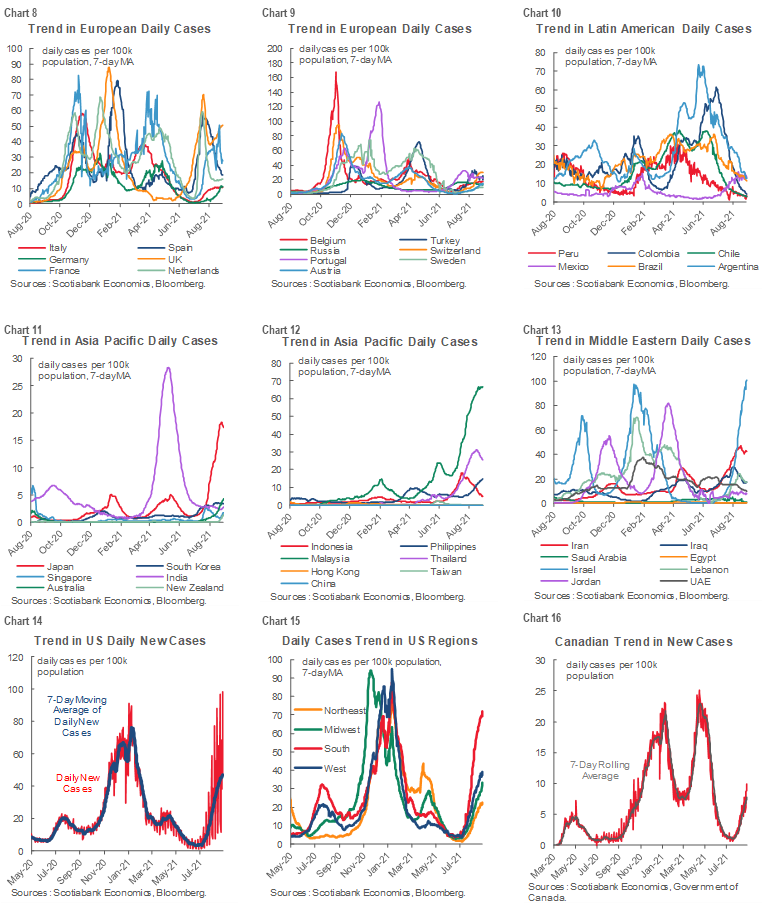 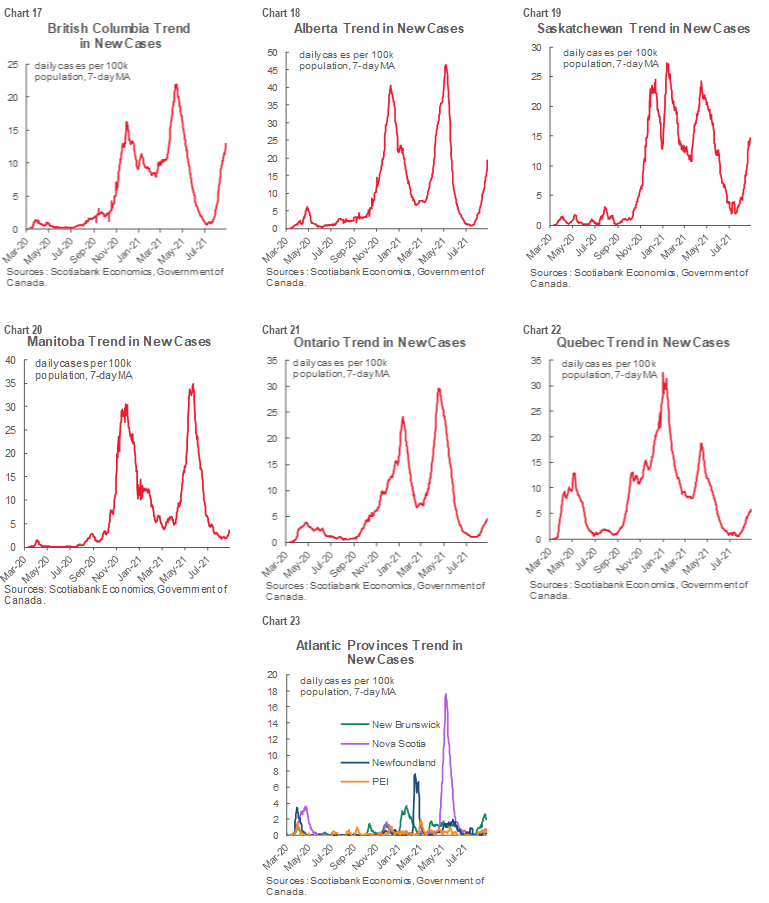 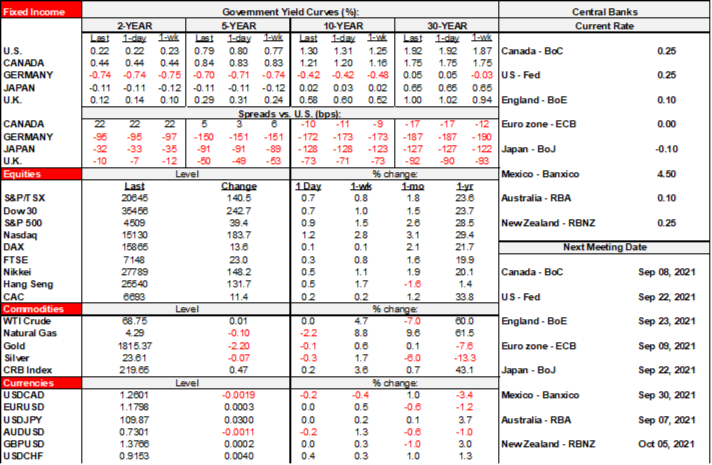